Above image: A panoramic view of the Ukiah Observatory Park shortly before its dedication in April 2014. Credit: City of Ukiah archives.

Editor’s note: Dana J. Caccamise II is the NGS regional geodetic advisor to California and Nevada. Dana has been instrumental in assisting the City of Ukiah with bringing their latitude observatory back to life to allow the public to appreciate the historical scientific significance of this unique facility.

I had the pleasure of visiting the facility with Dana, where we received a fascinating and informative tour from our host, Martin Bradley. Whether you are a surveyor or an astronomer or just have a curious mind, I assure you that you would find a visit to this interesting park, in a lovely California city, worth your time. For more information, please visit this site.

Great Reorganization of the Coast & Geodetic Survey: Military to Civilian

In 1897, the astronomer and mathematician Henry Smith Pritchett succeeded the retired Civil War general William Duffield as the ninth superintendent of the US Coast and Geodetic Survey. Pritchett is credited with the “Great Reorganization of the Coast & Geodetic Survey” out from under a heavy militarized mobilization during the Civil War towards a more civilian scientific organization. 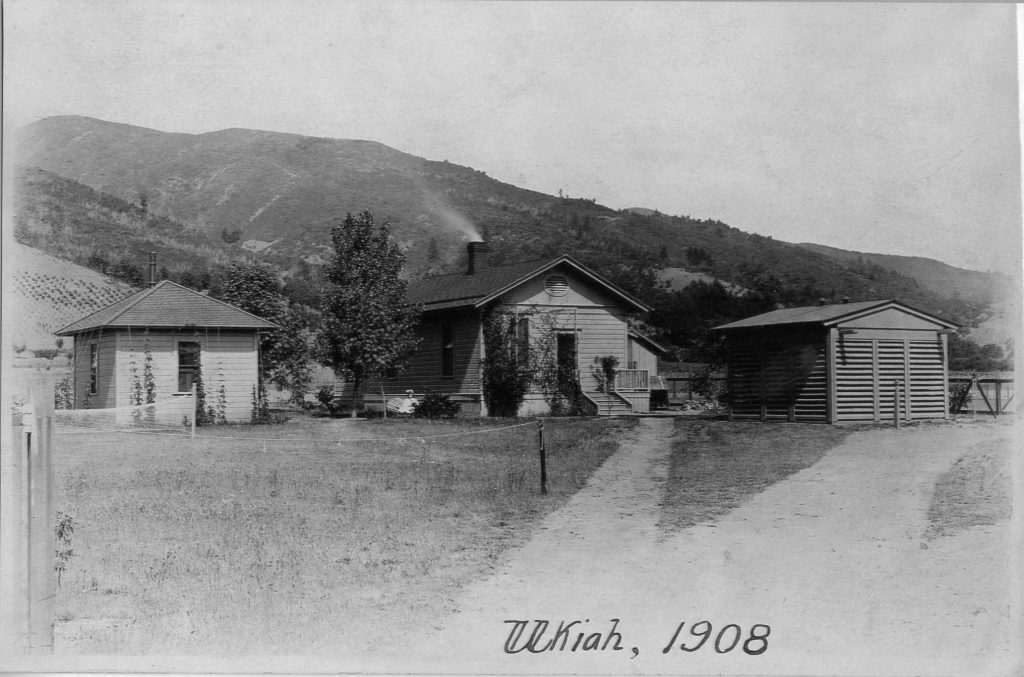 This photo was taken nine years after the observatory opened in 1899 and shows the observer’s office, residence, and observatory. Credit: City of Ukiah archives.

Pritchett served as superintendent for only three years before moving on to become the president of MIT. During his administration, a major reorganization and revitalization of the survey took place, resulting in the “modern” 20th century survey that eventually became a major component of NOAA. During Pritchett’s administration, permanent astronomical observatories were established at Ukiah, California and Gaithersburg, Maryland as American components of the International Latitude Service, also a component of the International Polar Motion Service, both established by the International Geodetic Association.

In 1895, the International Geodetic Association invited the United States Coast and Geodetic Survey (USC&GS) to join in an unprecedented international effort to observe and measure the Earth’s polar motion. This effort was in response to the American astronomer Seth C. Chandler Jr. announcing his 1891 discovery that the Earth’s axis of rotation—and hence the direction of true north—wobbles within the Earth with a period of about 14 months, varying latitude everywhere on the globe.

In 1899, two astro-geodetic observatories were built in Gaithersburg, Maryland and Ukiah, California with three others in Carloforte, Italy; Kitab, Russia (now Uzbekistan); and Mizusawa, Japan (a sixth station was located and operated at an astronomical observatory in Cincinnati, Ohio until 1916 using instruments loaned by USC&GS). All five observatories were located along the same parallel, approximately 39 degrees – 8 minutes.

Latitude observatories around the world used the same observational technique—the Horrebow-Talcott method—by measuring and observing the differences in the angles at which pairs of stars crossed the line of longitude (meridian) at nearly equal distances north and south of a point directly overhead (the zenith). The same star pairs were observed at all of the latitude observatories; any degree of variation between observatories reflected a shift of the Earth’s axis of rotation. Weather permitting, readings from 18 pairs of stars were recorded every night. 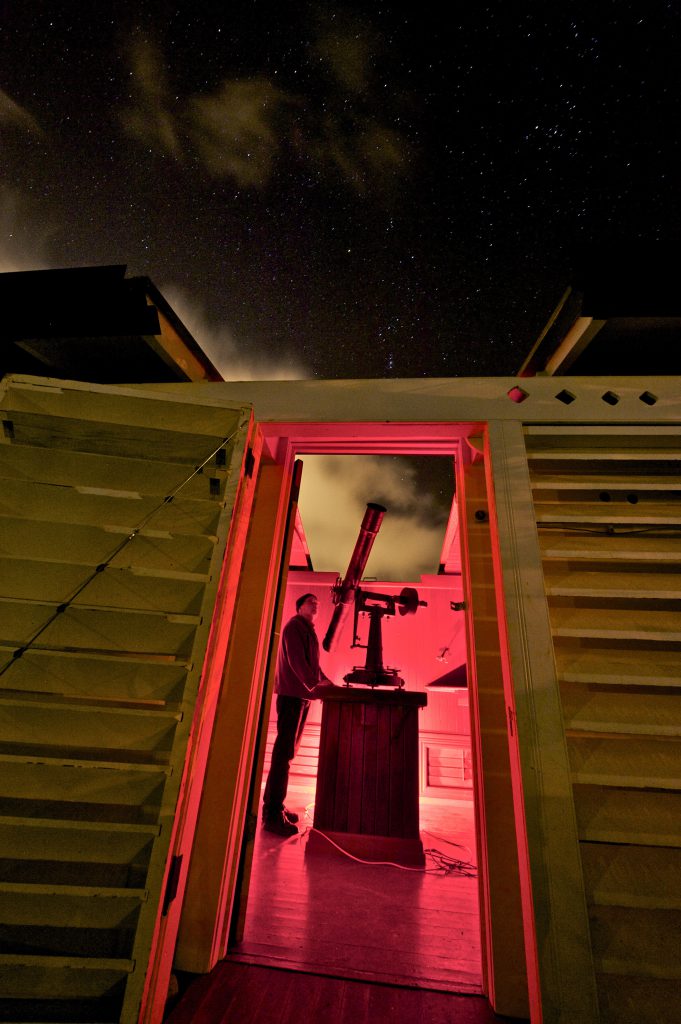 The five latitude observatories were each outfitted with a zenith telescope made by Julius Wanschaff’s precision instrument shop in Berlin. The original telescope with a 100 mm Zeiss objective lens was returned to the Ukiah latitude station in 2015 on an extended loan from the National Geodetic Survey. Credit: Peter Armstrong.

By this method the latitude is determined by observing with a micrometer the difference between the nearly equal zenith distances of two stars that pass the meridian within a few minutes of each other, one north and the other south of the zenith.

The zenith telescope is set to the proper zenith distance for the first star with the bubbles of the delicate level, which is attached to the telescope, adjusted, and read. After the star has been observed, the telescope is reversed on its vertical axis without altering the position of the level. The telescope can now be adjusted to point to the same zenith distance as used for the first star. Since the stations have nearly the same latitude, the same stars can be used at each, thus assuring homogeneous results.

If the two stars are at exactly the same declination δ and the instrument is reversed without disturbing the pointing, then the m, l, and r terms become zero and the latitude becomes δ star zenith angle.

Building plans from the Central Bureau of the International Geodetic Association for the observatory structures were to be “built of iron.” However, the American observatories could not comply due to lack of funds. The new modified plans for observatories deemed them to be built of wood and conformed as nearly as practicable to the original plans.

The observatory at Gaithersburg is built of Georgia and Virginia pine, and the one at Ukiah is built of California Redwood and the roofs covered with heavy tin. The roofs of the observatories are split in two parts that move east and west on iron wheels. The north wheels run on an iron track and the south wheels in an iron groove, accounting for environmental and usability conditions such as wind.

The roof and building walls are doubled for strength and temperature insulation and open to the atmosphere to the north and south, so there is free circulation of air. The roof is easily opened and closed by the observer from inside the observatory by ropes running over the pulleys.

The instruments furnished by the International Geodetic Association were zenith telescopes and accessories, a sidereal clock, a sidereal watch, and a Richard barograph. The Coast and Geodetic Survey has furnished a cylinder chronograph, a sidereal breakcircuit chronometer, a mercurial barometer, and several thermometers. The clock by Strosser & Rohde, Glashiitte I. S., and has a Riefler pendulum. The zenith telescope is one of four made by Julius Wanschaff, in Berlin, specifically for the International Geodetic Association latitude service. 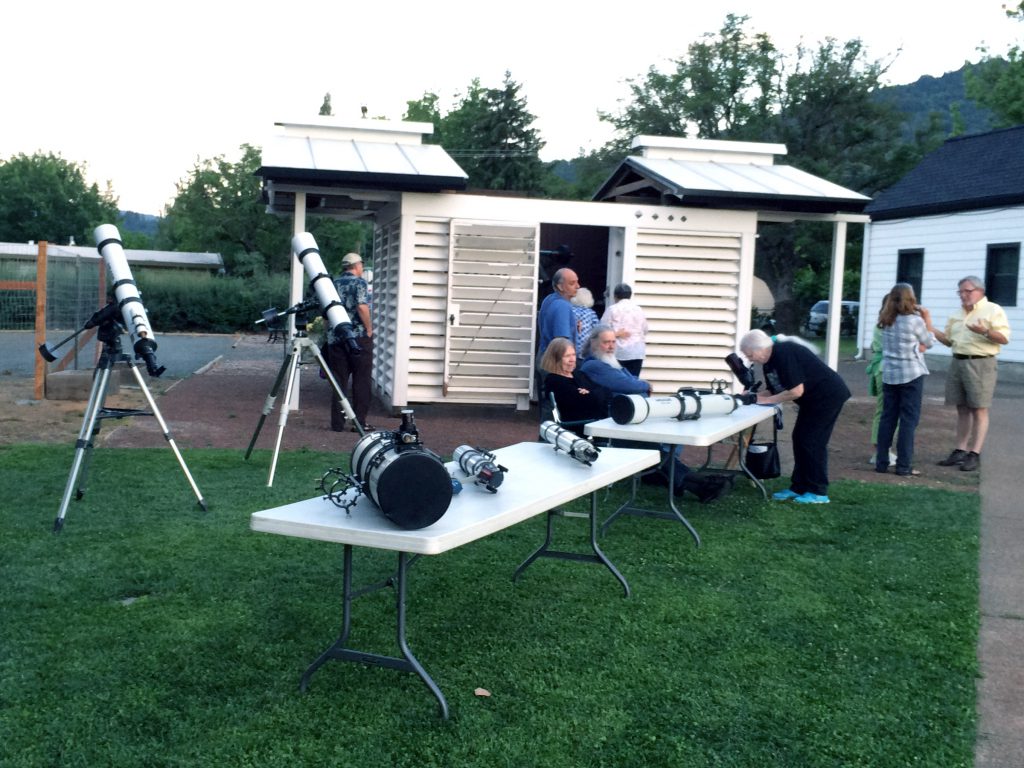 Friends of the Observatory are giving tours; public viewing nights are sponsored at the park by the Ukiah Astronomical Society. Credit: City of Ukiah archives.

Recently, Gaithersburg has had its latitude observatory dedicated as a National Historic Landmark. In 2014–15, the National Geodetic Survey (NGS, the present-day NOAA successor to the USC&GS) loaned the original zenith telescopes to the communities, returning the observatories to their original configuration. The contribution of NOAA observers and the data collected is still important to astronomers and geophysicists and has practical applications in spacecraft navigation and geospatial positioning.

Today we celebrate a rich history and contributions to science, service, and stewardship at both the east and west coast geodetic observatories, through programs and historic exhibits for students and the public.

Through interpretive programs and historic exhibits, the observatory landmarks increase exposure and awareness of NOAA’s rich and formative heritage as well as its enduring modern scientific research and services. Thus, NOAA’s legacy and assets of the International Latitude Observatories will be protected and preserved through activities for education, outreach, and tourisms for the cities of Ukiah and Gaithersburg.

Note: Part of this content was presented as a scientific poster at the 2017 AGU conference in New Orleans, LA and can be found in the NGS presentation library.