The Young Surveyors Network: Is This the Right Approach?

One of the biggest concerns and discussions our profession has these days is regarding the diminishing numbers of young people discovering and pursuing our profession. Combine that with the advancing average age of licensed professional surveyors across the country, other geospatial professions doing some things we used to do, and technology eliminating other tasks, and we are facing a potential crisis.

The good news is a lot of smart, energetic, and enthusiastic people are working on solutions to this potentially huge problem, but we should all be contributing in a positive way.

This month we feature another thoughtful submission from Carl C. de Baca that is wrapped in sage and crusty surveyor goodness. You must read it all, and digest it, to really appreciate the intent – just like a complex deed.

Next month we plan to run a response from the Young Surveyors Network, so stay tuned.

Call me rude, obnoxious, insulting, dim-witted, stubborn, whatever. I’ve heard it all before, and most of it is true. Just don’t call me incorrect; my batting average is pretty high with respect to observations about my profession. You know why? Because I pay attention.

I don’t believe there should be a Young Surveyors Network. There, I said it.

It’s been my experience that the leadership in surveying organizations is made mostly of two kinds of people. I fully confess to painting with a broad brush here, but stay with me and see if you end up picking up what I’m putting down.

The first group tends to volunteer to be chapter representatives, chapter officers, members of specific committees and ultimately committee chairs. They are eager and energetic; they see problems and want to solve them. They fight for causes. These people are activists and idealists and are generally, though not always, younger members of the profession. They may not have the greatest handle on Roberts Rules of Order but they are earnest.   Like a quinoa and kale salad, they are good for the constitution, but maybe they don’t have much flavor. 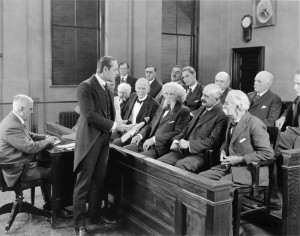 The second group, which I believe to be those who have evolved out of the first group over a long period of time, contribute to their organization by working on the “process.” They tend to gravitate toward committees concerned with order and principle such as bylaws, elections, practices. Issues and threats pass by on either side of these people, but their heads are down, studying better ways to elect officers or putting more “safeguards” in the bylaws and other such things.

These worker bees concern themselves with increasing uniformity, homogeneity, establishing a regular process for every eventuality. They have lost their full field of vision and often fail to perceive advancements, dangers, trends, etc. They are, in effect, wearing blinders.

Unfortunately, most authority and power inevitably aggregates with the second group as longevity becomes their primary benchmark of achievement and success. Only a few short years after the revolution (of which I was an active participant) and reorganization of the National Society of Professional Surveyors, this second group has completely taken over.

More probable is that they never relinquished the reins in the first place. The way I see it, process is now paramount. Ideas seem to be in short supply and too few people are asking for them. Most of the key committees are chaired by names of people who have been around as long as unleaded gasoline.

Over the last couple of years, the entire committee structure of NSPS has been reorganized, and now all of the active committees, where the good work of the organization gets done, are designated “sub-committees” answerable to a gaggle of 70 year-old past-presidents. Oh sure, there are exceptions—I’m not saying there aren’t.

As the newest group on the scene, the Young Surveyors Network strikes me as a reaction to the “Silver Care” ceiling that is the NSPS these days. I haven’t been an old surveyor long enough to have forgotten what is was like to be a young surveyor, full of energy and ideas. I think we are looking at a moment in time when the whole paradigm is shifting, when what it means to be a surveyor is changing and the speed of this evolution is altogether too fast for the Nixon generation still holding the reins. The “Young Surveyors” represents a movement of a new generation who want to become active in the society most relevant to their profession, but sadly no one will get out of their way.

In the five years I have been away from the board of directors, I have pondered this but kept it in perspective by arguing that if the directors could just gain more say, they would drag the NSPS along toward greater relevance and activity by sheer force of will. That was at least part of the reasoning behind the reorganization, or so I thought at the time. But I forgot to take one thing into account.

The directors themselves are increasingly celebrating each other staying five, ten, even fifteen years, as though there was merit in merely showing up I’m sorry to have to say it but Woody Allen is wrong. Eighty percent of life is not showing up; eighty percent of life is doing something while you’re here. (The other 20 percent is reserved for Starbucks and Netflix.)

At the most recent semi-annual NSPS meeting in Silver Spring, Maryland, in March 2017, some directors (with more than ten years’ longevity) brought forward a motion to modify the election of officers by limiting the officer vote to the directors themselves. Citing low voter turnout as the key problem that their motion addresses, they were ready to discontinue democracy.

This is Process Thinking at its worst: “Not enough people are voting, so let’s cut them out.” Actually, it could be that the reasoning was really, “We must control who gets elected to better control the direction of the organization.”  Either way: bad idea.

Low voter turnout is a symptom, not a problem. Hello directors—if the problem at hand is low voter turnout, then how about communicating more vigorously with your membership in order to generate some excitement and interest? And how about, while you’ve got their attention, introduce them to the candidates. And go ahead—advocate for one. Thank goodness common sense took the day and the motion to eliminate the pesky problem of the unmotivated voter by eliminating said voter was defeated. But to even suggest something like that … Boy Howdy!

As I conclude this, uh, rant, I must say that all is not lost. The NSPS is immeasurably important, irreplaceable, really. I profoundly believe in its goals and mission. I drank the Kool-Aid a long time ago.  Critical work takes place within the NSPS that cannot be done anywhere else.

Please, may I have some more?

But, where is the sense of urgency given that contractors are doing their own surveying, home builders are doing their own surveys, non-surveyors are providing drone-based mapping, the BLM doesn’t want to set monuments anymore, a millionaire is sponsoring a contest on the best way to eliminate surveying from the ALTA process, college surveying programs are in big trouble around the nation, NGS is about to change the coordinates and elevations of everything, everywhere. I could go on, but you get the point.

So like I said at the beginning, I don’t believe there should be a Young Surveyors Network. You are us. We are you, or rather we were you. Rather than operate as a separate group, I suggest you organize a not-so-hostile takeover and ask for the keys to the car.

C’mon Pops – you’re going 50 mph on the freeway and your blinker has been on for the last eight miles ...

With modern sensibilities and faster synapses, you are better equipped to deal with the myriad threats and opportunities facing the profession than those at the wheel now. Barge in and make your voices heard, but if you do, be prepared to roll up your sleeves and get to work on a committee.

We need you, more than we are ready to admit.

Subscribe to Field Notes for the counter-argument from YSN in the next edition.