Because I tend to reminisce in my Field Notes installments from time to time, it seems fitting to include the computing workhorse of my generation, the Hewlett-Packard 41C series. It carried me through the most developmental stage of my career and will remain my favorite calculator of all time. 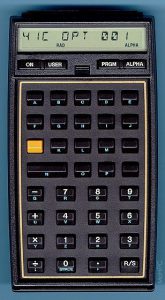 The HP 41C, image credit: the Museum of HP Calculators

The first HP-41C was introduced in 1979 as the first HP calculator to offer alphanumeric capabilities, both on the keyboard and display, providing greatly enhanced programming functionality. However, unlike many of my peers, I never actually wrote any programs for my 41-C series calculators because the expandable modules offered everything that I needed. Oh, and I was an epic failure at programming of any kind.

In addition to the alphanumeric capability, the HP-41C (first version in the series) came with 63 “registers” of memory, which could be reassigned between storage memory and program memory. The four ports on the top allowed users to plug in additional RAM modules, offering additional register or program space. It was revolutionary!

I was first introduced to the legend in 1983, when my employer at the time presented me with a brand new 41C as my going–away gift after having been his only employee for the previous two years. I was relocating for my wife to attend college, then my plan was to attend engineering school upon her completion. As an appreciation for my service and encouragement to pursue engineering school, my boss invested about $300 in me, which was a lot of money back then—certainly, more than I could afford. At the time, I had no idea how much that investment would pay off. Thank you, Mr. Schneider.

Upon relocation in August of 1983, I quickly landed a job at an engineering firm working on the field crew and performing office duties as needed. My party chief also had a 41, but his was the newly released CX model, which had advanced memory capabilities and a time module, and a few additional features. Still, my C model was useful in the field and I soon bought a leather pouch for it.

But, I needed more functionality in the form of modules, so I bit the bullet (about $400 if my memory is correct) and invested in the CX with the survey module. With each module came an overlay board to show the keyboard functions when running that module. Brilliant!

Besides my growing field role at work, I was starting to study for the Land Surveyor-in-Training (LSIT) examination and enrolled in evening survey courses at the local community college. I was quickly becoming familiar with my new and powerful 41CX and loving it. Horizontal and vertical curves? No problem. Traversing and inversing, including areas calculations? A breeze. Bearing-bearing intersections? Simple.

Writing down coordinates (or storing them) and watching the “goose” fly across the screen was a small price to pay for having a computer in my hands. I was using it so much in the field that I bought customized Ziplock–type baggies to seal the dust out of it. I went through a bunch of those in the day.

Over the next few years, I successfully passed the LSIT examination and the California Professional Land Surveyor examination and enrolled in engineering classes full-time. I had purchased the statistics module, at least, and rarely went anywhere without my 41CX on my hip or in my backpack. Although a few of my classmates in the engineering program had 41C series calculators, none of them had logged the hours on them that the “old man” in the classes had.

We were taught two methods of solving what the result would be on that object: which direction would it move and how

fast? The forces were typically given something like this: Force 1) 10 Newtons up by 6 Newtons to the right, and so on. 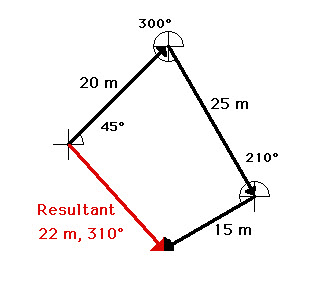 One method was to use right triangle trigonometry to calculate the hypotenuse magnitude and direction for each force to get the “resulting vector” from that force. You then linked each resulting vector for all the forces given in the problem head-to-tail in any order. Then you used trig to solve for the final direction and magnitude.  The other method was to plot the vectors at scale using a protractor, then measure from the head of the last vector to the tail of the first vector. This required careful “drafting.”

As my study partners started breaking down each vector, it suddenly dawned on me that this was simply an open-ended traverse with an inverse from the beginning to the end of the last leg. I pulled out my 41CX, fired up the survey module, assumed some coordinates, and went to work. I started writing down coordinates along the way. My study partners had no clue what I was doing, other than apparently wasting time. I got to the end of the traverse, then inversed back to the origin and blurted out the resulting vector “answer.” We had the solutions book, which verified that I was correct. Their jaws dropped. Freaking magic! 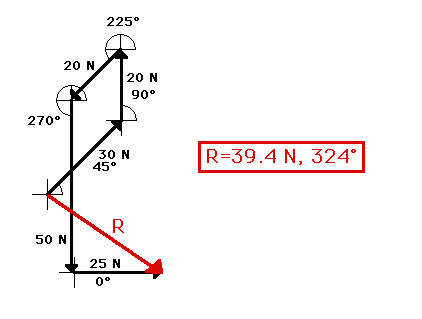 They asked how I did that by writing down gibberish, and I said, “It’s simply an open–ended traverse and an inverse back to the beginning.” What? The “old man” knew great things, in their minds, but they had no idea what I was talking about and were doomed to slog their way through one of the other methods. I was elevated to a new standing that day.

Fast–forward a few years. A colleague and former mentor (the same party chief who showed me the CX) who ran the survey program at a small engineering firm had purchased a new HP-48 as a data collector. He stopped by our firm to excitedly show off his new “toy.” Another PLS from our firm was there too. He explained how he was going to use it as a data collector; then we asked to put our hands on it. The display was foreign compared to the beloved 41, but it was just another HP calculator with reverse polish notation, right? For the next 20 minutes, the three of us tried, and failed, to multiply any number times Pi.

I believe they did deploy the 48 as a data collector, but I realized that afternoon that I had attained my calculator user plateau with the mastery of the 41CX and that no successor could ever compare. That remains true to this day. I now have several 41C series calculators in my “fleet” along with many accessories, even though I haven’t needed to use one for surveying calculations in many years. But I have no doubt that I could. The LTCME entry option for solving horizontal curves is still etched in my memory. As is the day I performed magic for my classmates.