A Canadian UAS provider uses a special UAV with lidar to transform their airport business into supportive infrastructure operations and runway-scanning projects across North America.

The skies above Edmonton International Airport (EIA), Canada’s fifth-busiest airport in terms of passengers, are filled with thousands of annual departures and arrivals that need to be carefully monitored, controlled, and directed.

As the airport experiences continued growth and development, an abundance of surveying and topographical work needs to be accomplished by companies that can navigate the busy skies, aprons, and facilities in and around EIA. AERIUM Analytics is one of those companies, and they’re incorporating integrated unmanned aerial vehicle systems (UAS) to deliver more accurate data, safely and efficiently.

AERIUM Analytics is a Canadian UAV services provider based in Calgary, Alberta that specializes in operating in challenging airspace and related environments. They provide everything from UAV flight services to data processing and analysis, including a large range of videography, mapping, inspection, and wildlife-management capabilities.

“The focus on safe and compliant UAV operations within controlled airspace is at the forefront of our service model,” says Jordan Cicoria, vice president of operations at AERIUM.

“We don’t just stop at collecting the data and passing it off to the client,” says Cicoria. “We also do a lot of analysis and help give operations teams or business decision-makers the intel they need in the most simplified manner possible. This enables our clients to make better business decisions quickly or do just-in-time maintenance on the regulatory and compliance side and helps people maintain their operations safely, efficiently, and effectively.” 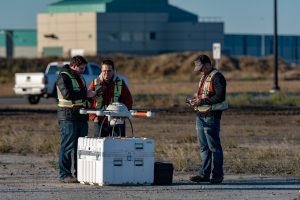 Currently, their largest client is Edmonton International Airport, where they originally began deploying a UAV they acquired through a partnership with Microdrones—the mdLiDAR1000—in the fall of 2018 for scanning and analysis.

Brandon Southgate, AERIUM’s remote sensing and geomatics specialist, helped conduct the research that directed him to Microdrones. “We found that the entire combination of the lidar and Microdrones platform would fully suit our needs and provide the most efficient data collection,” said Southgate. “It’s a good, solid quad-copter that we felt we could trust to complete our operations both reliably and safely.”

For runway scanning and analysis, the mdLiDAR1000 works well for airport infrastructure and maintenance analysis at EIA, according to Dr. Mohamed Mostafa, the director of mdSolutions at Microdrones.

In addition to increased accuracy, using the mdLiDAR1000 can greatly reduce the amount of time needed to collect, analyze, and produce the data visualization when compared to traditional surveying methods. This was one of the key benefits that AERIUM recognized at EIA.

“EIA is spending a lot of time and effort to be an economic driver for the region, and the airport is continually expanding its commercial development,” said Cicoria. “The development at the airport has been incredible, with hundreds of millions of dollars of investment and job creation that’s happened over the last few years.

“Amidst all of this development, they’re still very much using traditional surveying methods. They have guys walking around shooting points, but it’s taking much, much longer than what we can do with the UAV.”

In the fall of 2018 AERIUM conducted several missions at the airport to gather baseline data. First, they used the mdLiDAR1000 to collect point densities for an old borrow pit near the runways and aprons. The area had been identified for commercial development but was basically a big clay pit and a giant hole. One of its main challenges was it was located behind hills, making it take much longer to survey using traditional methods.

In addition, a little over a thousand feet away another area had been designated for development surrounding a canal. However, surveying deadlines needed to be met very quickly so that the engineers could start to process and design. The initial deliverables were getting a baseline data set and point cloud to help with a topographical analysis and review of drainage at both areas.

AERIUM flew the UAV multiple times at a height of 75 feet to collect the data within a hundred feet of the apron, just on the other side of the security fence with aircraft operating nearby. The integrated system allowed AERIUM to capture the data accurately and much faster than traditional methods, coming in under two hours for both of them.

“The speed is incredible,” noted Cicoria. “They’re taking days for traditional versus what we’re doing in a couple of hours, with the ability to turn around the deliverables in only a day or two. That’s pretty impressive.

“In addition to that, you’re flying in an airspace where quite literally there’s helicopters and Cessnas flying at 300 feet. Therefore, we can rely on the ability of the UAV to pause, stop mission rapidly, descend, and then restart the mission when ready.” 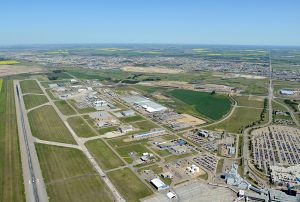 An aerial view of the northeast section of EIA.

Performing UAV missions such as these—within plain sight of active runways at EIA or in controlled airspace—is a complex process that requires training, certifications, insurance, clearance, and communication. AERIUM Analytics has been working closely with EIA to safely integrate UAS technology at the airport.

In fact, in 2017 their combined efforts helped lead EIA to become the first airport to enlist a full suite of UAS services into their daily airport operations. Those services included using drones for wildlife management, mapping, and inspections to support EIA’s maintenance and development.

“It took a lot of close coordination and working hand in hand with EIA’s operations teams and their commercial development team, in addition to working directly with Nav Canada,” explains Cicoria. NAV Canada is a private, non-share capital corporation that owns and operates Canada’s civil air navigation service.

“We did this all as a team approach and to get to the point where we can do these missions on a daily basis. It’s taken months and months of planning, communication, and trust, more than anything.”

AERIUM Analytics is now moving into its third year of operations at EIA, conducting UAS services almost on a daily basis, having demonstrated the benefits of using the technology at the airport. For each mission, they still have to ensure that they have all the appropriate pilots’ licenses, insurance, and trusted airframes. The mdLiDAR1000 is listed on Transport Canada’s list of drones eligible for advanced operations.

“It helped that the Microdrones systems were on the compliant airframe status list before it became the safety assurance list,” said Cicoria. “Because now we have something that can fly in controlled air space but also can fly near people. So we moved to having only a five-meter separation requirement and not the 30 meters that other units might have.”

Communication also plays a critical role in the use of UAS services at the airport. Each mission is conducted under tight supervision among the operator, Nav Canada, and air traffic controllers.

“Every single operation we do within that control zone requires Nav Canada communication, authorization, and approval,” says Cicoria. “So, we can’t put a UAS in the air without Nav Can being fully involved. And a lot of that involved us having to do these massive safety cases at EIA, to go in and around evaluating the potential risks to aircraft, to people, and to the drone itself.” 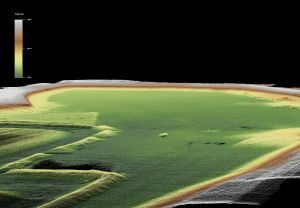 A lidar point cloud of a drainage channel and borrow pit collected with the mdLiDAR1000.

Between the communication, certification, and collaboration, AERIUM Analytics has established that they can meet the highest levels of safety and operational standards. Not only has this led to further opportunities at EIA, as development continues at the airport, but other similar infrastructure and runway scanning projects at airports in the Yukon and the United States.

“We started at the airport only doing the wildlife side, and now we’ve moved into supportive infrastructure operations using systems like the mdLiDAR1000,” Cicoria said. “This summer we’re going to be actually scanning runways and their aprons as well. So, it’s led to new work with the airport. It’s led to a stronger relationship and to us being able to offer multiple service lines at the same time.

“In addition, we really focus on not just providing the data in a more safe and economical manner, but more importantly that we’re solving problems and providing solutions that keep people in compliance and keep the people safe and really have that comprehensive service that gets us in places that you normally wouldn’t see UAS operating.”