Some members of the 2021 land surveying class at Cincinnati State have been busy bringing history back to life near the city of Lawrenceburg, Indiana. This team of students had the opportunity to survey the site of a village where indigenous people lived before the arrival of Europeans.

The site, located in Dearborn County, Indiana, is the current focus of the Archeological Research Institute (ARI), whose mission is to educate residents about the past cultures of Indiana, Ohio, and Kentucky through research archeology and cultural preservation efforts. To accomplish this, ARI needed to identify the boundaries of their diggable area, gather topographic information about that area to identify ancient structures and features on the land, establish control to lay out features on the site as needed, and to make the dig site both accessible and enjoyable for the public.

To help ARI, Carol Morman, program chair and professor of land surveying at Cincinnati State Technical and Community College, arranged for a team of five land surveying students to take on the project as the culmination of their degree program. 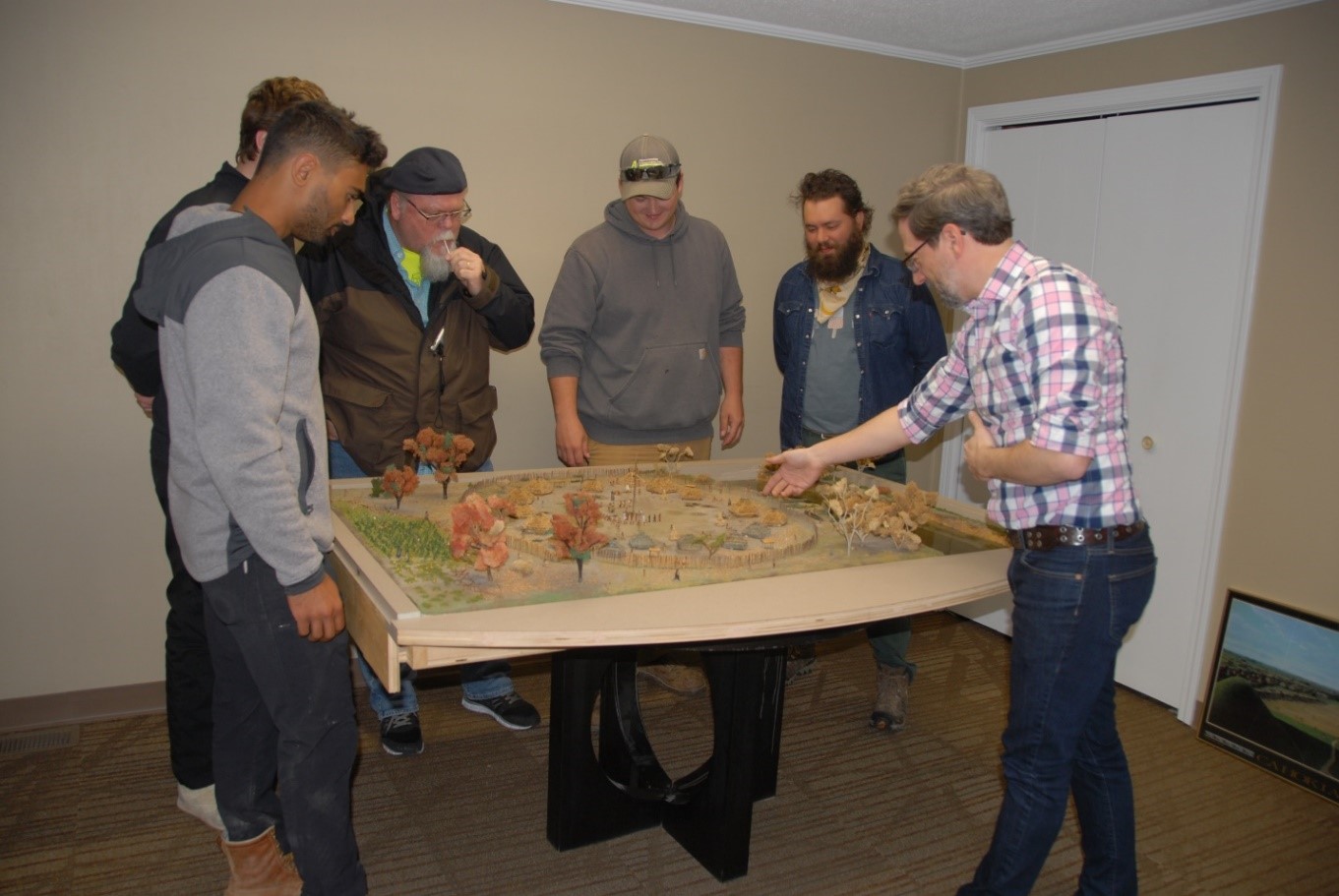 While the project was presented as a simple retracement and topographic survey, there was a unique obstacle in the make-up of the team. Each student was also working full time, meaning work needed to be done on weekends with smaller tasks needing to be completed after everyone’s day job. This limited timeline quickly became problematic as several weekends were lost when the site was entirely underwater due to its location in the floodplain of the Great Miami River.

After overcoming and outlasting the elements, the fieldwork began to take shape. The topography was handled by two crews running Trimble S3 instruments simultaneously, with one crew working on the wooded area of the site and another focused on the open areas. The topographic survey was necessary to be able to see the differences in the elevation of the ground to find more artifacts and other features of the ancient settlement.

Three-wire level loops were run to the site to establish elevation from a nearby NGS benchmark. With the help of the ARI executive director Liz Sedler and senior archeologist Marcus Schulenburg, the Cincinnati State students were also able to map the locations of known buildings around a Native American settlement, and what is thought to be a protective perimeter wall. These structures had been discovered by an earlier magnetic survey conducted by ARI that uncovered evidence of the settlement and helped establish where the huts and the protective perimeter wall are in the ground. To provide a more interactive format for the topographic map, a secondary survey of the site was performed by LJB, Inc., a cooperative education partner with Cincinnati State.

A drone specially fitted for survey work was utilized to create a 3D picture of the project site and allowed for a check to the topographic data collected by robotic total stations and GPS. The drone survey data will be an invaluable teaching aid for ARI’s work in educating the Lawrenceburg community about the history of the area.

The students of Cincinnati State also set control points for ARI to use for future mapping of dig sites. These points were concentrated toward the eastern portion of the property to provide enough space for work to continue while mapping is taking place in the future.

The class was able to find an undisturbed rebar in the middle of a plowed field and was able to utilize it to help de-fine the western line of the property. There were also several monuments found that proved to be less than helpful in defining the boundary. Near the southeast corner of the property, there were three existing features that could reasonably be considered corner monumentation. Two of these were rebar set in concrete and encased in PVC piping, and the other was an angle iron.

With the retracement and the topography of the property completed, it was then the goal of the class to show ARI how the land could be used to allow for guided access to the dig site for tours and information sessions. An improvement plan was prepared for this purpose. Part of the land that had not been marked as a building location was chosen as a possible site for a small parking lot and a walking path was shown that would follow both the perimeter of the village and a row of ancient building sites through the village. The exact location will not be provided as per safety and preservation concerns but is available upon request.

As the students finish their time in Cincinnati State’s land surveying program, they can add this unique experience to their ever-growing body of knowledge. By locating and mapping the sites of these ancient buildings, they have helped preserve the information under the surface. This is information about a culture that could have been lost, and can be used to teach us about society and humanity.

This project was completed as part of the requirements of the Bachelor of Applied Science Degree in Land Surveying at Cincinnati State. The Surveying Capstone course is one of the final courses that students in the program take to show their proficiency in land surveying before graduation.

ARI is a non-profit organization based in Lawrenceburg, Indiana, near an Ohio River site occupied by past cultures. Under the guidance of ARI’s staff archaeologists and volunteers, students of all ages have unique and immersive hands-on opportunities to unearth artifacts and features, document and preserve them, and learn about and appreciate the cultures that lived on our land long before us. 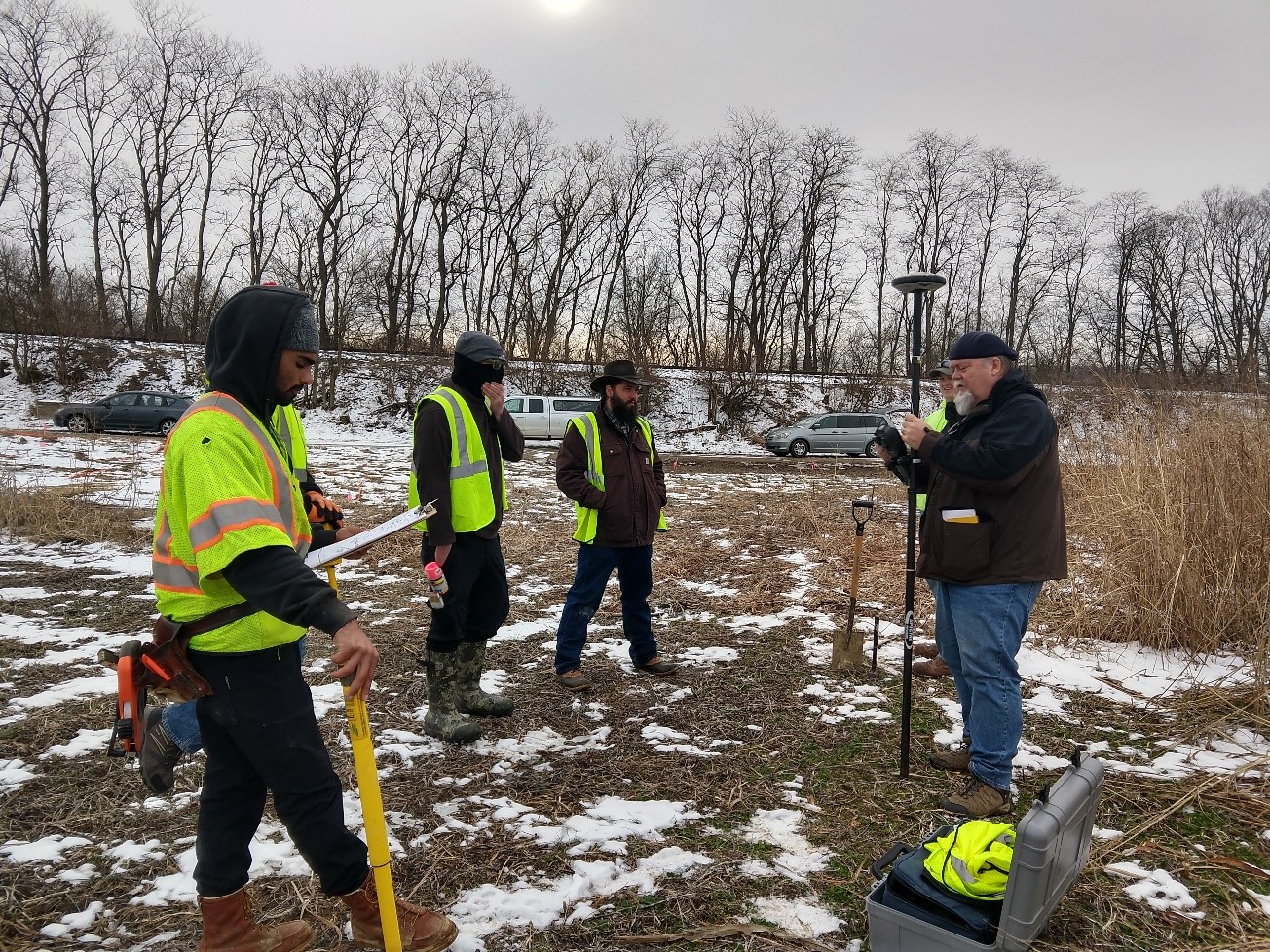