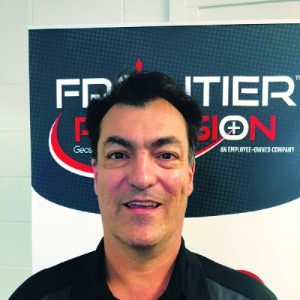 Frontier Precision has been in business since 1988, selling and supporting Trimble, Nikon, Zeb-Revo, and Spectra Precision hardware and software.

One thing I get a kick out of at work is, after listening to the customer, showing them the exact thing they need to do their job.

My wife and I live in Honolulu on the island of Oahu, Hawaii. We moved here to open the Pacific branch of Frontier Precision. Hawaii is the most beautiful place, with the most beautiful and open people. If you’re humble and open to the people here then they are open and accepting in return. Their inner beauty and spirit could teach all of us so much.

Playing music in Hawaii has been one of my best experiences. The musical groups have a rich heritage, keeping the spirit of Aloha alive and vibrant. On my first night in Honolulu to scout out the logistics of moving there, I stopped at a tiki bar where an amazing local band was playing. I met the conga player during a break—I bought him a beer and we struck up a great conversation. He said jokingly that I should sit in a jam with them. 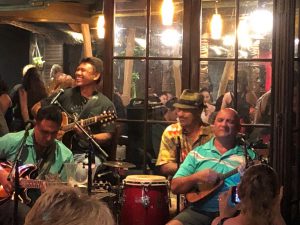 During the next set as he was leaving for a break, he motioned that I could sit in. Now I’m honored to have been sitting in on percussion with this group every Wednesday for the last year as “Brennan, the geologist from the bar.” 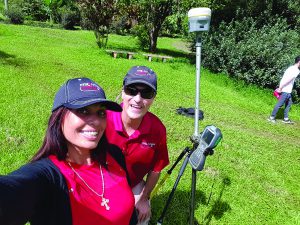 My wife, our dog Sparky, and I have been stand-up paddle boarding off Waikiki for several months now. One day we wanted to check out a pet surf competition, so we practiced getting Sparky on the paddle board on the way to it. We paddled around the competition to the ocean side and sat out beyond the waves for a good view. While we were there, a catamaran that takes tourists out for a “booze cruise” passed us, and the whole boat started taking photos of us. Me, being an opportunist, yelled at them, “You have a couple of beers for my dog?” One of the crew promptly threw us two beers. Now we have made it a custom, about once a month, to cruise off Waikiki beach hustling beers from the booze cruises. 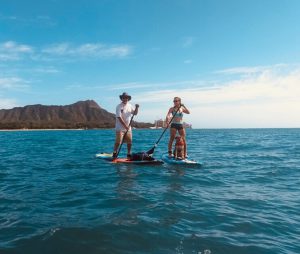