Crafton Tull, an engineering and surveying firm, was tasked with the daunting job of surveying up to 160 acres to collect data needed to design a new road through the heart of the Ozarks. 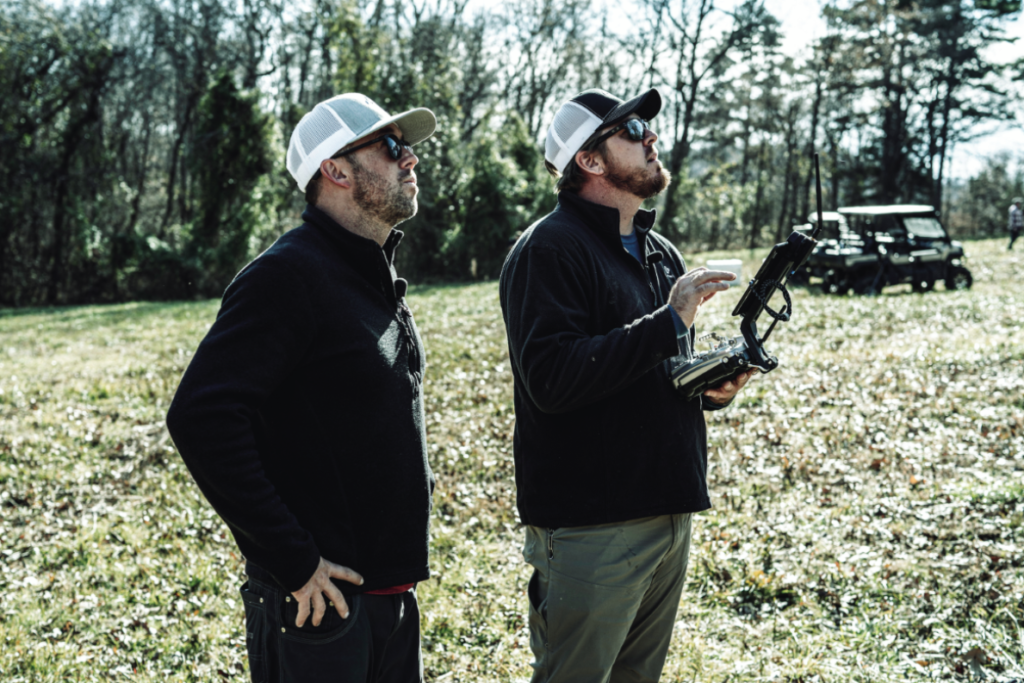 Jeff Davis (left) and Nick Tucker (right) monitor the mdLiDAR1000 as it collects data during the Big Creek surveying mission.

In an area known as Big Creek, located in a remote valley of the Ozarks, Crafton Tull had been awarded the job of surveying up to 160 acres of Timberland to collect data needed to design a road from the top of a mountain down to the Big Creek River, where the client planned to build a cabin.

Upon reviewing the project, Tucker and Davis determined using an integrated lidar drone system—the Microdrones mdLiDAR1000—would be their best option to survey the area and generate the point cloud visualizations needed to complete their mission.

The Microdrones mdLiDAR1000 system combines a UAV with lidar and direct georeferencing technologies. By using this drone package, the team could collect data much more quickly and safely access dangerous parts of the job site.

The integrated lidar technology highlights the object of interest with a laser, cutting through layers like tree canopy, to collect data all the way to the ground. With lidar, surveyors can create 3D digital terrain models in locations with rugged topography and dense vegetation, making this system the choice for the Crafton Tull team as they were tackling their mission in the Ozarks.

Crafton Tull Down to Earth

A year and a half previous to the project, Crafton Tull became an early adopter of drone technology based on a close working relationship with both their supplier, Navigation Electronics, Inc (NEI), and the UAV manufacturer, Microdrones. That was why they also agreed to further complicate the mission by allowing a film crew to document the project for a new surveying reality series called “Down to Earth.”

Presented by Microdrones, the series showcases the data deliverables their integrated systems can create, like 3D point clouds. A camera crew captured on-the-job footage as the team from Crafton Tull and Microdrones planned and performed the Ozark surveying mission.

The project wasn’t all smooth sailing. The mountainous terrain, remote location, and scale of the job presented many challenges for the team. On top of these difficulties, they had to navigate an elevation change of more than 500 feet. As they worked through hardships and hazards, the team encountered setbacks and complications.

“Down to Earth” allows viewers to better comprehend these obstacles and demonstrates why an unmanned aerial system was the best tool for the job.

After a preliminary overview of the site in Google Earth followed by a couple of hours of on-site analysis, Tucker and Davis selected a high, outcropped area at the east end of the project for the UAV takeoff site. From this vantage point, they had just about a full view of the 160 acres and would be able to keep the drone within line of site.

“Without Microdrones and with a regular survey crew, you’re looking at probably two to three weeks’ worth of fieldwork to get this surveyed,” explained Davis. “It’s dangerous, too, because there are some sheer bluffs that would be really challenging to get data on.”

To collect the most accurate data, the team decided on a flight speed of 4 meters per second at an altitude of 50 meters above the tree line. Mission-planning software calculated the total flight time to be approximately 86 minutes. Therefore, the team estimated five to seven flights to collect all the data and survey the 160 acres.

However, the takeoff site itself was almost 3,000 feet away from the first waypoint of the flight mission. At that distance, even with the on-screen display, depth perception made it very difficult to tell how close the drone was to the top of the tree line.

“I try to lean on Jeff as much as possible whenever we’re flying to get feedback if I’m watching the controller and he’s watching the drone or vice-versa,” explained Tucker. “You really just couldn’t tell how high it was looking at the screen or even looking at the drone across the valley.”

Rather than put the drone at risk, the team decided to bring it back, land safely, and determine a new course of action.

Fortunately, Randy Woods, the local property manager who provided the team access to the site, was familiar with the layout of the land. He helped reduce the scope of the project and identified an area on the side of the mountain that would be feasible to design the road.

“Randy identified a gap in the mountain that had about a 15- to 20-foot drop versus a 100-foot drop, which we couldn’t see from our takeoff site,” said Tucker. “That allowed us to relocate, update our plan, and focus on the valley area alone where we could create one corridor line to fly the drone and collect the data.”

Presented with Woods’ insight, the team scoped out the new area and made their project adjustments. Gregg Long, LEED AP and vice president at Crafton Tull, joined the crew on site and walked the route with Woods, collecting GPS data to provide waypoints for the mission.

“After Gregg and Randy walked that route,” Rosenbalm explained, “they exported a KML file which we used to build a corridor mission of the proposed road, focusing all of our efforts on the only place in this whole project where a road could potentially be built.”

There was still a large change in elevation from the top of the corridor to the bottom of the valley, with a cliff to negotiate in the middle. Therefore, they separated the plan into three flight blocks to safely navigate the drone, collect the data, and complete the mission.

For the first and third flight blocks, the team used the mdCockpit flight software to plan and build their missions and fly the predetermined routes. Since the second portion of the flight covered the bluff, they decided to manually fly that block to keep the drone a safe distance from the cliff walls and within visual line of sight.

“That was a group decision where all three of us thought it would be best to fly the drone manually,” said Davis. “With the large drop-off, we felt it would be safer to stand on the edge of the bluff and fly the drone a safe distance from the sides of the cliff and the tops of the trees.”

“Going into the project, we knew it was going to be a great challenge,” said Tucker. “We were able to overcome those challenges in a short time and capture all the data we needed for the designers and the client. The data we’ve processed looks very good, and everyone’s going to be satisfied.”

“I always like to see what kinds of projects they’re using our systems for,” Rosenbalm said. “This one has obviously put everything to the test.”

From the outset of this project, the goal for Crafton Tull was to capture enough data to provide a surface model and a set of contours for their engineering team to design the road down the mountain. Having successfully surveyed the area using drone lidar, they were able to quickly process and visualize the data.

After downloading the data, it was imported into Trimble Business Center to create a point cloud with 75,000,000 points, which helps visualize the ground, vegetation, and trees. Then by classifying the point cloud, Crafton Tull was able to generate a ground model of the bare earth.

The final deliverable was a surface model of the mountainside that was color-coded by elevation, with red representing the highest elevations and blue the lowest. The data also captures the bluff, where you can see some of the steep drops in elevation.

“The surface model is the tangible deliverable that we actually give to the engineer,” Tucker said. “It carries all the weight and material needed to be able to design the road.

“By looking at the model, you can also see where there was a natural washout along the bluffs and a smaller change in elevation. This was the area that Randy had scouted out before and recommended to us for the survey.”

To those on the inside selling commercial drones, it appears that educational content like the “Down to Earth” video, along with other efforts to inform industry professionals, is paying off. While some surveyors may still be nervous about launching into the world of unmanned aerial systems, NEI representatives say the market is quickly catching on.

Ross Kenney, UAS sales and support lead for NEI, recently participated in the Association of Professional Land Surveyors’ Annual Survey Convention in Mississippi. He and the NEI team displayed a wide range of surveying products in their booth but said the UAV system drew the most interest by far. The team said that it was obvious that more surveyors are starting to understand the value, and the difference in understanding since last year is profound.

“We’re going to see huge growth in UAS in the very near future. In the next five to ten years, UAV systems will go from a novelty or a luxury to an expectation or the norm,” predicts Kenney. “Every topographic survey project will have a drone being used in some capacity. They are just so much more efficient than sending a whole crew with boots on the ground to complete the survey.”

Rosenbalm agrees. “People are definitely starting to adapt to the technology,” he said. “And those who have invested are definitely on the leading edge, but I think we will see a leap in the next year. People who are already using it will be ahead of the game. You’re going to see people rush to get into the game soon, within the next year or so.”

Expert projections corroborate these expectations. At the beginning of 2019, the Federal Aviation Administration issued a five-year unmanned system forecast that predicted that the number of registered non-model drones will increase to three times the current number by 2023, and that commercial UAVs would make up a significant portion. The report also admitted that the number of professional UAV registrations at that time exceeded their own past predictions by 80%.

The first three episodes of “Down to Earth – The Ozarks” are available on the Microdrones YouTube channel and at Microdrones.com. 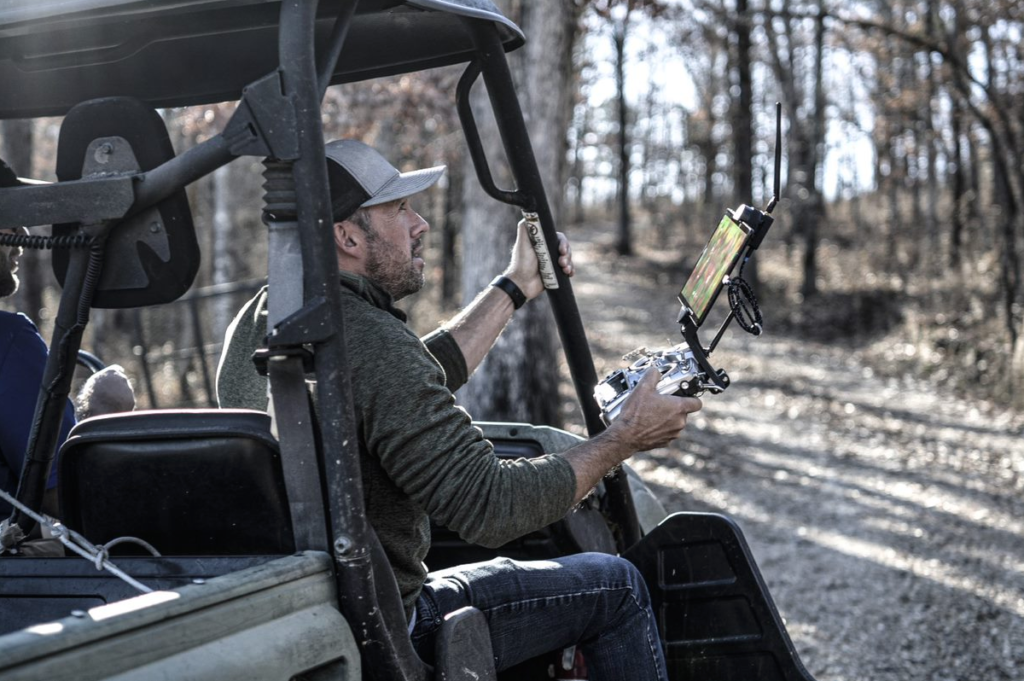 Matt Rosenbalm (left) and Jeff Davis (right) follow their surveying drone in an ATV to keep the mdLiDAR-1000 within visual line of sight.