How Aerial Surveys, an independent aerial photogrammetry company, survived the wave of consolidations and continues to grow.

Aerial Surveys International (ASI), based in Watkins, Colorado, provides aerial photogrammetry services using digital mapping cameras, film cameras, and lidar devices. It has remained independent through a wave of consolidation in the aerial mapping business and is now on the verge of offering a new line of services with Phase One cameras. For the past two years, ASI has been using Phase One cameras in conjunction with lidar and has been comparing them with its film cameras, with excellent results.

ASI was founded in 1998 by Ron Macke, who owned American Reprographics, and Mark Schubert, a pilot and mechanic who worked for another aerial mapping company and owned an aircraft-leasing company. They noticed that in the Denver-Rocky Mountains region nobody had a camera on a gyro mount or the latest innovation at the time, forward motion compensation (FMC).

They bought a twin-engine Cessna and a Zeiss Jena LMK-2000 aerial survey camera that was on a gyro mount with FMC and tailored their services to local mapping companies for engineering-type photogrammetry mapping. 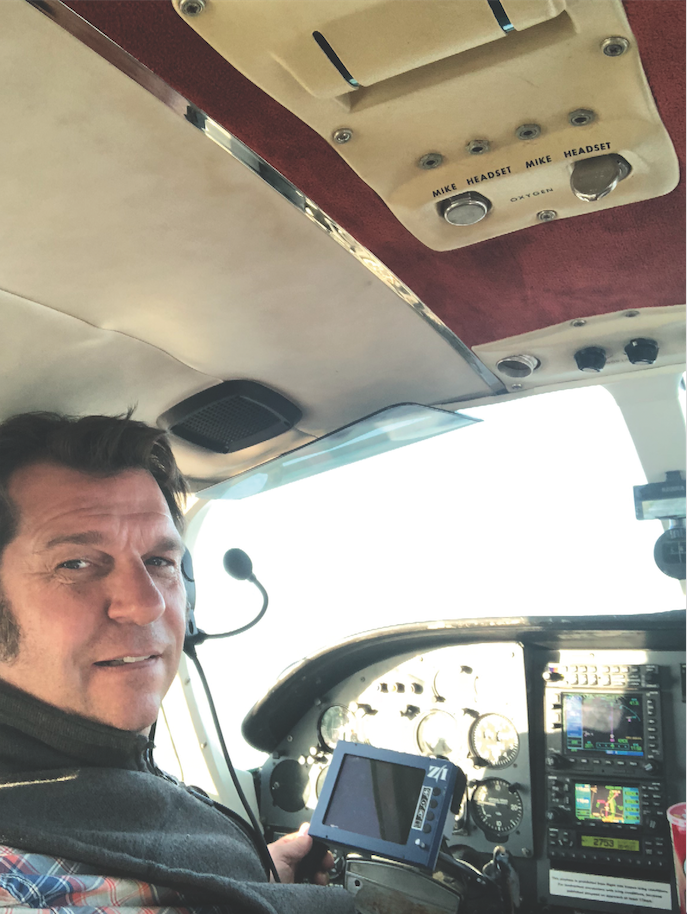 Pilot Mark Schubert at the controls.

ASI’s first customers, mostly small mapping companies, wanted diapositives and prints made from film to use in their plotters to generate contour maps.

About two years after co-founding ASI, Macke shut down American Reprographics and merged it with his new company, where he took charge of the production of photo products, scanning imagery, and enlargements.

Then Merrick arrived on the scene and introduced airborne differential GPS. “That was the first time we got into GPS,” Schubert recalls. “We were still doing everything without a navigation system, just flying out the window and using 7 1/2 minute quads, but with the airborne GPS we were getting exposure centers, which was helping with their AT process.”

A few years later, ASI acquired Track’Air (now Lead’Air) navigation systems and added them to both of the two film cameras it had. 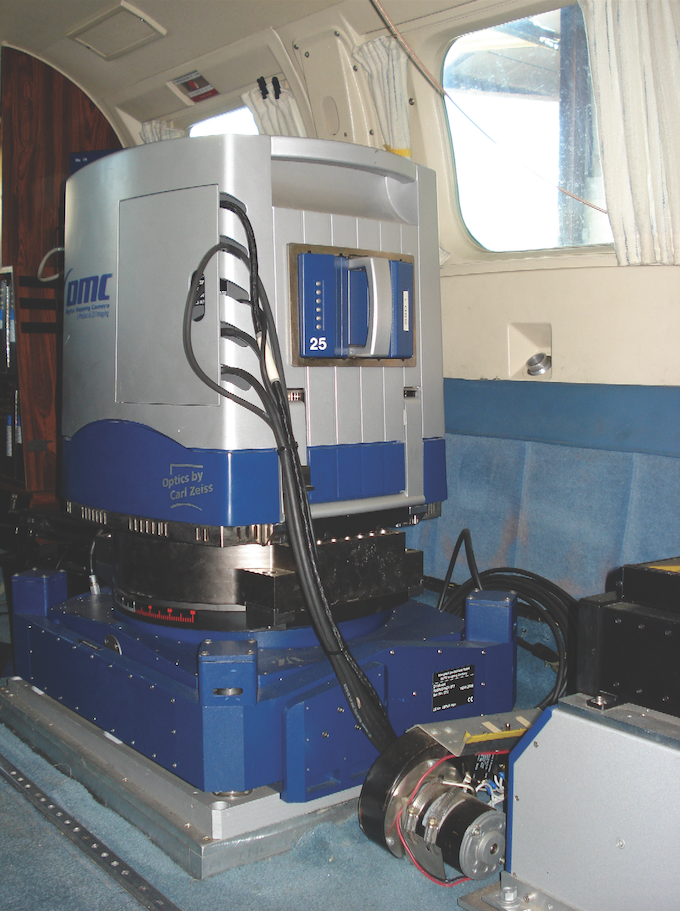 In 2007, ASI purchased its first DMC, from Intergraph. “I was also looking at the Vexcel camera for a long time and I knew that they would be a strong contender,” says Schubert. “Surdex, PhotoScience, MJ Harden, and Aerometric already had cameras. They were all my customers.”

Finally, Mike Ritchie from PhotoScience convinced him to base his choice on what his customers were using so that he would be able to provide them with additional capacity when they needed it. 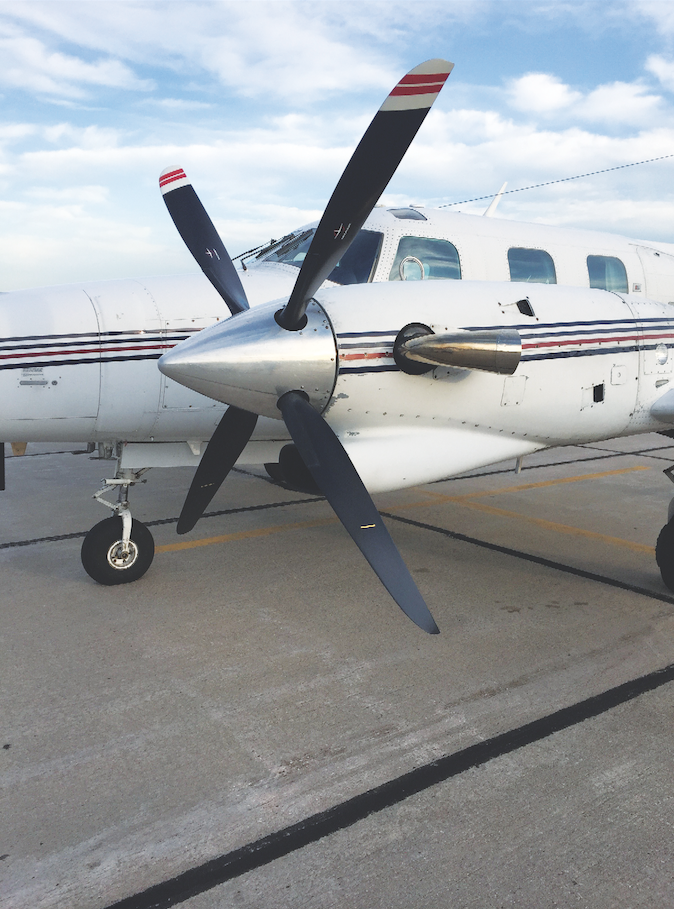 In September 2013, Aero-Metric agreed to acquire Photo Science and Watershed Sciences to form Quantum Spatial, which billed itself as the largest provider of location-based tools, analytics, and data in North America.

This was “the event that affected us the most,” Schubert explains, “because the medium-sized firms that they purchased were all my solid customers. When they combined into one company, it got very tight for all of us flyers.”

While those companies were independent, none of them had enough cameras for their largest contracts, so they turned to aerial mapping companies such as Keystone, Richard Crouse, and ASI to bring in extra capacity. When they all became part of a single company, however, all the sub-contractors suffered greatly.

Lidar and Phase ONE Cameras

What helped ASI weather this big change in the industry was its purchase of its first lidar device in 2012, prior to the founding of Quantum Spatial.

“It held us up above water during that huge transition,” says Schubert. “We were working with lidar for PhotoScience and AeroMetric.”

Nevertheless, he points out, Quantum is still one of ASI’s biggest customers, because the smaller company helps the larger one fulfil its requirements in federal contracts to subcontract a share of its work to small businesses. “They have been very good about it,” he says.

While ASI’s lidar work is holding steady, Schubert says, in the last couple of years the company has begun to use Phase One cameras, which cost only a quarter as much as the big mapping cameras, to give its customers a cheaper option.

“We’re putting a system together right now with a Phase One camera and an Applanix IMU on a SOMAG camera mount with a Lead’Air system. We are just about ready to offer Phase One imagery in a photogrammetry-style product.”

ASI’s current mapping customers seem to still be happy with film, Schubert says. “We scan it and make a digital product that goes into their softcopy.” However, he still loves his big cameras. “There’s nothing better than having those big cameras for the large, state- and county-wide collects. My big cameras and the lidars are really the money-makers.”

The explosion in the number of UAVs and the attention being given to them has cost ASI some of its smaller projects, such as 1sq mi projects or quarter sections.

“As soon as one engineering company buys a UAV, their competitor finds out and buys one, too,” says Schubert. “We are finding that many of these engineering companies have six or seven of them and they are not using any of them, from time to time, either.”

After “a huge push to use UAVs,” he explains, many companies are now realizing that, for large areas, it’s cheaper to fly with the big film cameras and take the photogrammetry approach with three images instead of a thousand from a UAV.

Cube sats, on the other hand, have not cut into ASI’s business at all. Besides the high cost of their imagery, Schubert says, they are also very weather-dependent and may not be able to capture imagery within the sun angle and date range required by a customer.

In the last couple of years, there have been “some amazing improvements” in lidar, Schubert says, especially with regards to the range gate issues that the previous generation of multi-pulse sensors had.

“Before, we had to fly at a minimal elevation and try our hardest with terrain following, just to avoid getting into these range gates. They have managed to eliminate them and we have been able to fly over mountains that we have never been able to fly over before without having many, many issues. A project that should take 40 flight lines could take 100 or 150 flight lines if you have to deal with range gates.”

In April 2014, Schubert bought Macke’s share of the company and the latter is now happily retired in Florida. 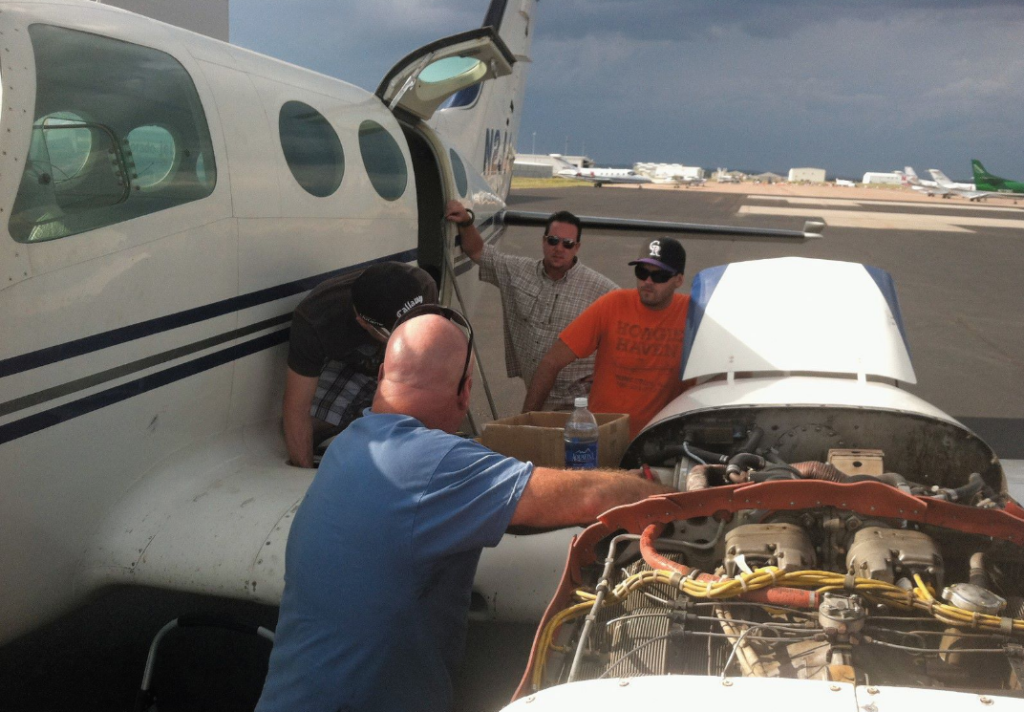 An ASI team member performs maintenance on one of its aircraft.