Aerial lidar’s growth has created challenges for small business in the aerial-data collection data; here’s how one company turned them into opportunities.

For several decades (1950s -1980s), the commercial mapping industry operated in a relatively stable technology environment. While numerous and important technological advances were made (most notably the introduction of digital analytical stereo plotters in the 1970s), the basic principles and production methodologies of photogrammetric mapping remained the same:

based on a zoom factor of 10x,

Since the introduction of disruptive technologies such as light detection and ranging technology (lidar) in the late 1990s, the industry has faced numerous challenges directly relating to the costs of obtaining aerial lidar sensors and their utility and profitability in an ever-increasing market, as well as better technology being introduced.

One of the chief goals of lidar technology as it has traditionally been employed within the photogrammetric mapping industry, the market that many small aerial data providers serve, has been to generate inexpensive digital elevation models (DEMs) for use in creating digital orthophotos.

Production of digital orthophotos via lidar in large areas such as county-wide mapping has generally been successful, and customers have expressed satisfaction with the results (appearance and utility of the data and price). Lidar has also been successfully employed in generating digital terrain models (DTMs) and subsequent contour mapping.

According to The National NOAA 2005-2015 Remote Sensing Study, Analysis of the Aerial Industry (from Global Market Insights, Inc.), government agencies tended to be early adopters of technology and thus, until recently, have had the lion’s share of the lidar data market, second only to digital orthophotos in importance and usage by government entities.

Consequently, lidar-derived data products have tended to reflect the needs and requirements of those government entities that purchase the data.

In order to meet mostly government requirements, aerial companies must spend enormous amounts of time and resources ($1 million – $1.5 million or more) in developing, purchasing, or hiring the following:

Thus, a major barrier to entry in the past has been the sheer cost of the system and subsequent additional supporting hardware, software, and personnel.

This—coupled with the fact that government lidar work, especially at the federal level, has been subject to delays and/or cancellations and that government entities tend to have payment cycles of greater than 90 days—has proven challenging to small-business entry into the larger lidar collections and processing market.

The company was founded over 30 years ago with a single aircraft and an aerial film camera and has grown significantly through strategic investments in aircraft and digital aerial sensor technology. In fact, Midwest presently owns and operates five Zeiss/Leica DMC II digital aerial cameras. 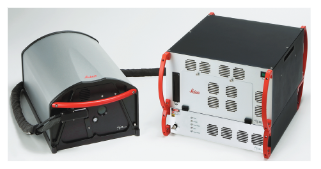 That system was a pre-owned Leica ALS-60 lidar unit, which the company used to learn about aerial lidar’s capabilities.

As a small business, Midwest was constrained by all of the aforementioned entry-to-market challenges. Thus, a decision was made to ease into the aerial lidar market. We purchased a pre-owned Leica ALS-60 lidar unit, and in order to keep additional costs down, we determined that Midwest would function in a “collection mode,” providing data collection and very limited processing services.

Thus, we were following a practice that had been successfully employed in digital aerial-imagery collection for generations of products.

At the time of purchase, the older ALS-60 had been eclipsed by more modern sensors. However, we determined that the accuracies and pulse rates were still viable for providing existing customers and partners with data over smaller areas (acres) to moderately sized areas (10s of square miles) of interest.

As anticipated, we learned over time that this unit was not-cost competitive for large-area collects (100s of square miles) or for high points-per-square-meter collects (12 PPSM>) along corridors when competing against newer lidar units. Newer units could fly higher and cover more ground at a higher point density and could provide for a higher point density with a single pass along corridors. 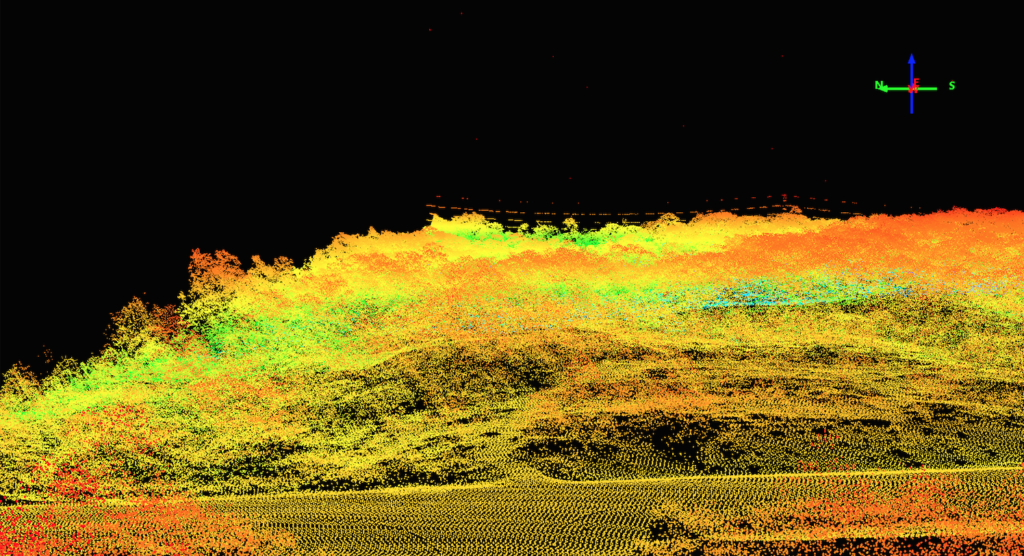 This lidar point cloud is of a cross-country electrical transmission line (at the top of the point cloud) captured with Midwest Aerial’s initial purchase, an older lidar system.

Note in the image above the cross-country electrical transmission line in the upper center of the point cloud. The older ALS-60 unit could not collect enough points, even with two passes at high overlap, to provide an effective depiction of the towers and lines nor to provide for the high point density and multiple returns for accurate vegetation penetration required of the surrounding areas.

Lidar projects we undertook between when we purchased the unit and the end of FY 2018 averaged between 5.0% – 7.7% of total gross yearly revenues (digital, film, and lidar), with lidar being the smallest contributor to revenue of the three. 2018 proved to be the greatest yearly revenue for lidar projects, both in dollar amount and percentage.

As a small business, Midwest does not have the financial resources of larger companies, and thus deciding to spend more than $1 million for a new lidar system requires that enough work be available in order for the system to be paid for in a fairly rapid timeframe. Midwest determined that a period of approximately 18 months was an appropriate amount of time for cost recovery for an aerial lidar system.

Thus, we needed to seek an “anchor tenant,” a company that not only could and would provide a significant amount of lidar work for the payback period but would also require high point density and overlap that could only be provided by new systems.

Circumstance in late 2018 provided an opportunity for Midwest to obtain the anchor tenant. As a small business, Midwest frequently participates on teams, bringing with us the aerial data collections services piece of the project requirements. One of our business partners and team members, American Aerospace Technologies, Inc. (AATI) of Conshohocken, Pennsylvania, had a natural gas transmission customer that was interested in obtaining highly accurate, high points-per-square-meter aerial lidar data over large areas of their transmission system, located in the Marcellus Shale region of the U.S.

After success with an anchor tenant, Midwest Aerial was able to purchase a new Galaxy Prime sensor from Optech.

In order to ensure that customer specifications could be met, we undertook a pilot project. This encompassed approximately 70 linear miles of pipeline. Data would be collected with Midwest’s older sensor and a new lidar sensor (Optech Galaxy Prime) owned by one of Midwest’s teaming partners.

The Galaxy Prime sensor was Optech’s latest entry into the aerial lidar market place. It had impressive technical specifications, including,

The goal of the pilot project was to allow the customer to view the products generated by each sensor and to be made aware of efficiencies via a comparison of costs to collect similar data point totals. Thus, 10 miles of the approximately 70 miles of pipeline right of way (overlapping areas) were collected with both sensors, and comparison/competing products were generated from the data collected by each sensor.

In a head-to-head competition, the new sensor was the clear winner. In some parts of the comparative area, the older ALS-60 required nine flight lines to meet accuracy specifications, whereas the newer one required only three. Galaxy Prime’s generated products (point clouds and bare earth models) proved to be cleaner and of higher vertical and horizontal accuracies than those developed from the older ALS-60 data.

Once results from the pilot project were carefully vetted by the customer and it was proven that their requirements could be met, they requested a proposal to collect lidar data over several thousand linear miles of their system. As part of the agreement, they requested the use of an Optech Galaxy Prime sensor or equivalent.

Having gained the experience of the pilot project, Midwest and AATI were able to expand their team via hiring additional seasoned lidar-processing personnel and an additional team member. A winning proposal, with a total dollar value and potential for continuing work over several years, convinced Midwest to make the decision to acquire a new lidar system for ourselves.

Lidar has become an increasingly important technology in the Midwest portfolio, and as customers have become aware of Midwest’s capabilities, interest and opportunities for lidar work continue to grow across all phases of the photogrammetric mapping industry, including:

To summarize, several things needed to happen in order for our small business to invest in highly expensive, high potential-value technology of aerial lidar:

1)An initial willingness to purchase an older unit in order to learn what it takes to successfully work in aerial lidar.

4) Completing a pilot project using older and newer technology, and