A UAS firm tackles a topographic mission at 10,000 feet above sea level with their own system.

(Above: IST Aerial’s Bo LeRoy uses the firm’s DJI Inspire One to collect data for volumetric calculations for compost piles located on a landfill in Colorado.)

IST Aerial is a division of Integrated Science and Technology (IST), founded 25 years ago by Jim Reisinger. The company’s focus had been on the environmental engineering world, until Jim decided to create a drone program. That’s when he hired Bo LeRoy and me to help him build this new section of the company, IST Aerial. The aerial division has a more diverse client base with focuses on surveying, engineering, building inspection, and more.

Recently we had the opportunity to do an aerial mapping mission for the Summit Country, Colorado landfill high in the Rocky Mountains. The mission was to create a topographic map with one-foot contours of the entire 900-acre site, for volumetric calculations.

The site introduced serious challenges for us to overcome. It is 10,000 feet above sea level and has 2,000-foot changes in altitude, and we had 30 MPH winds during the mission. Our CR Mapper overcame the challenges.

This is a factor that’s often overlooked by drone pilots, but it has important effects that need to be taken into account. The air density at 10,000 feet is much lower than at sea level. This causes the aircraft’s ground speed to be higher, and the motor will become less effective, with a reduction in flight time and possible stalls during takeoff.

This is where aircraft selection is extremely important, and it’s a reason I designed my own aircraft. The plane needs a lot of power and needs to be stable at a slow speed to be able to be hand-launched at these extreme altitudes.

2000-foot altitude changes during flight can create many problems, and the most important is the data. While changing altitude, it’s important to maintain a common ground sampling distance (GSD) as this is a key factor in accuracy. Many systems require you to fly at a common altitude during the flight, which will cause the GSD to vary, thus causing changes in accuracy throughout the map.

To overcome this, a system must follow the terrain and ensure that the GSD is an order of magnitude smaller than required to meet the ASPRS standards.

The more obvious challenge is the lower battery life due to climbing. Add this to the lower flight times with a higher altitude, and it becomes very difficult to cover large areas. I designed the CR Mapper to be capable of long flight times and to be very efficient while climbing. With that I saw only a 20% reduction in flight time while flying these extreme altitude changes.

The CR Mapper fixed-wing UAS after one of the landfill flights.

30-mph winds cause a lot of turbulence, which results in blurry images. Often, these are not caught until after the mission, and they can introduce significant errors into the final product. So, it is extremely important to have a system that mitigates the risk of image blur.

Our traditional fuselage and wing design creates a more stable flight as less bank is required to get back on path. Our system also has generously sized control surfaces, which allow the plane to correct before the turbulence causes an issue.

The plane carries a Sony A6000 optimized for a fast shutter speed, which can handle significant movement before blurring. With this sensor a trained eye cannot tell the difference between a photo taken in 30 mph winds verses on a calm day. 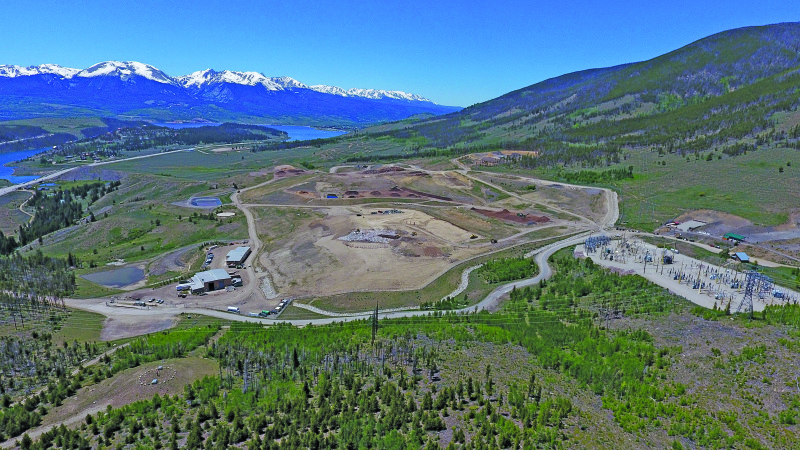 An oblique image of the landfill, taken with a DJI multirotor used to make large prints for the Summit County office

The landing is unique: the UAS comes in close to a 45-degree angle and very slowly. This eliminates the need for extra sensors for landing and lets you accurately land in a very small field surrounded by trees,

Flying in high wind will also cause significant reductions in the area you can cover. When flying crosswind, you can expect to see a reduction in flight speed that’s equal to one-half of the wind speed. For example, in a 30-mph wind you would see your ground speed reduced by 15 mph.

The CR Mapper has a wide speed range and is efficient throughout these speeds. We were able to increase the flight speeds going upwind and decrease the speed going downwind. This created reliable and accurate data throughout the entire mission.

Any one of these factors could have made this mission impossible, but we prepared and planned and had 100% mission success. The final deliverable was perfect, all within 8cm absolute accuracy.

During the post-mission analysis, the team found very interesting data points. The site had previously been flown by a manned aircraft with a one-foot GSD. In areas of vegetation, the analysis showed that the data from the drone was up to two feet more accurate. The one-foot GSD of the manned aircraft was from collecting data only on the top of the grass, whereas the drone data, with a 2-3 cm GSD, was due to it reaching the ground past the vegetation.