Think UAS platform selection is cut and dried? Well, did you know that fixed-wing UAS, not multirotor, are the best fit for a specific (and growing) inspections market? Or that by choosing an amped-up multirotor UAS, your fee schedule could also get amped-up?

Now that FAA Rule 107 is the law of the land, many geospatial-related firms have either taken the plunge on UAS technology or increased their research and evaluation efforts to determine whether, and how, they might enter this space. To be sure, training, maintenance, insurance, legal assistance, etc. will all be part of the budget. However, purchasing or leasing a small UAS will, undoubtedly, make up the largest part of this overall capital investment.

Small UAS platforms can be categorized as three basic groups: fixed-wing, multirotor, and an emerging class that’s a hybrid fixed-wing/multirotor craft that can take off and land vertically and fly at high speeds horizontally.

Picking a platform doesn’t happen in a vacuum. You should first consider your current and near-term opportunities and decide which platform suits your firm’s operation. From a business perspective you should also look to see what opportunities your choice of platform could offer down the road. For example, a fixed-wing craft would be a good selection for larger mapping and surveying projects, but it also might leverage you into the growing precision-agriculture space.

That said, forward-thinking entities will also want to look beyond “here-and-now” applications to ask “what services could we offer in the future that would allow our firm to grow?” This often leads firms to acquire multiple UAS platforms to maximize the many opportunities provided by this technology. 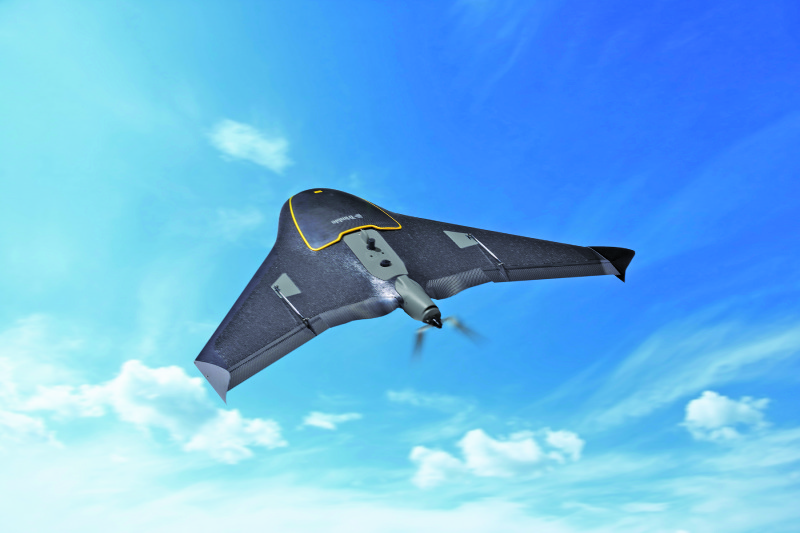 Trimble’s UX5 is an example of a delta-wing UAS, efficient for typical mapping missions.

For the longer flights required for typical aerial mapping missions, fixed-wing craft are more efficient. Their wings do the work of keeping the craft aloft, thanks to the Bernoulli principle, cutting down on the need for massive propulsive thrust (like multirotors) to provide aerodynamic lift. This translates into longer flight times, more mapping coverage per mission, and enhanced operational efficiency.

Speaking of wings, fixed-wing craft can be further broken down into two different categories according to their wing configurations: conventional and delta-wing/flying-wing. An example of the former is Altavian’s NOVA F7200. With its high-aspect nine-foot (!) wingspan, it can perform missions for up to 90 minutes, far exceeding the flight time of a typical multirotor UAS. Examples of delta-wing/flying-wing UAS include the senseFly eBee and the Trimble UX5. A former military, now civilian, commercial UAS designer once told me that the conventional, high-aspect wing configuration is simply the most efficient airframe.

The delta-wing/flying-wing configuration, on the other hand, is much smaller (the UX5’s wingspan is just over three feet) and perhaps has the edge in terms of agility and portability. Flight agility comes in handy in small-area projects where tight turnarounds on data collections enhance overall mission efficiency. Portability, on the other hand, has logistical, tactical, and operational advantages, especially while working on projects in remote areas. Need more convincing? Here’s where they excel.

The downside of fixed-wing UAS is their inability to hover for close-in work, a useful ability for inspection applications. (Check out the aside, “Multirotors’ Secret Weapon“.)

While fixed-wing UAS have the advantage of longer flights and are better suited to large-area mapping missions, multirotor craft have capabilities that make them well suited for smaller-area missions.

A great example is inspections. The ability of multirotor UAS to hover in one place, coupled with their agility and slow-speed capabilities, make them ideal for close-in inspection tasks. senseFly’s albris is a good example of a multirotor designed especially for inspection tasks.

The ability to go low and slow and to stop and stare has benefits for other applications, as well.

While fixed-wing craft are routinely used for stockpile surveying, multirotors seem to rule this market. They have an advantage in collecting oblique images: useful for not only stockpile surveying but also anywhere 3D imagery is required.

I’m seeing multirotors being put to good use in construction surveying, from design, to monitoring work progress and volumetric measuring of excavation work, to even BIM applications. Stepping outside purely geospatial applications, multirotors are used extensively for aerial photography (just in case you wanted to expand your business outside the geo-box).

Operationally, multirotors can be applied to restricted-area missions. Thanks to their VTOL ability, they do not need runways for take off and landing, and for those tight inspection and construction applications they can operate in constrained areas, even inside structures.

Many observers also note that multirotors are easier for beginners to fly compared to their fixed-wing counterparts. Given the large number of UAS novices entering the market, this alone is a significant factor in platform selection.

Those are, in a nutshell, the pros of the multirotor UAS platform. (Spoiler alert!)

As noted earlier, for larger area projects, fixed-wing craft have the advantage. Let’s look at the details on why this is.

Couple this with multirotors’ much slower speed, and coverage areas are further downsized. Using the Altavian example again, the average coverage area is 3,000 acres for its Nova versus only 55 acres for its Galaxy. (Note: although an apples-to-apples comparison between different platforms is impossible, Altavian has priced these two units almost identically, so it seems like a fair appraisal.)

Also from an operational aspect, multirotors just don’t do as well in higher-wind conditions; fixed-wing UAS are the go-to solution for operations in these conditions. 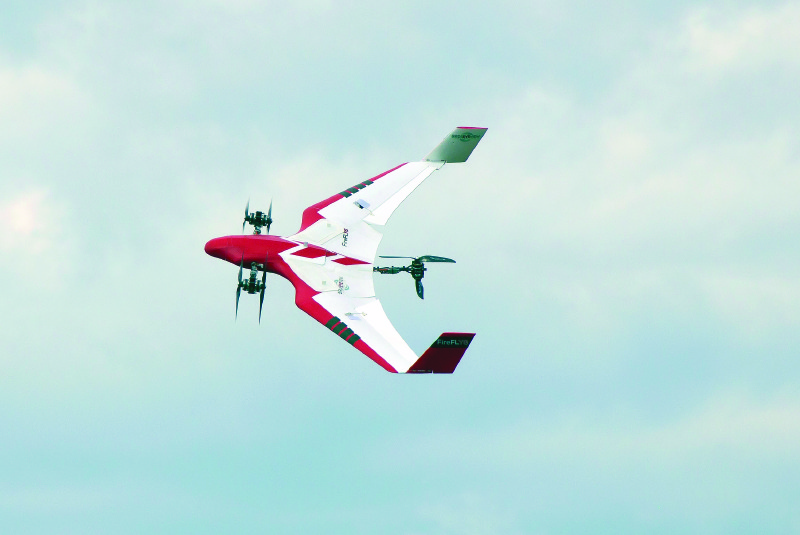 Wouldn’t it be cool if there were a UAS that combined the advantages of both fixed-wing and multirotor UAS? A craft that could take off and land vertically and hover like a multirotor, yet fly fast horizontally and cover lots of turf like a fixed wing? While hybrid UAS have been in development for a few years, the units I’m familiar with are not designed specifically with geospatial data-collection in mind.

This has changed with the advent of a new hybrid UAS: the BirdsEyeView Aerobotics’ FireFLY6 PRO. (The firm also offers the FireFLY DIY version that, as the name suggests, is a build-it-yourself option. I’m focusing on the PRO ready-to-fly version here.)

The FireFLY is a combination Y6-configuration hexacopter and fixed-wing “aerobot” that offers the best of both fixed-wing and multirotor UAS. It takes off like a conventional multirotor and then transitions to horizontal flight by pivoting the front four rotors 90 degrees and allowing its fixed wing to come into play. Although the average flight time is on par with an average multirotor (40+ minutes), the FireFly flies much faster than a typical multirotor, which translates into greatly increased coverage: the firm claims that its FireFLY Pro can cover 450 acres in a single mission.

Where the FireFLY differs from other hybrid sUAS currently on the market is in the realm of data collection. The FireFLY features five plug-n-play sensor payloads, ranging from conventional cameras to multispectral sensors to thermal imaging. With this range of sensors, users can tackle missions from conventional mapping to precision agriculture to inspection simply by swapping out sensors.

Flight control/mission planning is accomplished through the firm’s Advanced VTOL Autonomy (AvA) firmware that enables fully-autonomous operations. All flight behavior (including transitions) can be pre-planned using map-based point-and-click commands in the FireFLY6 planner. Post-processing of FireFLY geo-referenced imagery is agnostic, so any third-party software can be used. The company does offer Agisoft PhotoScan Professional Edition as an add-on.

Aim for an option that has geospatial data collection “baked in” from a provider who knows the profession.

Keeping in mind the exceptions detailed in this article, if your firm focuses wholly on larger mapping and surveying missions, conventional fixed-wing sUAS are a better fit. Likewise, if all the projects you take on involve small-area missions, like inspection, then a conventional multirotor is probably your best bet. Suppose, however, you’re looking at applications in both market spaces? Buying both a fixed-wing and a multirotor sUAS is a path that more and more UAS operators are choosing. Acquiring both platforms allows firms to expand into multiple markets, maximizing their ROI and profitability.

However, investing in multiple platforms along with their attendant sensors, spare parts, training, etc., can be a hardship, especially for small- to medium-sized firms. This, then, is perhaps a niche a hybrid fixed-wing/multirotor can fill: a multi-mission capable craft that could expand economic opportunities without the hefty capital investment of multiple platforms. It’s a third option that may be on the horizon.

Now that you have a better understanding as to what platform is best for which application, your next task is choosing from the myriad of sUAS offerings on the market. The good news is that you have plenty of professional-grade options to choose from. While we don’t make product-specific recommendations, it does help to keep in mind that phrase, “professional-grade.” Aim for an option that has geospatial data collection “baked in” from a provider who knows the profession. To maximize your profitability and ROI, you need a proven, reliable, safe, easy-to-operate sUAS that can consistently gather accurate data.