Ground control points for aerial, satellite, and UAS imaging and remote sensing projects, large and small, can be downloaded on-demand—what a service!

We look at an example service, and link to an upcoming webinar of the subject.

With cameras pointed at Earth from hundreds of cubesats and tens of thousands of UAVs, in addition to legacy Earth observation satellites and manned aircraft, we are awash in images that can be used for mapping. Without accurate ground truth, however, the maps produced from those images are not sufficiently accurate for most professional and many commercial purposes. Ground truth means that the imaging data is tied to specific, human-verified locations on Earth (georeferenced). Ground truth is established using Ground Control Points (GCPs).

No Aerial Truth Without the Ground Truth

Without good ground control, accuracies for non-orthorectified satellite images are typically off by 10m to 200m. Likewise, aerial imagery is off by meters, and models from UAV flights are equally off and distorted. Using GCPs, remotely sensed imagery and lidar data can be georeferenced with centimeter-level accuracy.

GCPs are the foundation of accuracy for many geospatial tasks, including:

While the barriers to entry into aerial photogrammetry may appear to be dropping due to the falling prices of aerial platforms and cameras and the ease of use of photogrammetric software, what has not changed is the skill, experience, and effort it takes to collect accurate GCPs. Naturally, non-metric cameras need the ground truth GCPs, but so do high end metric cameras. 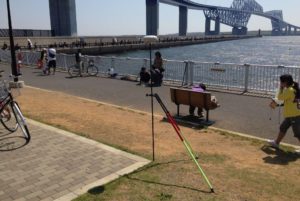 With as much aerial mapping going on as there is, and has been for many years, it would be safe to assume that a corresponding body of GCPs have been established by various entities—and hopefully with proper procedures. If there is full and reliable metadata—position, reference framework, stated accuracy, etc.—wouldn’t such collections of GCPs be a potential resource, much in the same manner as aerial imagery already is?

Imagining as a service (IaaS) is already a marketing model for aerial service providers, as with data products derived from satellite images, InSAR, and lidar. Online multiple service providers offer data coverages of varied resolution for nearly any corner of the globe. What about GCPs? How viable could GCP as a Service (GCPaaS) be? [Ed. I think we just coined a new term!] To answer this question, we sought out a firm that has been doing this for many years.

CompassData has been surveying for 26 years and its archive now has more than 60,000 GCPs in more than 100 countries, including GCPs for more than 1,000 airports. “Our archive and new collect services are helping many of the main players in the remote sensing community produce and QA data products,” said Brant Howard, the company’s founder and director.

“CompassData has extensive expertise in complex geospatial projects where accuracy is of the utmost importance to achieve quality 3D products,” said Howard. “This includes ground support in coordination with aerial acquisition and the ability to reach remote survey locations in extreme terrain.” Often, the company’s survey team also unravels a confusing mix of legacy geodetic survey grids to establish a single permanent control network covering the project area. GCPs provide the geodetic accuracy to the resulting model and confirm the model scale.

Preferably, the company’s field crews intentionally delineate and set targets prior to starting data collection. Mostly, however, they choose photo-identifiable points, such as manhole covers or concrete corners, then observe and establish coordinate values with GNSS field surveys for these permanent features.

CompassData surveys for both domestic and international markets and has standardized delivery formats. The company has extensive experience in surveying for imagery collected by satellites, UAVs, and terrestrial mobile mapping platforms, whether with frame or push-broom cameras and whether nadir or oblique. It also surveys for any kind of lidar dataset and for completed models. Its consulting services help new customers find their best solution. The company plans each GCP survey to capture the best suited feature types that are photo-identifiable with high contrast and permanent, flat features. It tailors the accuracy requirements of each collection to that which is requisite of the final product.

In addition, an archive of GCPs is of particular interest during the current pandemic, because of the limitations due to stay-safer-at-home orders and it can simply reduce the amount of time and costs that surveyors need to spend in the field. In addition to its archive, they also offer collect services for new GCPs: ISO-certified, standard delivery, and with various pricing models.

There is always a hesitation, within the surveying profession, when it comes to accepting data from other surveyors. Standard practice is to independently verify, re-observe, and retrace the steps of those who came before. When it comes to geodetic control though, the active and passive control from agencies charged with maintaining national/state/local reference frameworks are often held as fiduciary to project control and absolute accuracy. The same is true with GCPs. 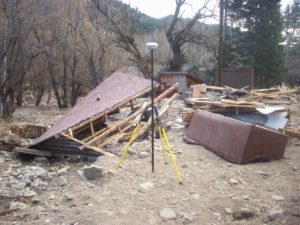 An exception to the practice of independent verification (for geodetic control and GCPs) happens when the receiver of the control data can be assured of the care and diligence undertaken in the establishment of the control, that conventions for accuracy standards were adhered to, and that there is good documentation.

According to the American Society for Photogrammetry and Remote Sensing’s positional accuracy standards for digital geospatial data (edition 1, version 1.0; November, 2014), “Ground control points used for aerial triangulation should have higher accuracy than the expected accuracy of [the] derived product.” Setting up each GCP is often a laborious and expensive proposition and even a relatively small aerial photogrammetry project can require dozens of them.

The GCPs in their archive, CompassData states, have all passed QC procedures and are categorized (simplified) in the following accuracy classes: 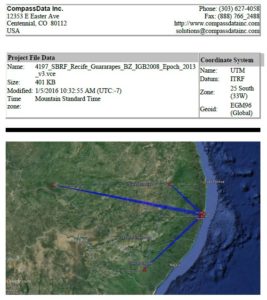 First page of a typical multi-page GCP report, this one for a point in Brazil

With operations in the both Americas, Europe, Asia, Africa, Australia and Oceania, coordinating the operations, and QA/QC steps can be a daunting proposition. Philipp Hummel, technical director, PLS, CFedS, CP at CompassData oversees this, and explained: “We have a quality team, field mangers, a processing team, and a checking team. To coordinate operations in so many states and regions of the world, the crews in the field often need quick answers on how to deal with unforeseeable situations that might pop up when they get to the field.” To accommodate efficiently, crews in different time zones, they have instituted a check-in team and smartphone apps that are available at any time.

Hummel spoke of a statewide GCP project they recently did covering the entire State of Texas, and noted that due to the vast expanse surveyed, it was important to get it right the first time, and provide immediate feedback, as it would require a lot of additional travelling to redo any points. He quipped “We discovered that Texas is really bigger than it is.”

Projects for customers might range from small sites to whole states and countries, and might be for aerial, satellite or UAS control, so the density of control can vary, as well as the requested accuracies.

Here’s how it works, for downstream GCP customers: You can submit a request online to download the entire GCP archive (with truncated data) and determine what points can meet your requirements. At that point, requests for individual or groups of GCPs can be made, and then the pricing can be determined. Pricing is a little complex, as Hummel notes, as the levels of resources required to establish different sets of points can vary a lot. But according to Compass, their customers ultimately find that it is acquiring GCPs from the archive is less expensive than sending other crews out to establish their own GCPs.

Each GCP in the CompassData archive includes a WGS84 coordinate file containing lat/long/elevation, HAE, and metadata, in comma-delimited format, shapefiles, and KMLs. Support for common standard coordinate systems and projections is available, but also for the more complex international ITRF formats with well-defined epochs to counter the constant tectonic velocities.

“We provide each of our GCPs to our customers with all supporting metadata, context photos, accuracy reports, and station diagrams,” Howard pointed out. “Designing your project area to coincide with archive GCPs increases the accuracy of your mapping products and save you time and money.”

Key customers include those operating cameras on airborne platforms and satellites. Compass provided some customer feedback, like Leica’s HxGN image service, and Airbus Defense and Space, that operates SPOT (1,5 m resolution) and Pléiades (0,5 m resolution) remote sensing satellites, optical satellites as well as TerraSAR-X and Tandem-X radar satellites. And localities like Natrona County Wyoming that used the GCPs to perform third party quality control on all deliverables from a high resolution orthoimagery and Lidar project performed by one of their vendors.

Something that prompted the writing of this post was some discussion in some surveying social media circles about the subject of GCPs as a service when a webinar on the subject was announced. It will be about the CompassData service and is set for June 23rd, 2020, 9:00am (Mountain Time). You can sign up here.

The practice of surveyors sharing GCP data is not entirely unique. The practice is done on various scales via agreements, contracts, and ad hoc purchases, or in some cases freely. For example, the USGS has a public data set of GCPs. Our example of CompassData’s archive though is a nationwide and global commercial service—we did not find others of this kind, or on this scale. While the diligent aerial mapping professional would need to also consider many aspects of existing control records—such as the currency of coordinates and changes thereof due to plate velocity in some regions of the country—the idea of observe-once-use-many-times has appeal. 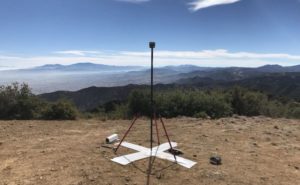