It was May of 1982, and we just finished the legal demarcation of the open pit mine when the rainy season began in the Am­­a­zon. It was time to go back to the city and plan our next move.

The requisites from the Ministry of Mines in Venezuela specify that, to turn a mining concession from exploration to exploitation, the owners and operators must present a legal survey with concrete monuments/bronze plaques on each corner and a contour line map of the property. We had the first but had not started the latter.

Normally we would wait for the dry season, then send a team of ground crews to establish the contour lines, but now we had a deadline to comply with, and it landed us in the middle of the monsoon. The legal demarcation had taken so long, due to the terrible conditions of the place, that we had run out of time to finish the job by traditional methods. We had only three months to finish or the owner would lose its exploration concession and the property would revert to the government.

It was time to be creative, and we turned to the air for our solution. At the time, there was German com­­pany in Venezuela creating profiles of dense forests in the northern part of the country, and we reached out to them for help.

Their solution was simple and elegant, but required flying at low altitude, which in the Amazon is never a good idea. A single-beam laser would be mounted on an aging 1967 Beechcraft Queen Air, a utilitarian twin-piston engine aircraft that could easily carry the four occupants and the heavy equipment needed for the project—but at a hefty cost in terms of fuel and climb efficiency.

The laser worked by constantly bouncing off the dense tree canopy, and from time to time, a beam would reach the ground and from that measurement we could get an idea of the tree height. There was also an eight-millimeter movie camera attached to one side of the laser. It took a still frame every half-second, so we had a graphic depiction of where the laser was hitting. 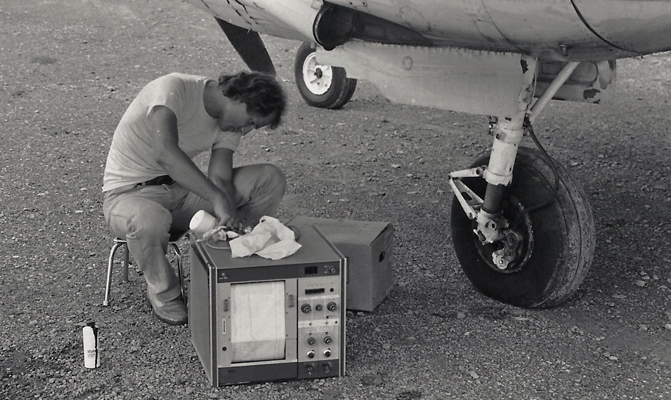 The representation of the profile was an actual printer on board that advanced as the laser took heights over the trees and eventually the ground. There was an almost continuous line that represented the treetops, but every few seconds, a beam would reach the bottom and the seismometer-like printing began to show the ground profile.

It was particularly important that we annotated on the printer paper the line we were flying, and then wrote the photograph number that corresponded to the line being flown. It was a tedious process but without these notes it was impossible to reconstruct the flight path and hence the profile.

Back then, the laser was so weak that there could be nothing between the signal and the target, and therefore the aircraft had a substantial hole in the belly that allowed the beam to travel freely to the ground and the camera to take the photos. This resulted in an infernal noise inside the cabin and communications between the crew members was limited to using signs and hand gestures.

The idea was simple, fly a tight grid over the concession making sure that the distance between lines guarantees a good extrapolation of the contour lines.

By flying repeatedly over the Parupa River we helped refine our location since the laser signal bounced as a flat line over water, providing useful information as to our location.

View from 2,500 feet over the Caroni River in its narrowest section “La Estrechura.”

The mission started on a rainy day, and we could not do much more than bring the plane from the city of Caracas to the Canaima Airport at the edge of the Venezuelan Amazon basin.

Days later a window opened, and we flew the 100 miles southwest to the mine site. Even though, for this equipment, is not necessary to fly in perfect weather, as is the case with aerial photography, there can be no clouds or precipitation between the laser and the treetops. There was a high overcast at 25,000 feet but the ground was clear and the conditions good.

As soon as we arrived at the area, we descended to 2,500 feet over the ground and lined up with our first line. I activated the laser and the camera and wrote on the paper the necessary information that would allow me later to reconstruct our position with respect to the mine boundaries. 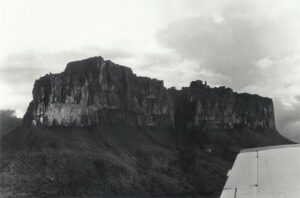 Auyantepui holds the record for highest waterfall in the world—Angel Falls—and in this picture shows how low the plane had to fly for the laser to collect the needed data.

We flew for about two hours and completed 60 percent of the lines. It was exhausting work under exceedingly difficult conditions and the weather was deteriorating rapidly, so we turned back and landed in the nick of time, a tropical deluge descended over the jungle drenching the runway and halting airport operations.

Two days later another window opened with a lower overcast at 15,000 feet but good visibility and clear view of the tree canopy. When we arrived at the mine site, we noticed that the laser return was extremely weak and almost not registering in the re­ceiver, so I asked the pilot to descend to 2,000 feet. At this lower altitude, the laser returned a stronger signal, so we could fly for an hour, completing another 20 percent of the job. But eventually the signal was weak again.

I had to decide, should we fly lower or return to Canaima to troubleshoot the equipment. I decided to return, having heard a lot of horror stories of aircraft crashes in the jungle, I did not want to risk flying an old plane at 1,500 feet.

As soon as we landed, we took the laser apart and determined that the diode was almost completely worn out, so it had to be replaced. There was a spare part, but in Caracas, not here in the jungle. So the pilot and mechanic took off to the city to replace the faulty part and the rest of the crew remained in Canaima going through our measured lines and developing the film of the movie camera to make sure the photos were useful.

A day later, the aircraft arrived with the new emitter. We installed it and then waited for another weather window. Two days later the opportunity came in the form of a gorgeous, cloudless sky. We took off immediately and flying at the safety of 3,000 feet we completed the mission in less than two hours.

We returned to the hotel, packed our bags and at the end of the day were landing back in Caracas. The next week was spent assembling the grid of small eight-millimeter photos and using the mosaic to link the profiles and the extrapolated ground. 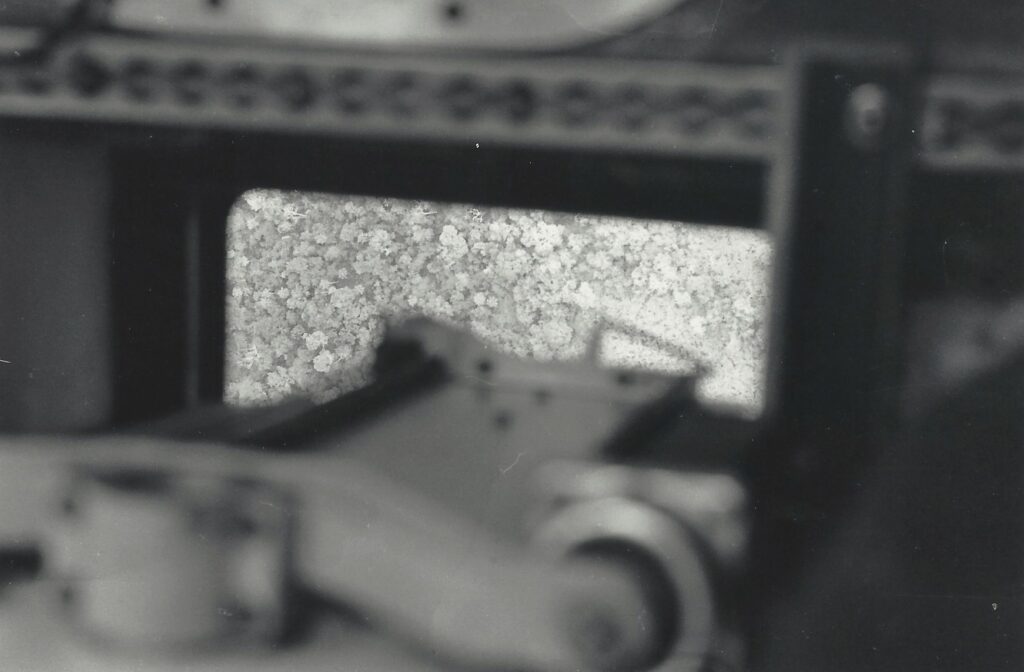 View of the jungle from inside the cabin at 2,000 feet through the hole in the belly of the aircraft.

At the end we presented two products, an orthophotomosaic at full color and a mylar product with the six concrete monuments, the boundaries, and the contour lines at ground level. We finished on time and the Ministry of Mines authorized the owners to go into exploitation mode.

With today’s technology, the 21,000 acres of the mining concession would be relatively easy to cover. With two GPS reference points on the ground, one on the camp site and one on the mine site, a small aircraft would be able to fly a lidar mission in a short period of time and generate a digital terrain model (DTM) that would comply with the requirements of the authorities.

But a laser and an old plane is all we had in 1982, and even though it was cumbersome and prone to errors, a single-beam laser, an eight-millimeter camera, and lots of notes on profile paper allowed us to reconstruct the reality of the ground under trees that were over 50 feet tall.

Doing the same job with ground crews in the thick tropical forest would have cost a fortune, taken months to complete, and wouldn’t have even been possible during the monsoon season. It was a good solution that satisfied the requirements of the authorities, and, looking back, it was a glimpse of what the future of the technology would bring.