While lidar has been a standard geospatial tool for many years, the requirements of companies using it have been rapidly changing and evolving. Therefore, lidar systems and sensors must be designed and adapted to meet these changing requirements.

RIEGL has 40 years of experience in the research, development, and production of laser scanners, rangefinders, and distance meters. We’ve been particularly focused on technology evolution regarding mobile laser-scanning systems, which we’ve designed to collect lidar point clouds from moving platforms with survey-grade accuracy.

Mobile lidar scanning is commonly used for such projects as identifying and mapping cracks in road surfaces, inventorying street signs, and gathering bridge clearances for truck-routing purposes. It greatly reduces the time, cost, and safety hazard of collecting this kind of data on busy roads while also reducing the impact on traffic. 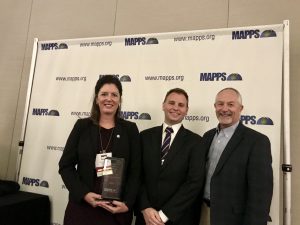 RIEGL’s VMX-2HA lidar sensor is an example of the evolution of mobile lidar. It’s our extension of our VMX line that has been out in the marketplace since 2009 and working hard in North America since 2010.

The system comprises two RIEGL VUX-1HA lidar sensors and an INS/GNSS unit, housed in an aerodynamically shaped protective cover, which provides an accurate and long-term stable system calibration. The alignment and placement of the two scanners keeps within the VMX tradition with a simultaneous forward/backward look to reduce shadows within the scan.

One of the benefits to our users of this extension of the VMX line is our attention to the camera platform. We’ve increased our ability to log data at a very high rate, up to 24 frames per second for our 5MP cameras, which allows you to have very high detail information capture, particularly at pavement level.

The system, providing interface and synchronization for up to nine external devices, allows for a flexible combination of different camera configurations, such as 5MP, 9MP, and 12MP RIEGL cameras, FLIR Ladybug 5+, and DSLR cameras such as Nikon D810 or Sony Alpha. The modular setup of the system allows the camera configuration to be changed or upgraded at any time. Multiple cameras can be used to fully capture the surroundings.

The new Ladybug 5+ panorama camera integration improves time stamping and enables integrated camera operation within the RIEGL system operating software. The provided camera ports enable flexibility to select the optimal position and orientation of the cameras to meet specific project requirements. Each single camera can be mounted and dismounted with accurate reproducibility of its position and orientation.

The six side-facing cameras are optimized for capturing traffic signs, overhead structures, building structures, and facades while the rear port is optimized to carry a close-to-nadir downward-looking camera that offers detailed capture of the road surface, reliable data for pavement analysis and crack indexing, and very little distortion of the projected image on the road surface. 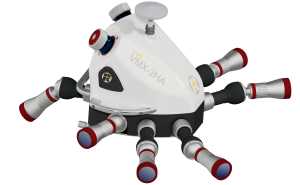 The VMX has always been known for the dual scanners, but in particular the 1HA sensor, with its 1.1 million shots per second and 250 lines per second per scanner, gives an effective measurement rate of 500 lines per second and 2.2 million pulses per second. This enables high-end data capture at very high speeds, allowing users to get data that takes other systems multiple passes in just a single pass.

RIEGL also redesigned the interface between the VMX-MH (measuring head) with scanners and cameras and the VMX-CU (control unit). The latter, equipped with a third-generation Intel Core i7 processor, controls management of power, data acquisition, and operation of the laser scanners, INS/GNSS sensors, and the optional cameras.

A 10 GigE network and a set of SSD storage media with 6TB disk space enables big data handling for uninterrupted data recording of comprehensive missions and allows for the smooth acquisition of the data and camera imagery.

A touchscreen and the RIEGL data-acquisition software facilitate the operator’s task in the field by providing real-time visualization of acquired scan data and imagery, while the software suite provides the workflow for mobile data acquisition, processing, and adjustment.

The RIEGL software package offers several data-processing features, including alignment algorithms to merge multiple passes from mobile scan data. It also enables scan data to be fitted to specific control objects, which results in a consistent point cloud of greater precision and geo-referenced accuracy. Finally, the geo-referenced scan data and images can be exported to well-known file formats or interfaced directly with third-party software.

The device is ideally suited for complex infrastructure collects, particularly along railways that have very short windows of acquisition, as well as for other infrastructure and design projects. Users can capture the data once and then update and register the point cloud later, in the post-processing phase, using commonly found features on the ground such as line striping.

From start to finish, the VMX-2HA provides users a next-generation experience, from the look and feel of the system all the way to the interactive user interface reflecting data and processing.

My favorite project currently is one that was done in the rail line in New York City, as well as several subway collections that have been done by our VMX users, both in New York City and in Washington, D.C. These VMX users have been able to collect amazing data for very interesting projects.