UAVs, pilots, and startups in Germany are a perfect fit in the sharing economy.

Today’s professional UAV pilots have found a niche in the construction and insurance industries for tasks that involve inspections, measurements, and image capture. At the same time, startup companies are taking advantage of the booming sharing economy to link professional drone pilots to firms that need them. I talked to several German startups to gauge how they’re benefitting from this innovative and disruptive business model.

How It’s Done in Germany

When Christian Wetzel, CEO of VOXELGRID from Munich, Germany, needed drones to complete a client’s project requirements, he looked into the possibility of renting them instead of purchasing.

“Our startup company focuses on the automatic creation of affordable 2D floor plans. We can offer competitive prices to our clients because we have patented our own imaging applications. Renting drones will further reduce our costs, so we looked for companies who could provide this service to us,” Wetzel said.

Wetzel got in touch with another Munich-based startup called FairFleet, the drone-services provider that has been called the Uber of the commercial drone business in Germany. “FairFleet offered us drone flights at a really attractive price,” he said. “We discussed with them the specifics of our projects as well as the results that we required, and they delivered on time. Perfect cooperation.” 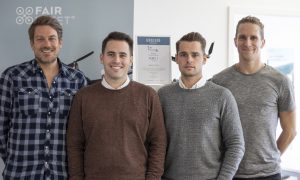 It is this cooperation model on which drone service companies like FairFleet thrive. I met Alex Engelfried, one of the four founders of FairFleet, at the INTERGEO event in Frankfurt, the biggest geospatial trade fair in the world. Engelfried explained to me their business model.

“We are drone pilots ourselves. We started our startup company by connecting clients with specific UAV needs to a group of professional drone pilots,” he said. “Our company’s first goal was to establish a platform that guarantees fair treatment and pricing for both the clients and the drone pilots.”

FairFleet has been winning awards ever since it launched its beta version at the Techcrunch in London in 2015. Their full-service platform was up and running a year later with help from the investment firm Allianz X, the venture unit of the insurance company Allianz Group. During last year’s INTERGEO event, FairFleet won the best UAV startup company award. 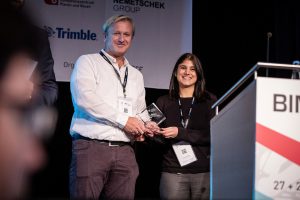 “When we first started, we found out that the drone-service market was very undeveloped with no standardized products and services. There were not even fixed and transparent prices,” said Engelfried. Now FairFleet offers professional UAV pilots, plans flights, and does the post-processing of the data to deliver results to the clients.

The business model of the shared economy is built on the concept of sharing resources. When car owners share their vehicles, as in the case of Uber, or homeowners rent their extra bedrooms, as in the case of AirBnB, paying customers can access goods or services when they need them. Similarly, professional-grade drones, which are often expensive for most small companies, can be rented from drone pilots who can then take advantage of earning income from flying their drones.

The disruption brought about by the sharing economy has a tremendous impact on traditional business and their business models. Companies Similar to FairFleet that use this collaborative business model include SkyCatch and DroneBase in the U.S. and BIRDI in Australia.

In the UK, the growing utility of drones in both business and public services will deliver significant benefits for the country’s economy. According to a 2018 PwC report on the economic impact of drones, 76,000 drones are projected to fly by 2030, creating 628,000 new jobs and an estimated £42bn increase in UK gross domestic product.

In the U.S., the number of UAVs for commercial use was estimated at 2.8 million in 2018, according to the consulting company Gartner. Global projections published in a Goldman Sachs report indicate that, between 2016 and 2020, commercial drone use in the construction industry would be valued at $11.2bn, with both the insurance ($1.4bn) and infrastructure inspection ($1.1bn) services not far behind.

Drone makers are profiting from this growing trend. In 2015, drone companies received $479 million in venture capital, according to estimates by CB Insights. DJI, a Chinese drone maker valued at $8bn, is the global market leader with 70% of the consumer-drone market. The company announced in 2018 that their largest-ever order to deliver 1,000 industrial drones to SkyCatch will be used to monitor the projects of Komatsu Smart Construction in Japan. (Look for more on SkyCatch in a later issue.)

Yet, the expansion of drones in the construction and other industries will largely rely on the success of this collaborative peer-to-peer economy.

Getting innovative drone startup services off the ground will rely on regulations spearheaded by national aviation bodies. Drone-flight regulation, both in the U.S. and Europe, is based on promoting public safety, especially when flying drones near airports and military installations. Regulations promoting the growth of the drone-service business still need to be fine-tuned.

Australia, for example, prides itself as the first country in the world to allow the application of commercial drones under the country’s civil aviation system in 2002, according to the Economist Intelligence Unit. The country’s agriculture and mining sectors have since benefited from developments in drone technology.

New rules in the UK introduced last year now require the registration of drones heavier than 250 grams (about .5 lb) and restricting flight height to 120 meters (400 feet) to improve aviation safety. In the U.S., the Federal Aviation Administration (FAA) allowed commercial drone use in 2016 as long as pilots are at least 16 years old and pass a written test. The license to fly drones costs $150 and must be renewed every two years.

The FAA Part 107 certification that allows only certified drone pilots to operate commercially has since become a model for other countries, letting pilots fly drones only in broad daylight, within view of the operator, and without flying over people in a non-restricted airspace.

Regulations in France and Germany are loosely patterned after the U.S. and the UK, with exceptions on the weight of the drone. UAV pilots who work with FairFleet in Munich, for example, must take courses and pass an exam to fly drones that weigh over 2 kgs. Lighter drones require permission from each state’s aviation department.

FairFleet’s Engelfried adds that one of the main challenges of their business “is the changing and different regulations on drone flights all over the world.” FairFleet understands the complexity of drone regulation around the world because it operates in 47 countries.

The Importance of Pro Drone Pilots

Because government regulations allow only certified pilots to operate commercial drones, UAV service companies have to build a network of professional pilots if they want to provide drone services to various industries. DroneBase, a similar drone-service company in California, even provides additional online training for pilots who already have FAA Part 107 certification.

Mike Wunderlich is one of them. He is an IT specialist who works part-time as a professional drone pilot during his spare time. He learned to fly drones by attending courses and participating in MOOCs and got deeply interested in a geoinformatics course offered by the University of Salzburg.

“I became aware of using drones to create aerial photographs and 3D models by using photogrammetry. Then I bought my first drone to familiarize myself with the techniques of flying drones,” said Wunderlich.

By the end of 2017, he signed up with FairFleet and started to receive commissions to photograph real estate projects using his drones. “Looking back, I would say, this was one of the best decisions I have made!” Wunderlich said. “Through the FairFleet platform, I have received assignments which I would never have easily accessed as a freelance pilot.”

As with most freelance professionals, Wunderlich flies his own drones. FairFleet does have drones, but they use them for testing and training purposes.

“The communication with FairFleet is done predominantly via their pilot back-end app. With this tool, I can make an individual offer to a client, including the costs for each contract. The data is then uploaded to FairFleet, photogrammetrically evaluated and verified by FairFleet, and then finally delivered to the customer,” said Wunderlich.

“At best, you have little to no contact with the customer and can just concentrate on the flight once details of the project have been agreed by both parties,” Wunderlich added.

I asked Wunderlich about the challenges that face him as a professional drone pilot. He explained that mastering the technical part of the work is easy; he finds it daunting to comply with the legal requirements that come with the job, especially with the changes introduced in Germany in 2018.

“Where do I apply for a general permission? How to register with a tower? The list of questions goes on,” he said.

Despite these challenges, Wunderlich still finds his professional drone job exciting. “As an IT technician I’m glad to be able to leave the office and discover interesting and new places,” said Wunderlich. “Each flight is different because each project location offers its own challenges.”

There is more that needs to be done to promote the growth of the drone-service industry. And as pilotless drone operation is still a few years away, companies must encourage the training of drone operators such as Wunderlich to ensure the safety and quality of flight services.

What other problems can drones solve in the future? We can only guess. But what we can be sure of is that the future of the drone service industry will also change, requiring more data scientists and engineers from geospatial fields to fill jobs. Human skills such as foresight, leadership, and creativity will be required so that drone-service companies can create innovative products that will suit the UAV demands of various industries.

Engelfried foresees a major development of the services that they offer with the release of drones with Real Time Kinematic (RTK) sensors. “RTK sensors improve drone surveying significantly. RTK, plus specialized surveying with lidar, will play a large role in the future.”

I asked Engelfried about his take on the future of the geospatial industry. Will we be seeing more tech products or will we see innovative surveying services from companies like FairFleet? His reply was very positive.

“I think that it will be a mix of both as newer tech products often go hand in hand with better services. Remember when identifying roof damage was done manually for many decades? Now we can fly drones and let artificial intelligence do the work more efficiently. We can cut down costs while simultaneously reducing the processing time,” he said.

Can drone service companies like FairFleet and professional drone pilots like Wunderlich thrive in the sharing economy? Seizing the use of emerging technologies to solve old problems is just one part of the answer. Their continued success will largely depend on their ability to adapt to changes in government regulations and their ability to launch novel services for industries. They must continue to reinvent themselves in order to disrupt and not be disrupted.