Above: The Mortenson team prepares their senseFly drone for flight.

With a UAS, a construction firm finds value—in addition to what can be measured—in real-time assessment and data availability.

Surveying plays a crucial role in construction, from initial planning to final as-built verification, often in multiple phases. However, terrestrial survey methods come with challenges for construction, such as lengthy survey schedules, data that’s not dense enough, and the timing of data availability.

In March 2016, Mortenson Construction began a project with a long-time solar client. Mortenson would be involved in the complete scope of the project, starting with a site prep phase that called for moving 750,000 cubic yards of earth, through to final solar panel installation across the farm’s 350 acres.

Ongoing and near real-time profile generation can take place through regular UAV flight. This form of information and analytics could provide daily actionable topographic insight that is otherwise impossible.

Because of the large amount of earthmoving involved in the site prep phase, what concerned the team was the density of survey data, delivery timeframe, and data-collection time. Also, existing vegetation and other site characteristics would limit on-foot and vehicular access to certain areas for staking, further compromising the data accuracy of the overall site. Mortenson turned to using UAS to overcome these challenges.

Taylor Cupp, project solutions technologist for Mortenson, is involved in several types of projects with the company. A few years back, a friend of Cupp’s purchased a drone for recreational use.

“One day he was showing me all the cool things the drone could do, and I remember thinking about all the possibilities I could see it having on the jobsite,” Cupp recalls.

Fast-forward to the 2016 solar project, which was a chance to put that hunch to the test on the site-prep survey work.

Mortenson already had a relationship with RDO Equipment Co., a local dealer of John Deere and Vermeer construction equipment. Cupp knew there was a division of the company, RDO Integrated Controls, offering drones and expertise in UAS technology. So he reached out to general manager, Adam Gilbertson.

RDO Integrated Controls is an authorized dealer of senseFly and its eBee drone. Gilbertson was excited for the opportunity to show Mortenson the value of the eBee, saying,

“We were confident it would deliver on the data accuracy and timeliness factors that were important to the team.”

Gilbertson and three of his colleagues joined Mortenson on the project site to begin the experiment. 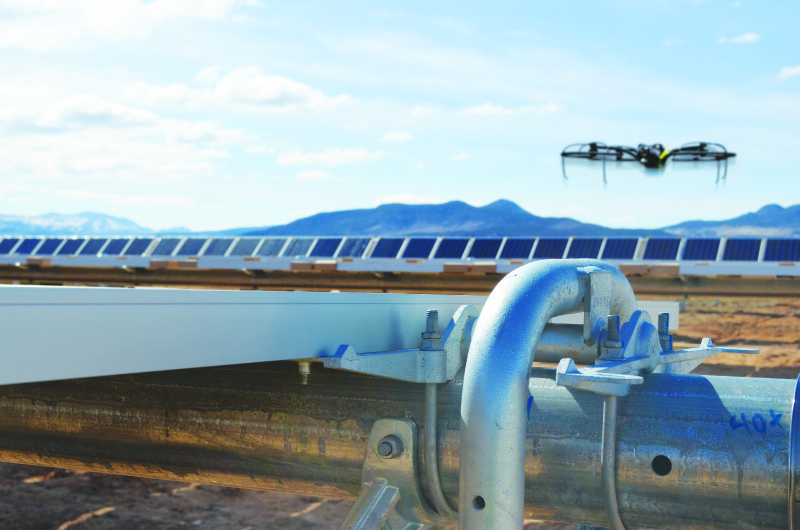 Above, below: The drone flew the site five times, total.

Mortenson relied on machine-controlled site grading for a quality check, and they performed initial survey work to establish control. Then, it was time for the UAS to take flight.

The eBee flew the site five times, with each flight lasting 36 minutes. In total, it generated approximately 2 billion data points at a density of 2 cm per pixel. According to Cupp, this was an “astronomically” denser amount of data compared to the terrestrial method, which pulled data points at only every 10 to 15 feet.

Aerial imagery was gathered and processed with photogrammetry to generate topographical data of finish grade and rough grade of the site. Thanks to the quick turnaround of the UAS, Mortenson was able to collect and analyze the data that same day.

In comparison to the terrestrial survey method, the UAS showed topo density improvement of 300 times, an 84% topo accuracy improvement, and a 40-hour time savings.

While Cupp says these metrics were crucial in proving the value UAS technology brings to the jobsite, the real value came from something immeasurable.

“Where we saw the major value of UAS was in the real-time assessment and availability of data,” he says.

The technology feasibly allows information to be captured throughout the life of the project. The constant flow of information enables more informed decision-making and adjustments by the team. It also allows consistent and frequent progress tracking.

As for how the UAS integrated into the jobsite, Cupp was pleased by how easy it was to operate, saying, “It’s almost too easy to fly!” He was able almost immediately to generate useful outputs that could cut down on lagging indicators.

The UAS also proved to be unobtrusive, according to Nick Gubelli, civil superintendent for Mortenson.

“Had I not known that someone was flying the jobsite, the shape of the UAV and the lack of any sound emission would have led me to believe there was only a bird soaring above the site.”

While Mortenson isn’t flying drones on every project site, the company is focusing on and excited about emerging technologies that capitalize on these new forms of output. Mortenson is currently researching new forms of computer vision and machine learning to make the most out of UAV data and better track productivity, progress, and quality.

“Drones fit perfectly into feeding data into evolving forms of big data uses,” Cupp says. What advice would Mortenson give to a firm looking to incorporate UAS technology into their service matrix?

Cupp says, “Ensure that the proper regulations are being followed, because the rule set is constantly changing. Additionally, test the process, measure the results, and improve the process in order to work towards an ROI on the technology investment.”