For five days last week, I was dreading coming to work on Friday. It was the day most of my staff was excited about, but definitely not me.

Let me backtrack. We at xyHt provide you, our readers, with lots of solid information about new technologies, skills, and ideas on operating your geospatial businesses. What we don’t often write about is the importance of team building in a business or, really, any organization.

So, a couple of weeks ago when our incredibly talented art director Karen Peacock approached the staff with the idea of entering a local 72-hour film competition as an exercise in team building, I had my doubts. We don’t do movies. Yet, I seemed to be the only one not thrilled at the idea of spending several days (mostly over a weekend) creating a six-minute silent film. Goodness, was I ever wrong. 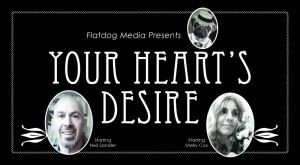 As I’m writing this, it’s Monday morning, a full day after we submitted our short film into the competition, and I have to tell you: it was perhaps the best thing we as a team could have done to galvanize our troops into an even tighter-knit group.

Looking back on those many hours of production, I now see why it worked so well and do recommend it for other businesses.

First off, none of my staff is much experienced in filmmaking. Only Karen had participated in this competition, and that was four years ago. The night before we began production, when someone asked who were the experienced actors, we all looked around the room and shrugged.

We were clearly out of our element, and this would either bring us together or drive us into disarray. The only way we’d make it as a team was to work together and have each other’s back.

When I viewed the final product, I was stunned. It’s great! You can watch it above, or on our website or YouTube channel; it’s called Your Heart’s Desire. We were even able to include our editor (at large) Gavin Schrock in Seattle. Watch the video to see him play the role of film critic Art Filmore.

This concept of team building should not be ignored. It can elevate your team to new heights and certainly build morale. In this issue’s cover story, industry icon Charlie Trimble describes, on several occasions, the importance of team building throughout his career.