Above: The surveyor who set the original stake in Hyu-ga, Japan shows the spot in the Zenrin map book of the Miyazaki Prefecture.

A few months ago, June 10 to be specific, I received an interesting phone call from Dale Lee in Port Orford, Oregon. Apparently, Dale does a lot of beachcombing, and he had found a survey monument that had washed up on the beach. This wasn’t the first one he had found, but it was the first one with legible writing that enabled him to find out where it had originated. Dale determined that the monument had been manufactured by Ripro Corporation of Japan that supplies approximately 60% of the survey monuments used in Japan. He wrote to the company, and to his surprise Kengo Okada, Ripro CEO, responded saying he would like to meet Dale and see where he found the monument. 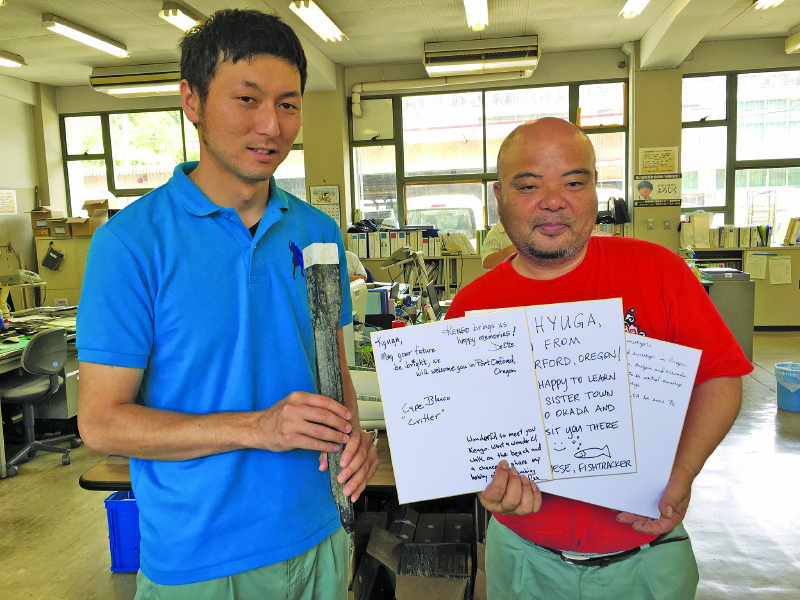 Surveyors from the Hyuga city surgery office hold the returned stake and a note of thanks from the local forestry company whose lease the stake had been set for.

As it turned out, Kengo was on a business trip that included stops in both Europe and America, so a pleasant way to end his trip would be with a stop in Port Orford. John Hohol, head of the National Society of Professional Surveyors (NSPS) delegation to the International Federation of Surveyors (FIG), is a longtime family friend of Kengo and offered to travel with him from his final meeting in Wisconsin to Oregon.

This wasn’t the first time John and Kengo had traveled together to see one of Riproуs monuments that had made the trip across the Pacific. (See sidebar, below.)

Daleуs reason for calling me was partly that he wouldn’t be able to greet them at the airport on June 14 in North Bend, so he asked if I would, plus he thought it would be nice if local surveyors were also on hand to greet them. I contacted several other surveyors, but because of the short notice and work schedules I was the only surveyor available.

Aimee McAuliffe, Professional Land Surveyors of Oregon executive secretary, was able to send me PLSO memorabilia to give as a gift to Kengo. In return, Kengo gave me a copy of the childrenуs book that was a result of the monument mentioned below, plus a replica of the monument found by Dale.

It was arranged that we would get together again the next day with Dale to visit the location of the found monument just a little north of the Cape Blanco Lighthouse, then retire to his house for refreshments. 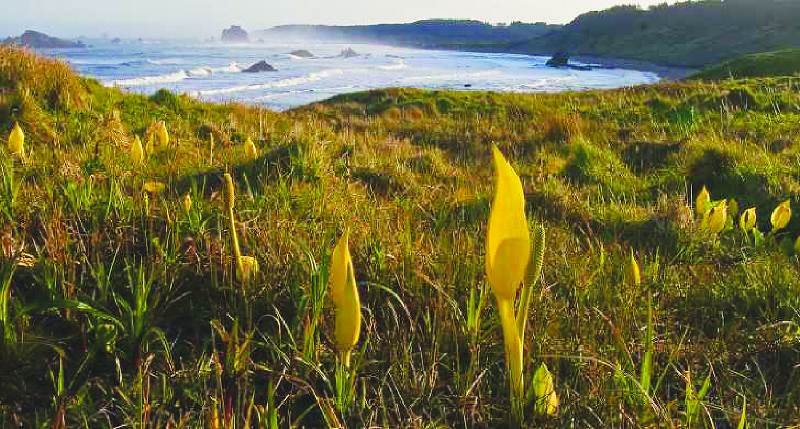 Left: Kengo Okada, the author, and John Hohol upon arrival at the North Bend airport.

The stake’s journey evidently began along a creek in the forested area upland from Hyu-ga City (or Hyu-ga-shi; pronounced Hyuuga), in Miyazaki Prefecture, on Kyushu Island–the southwestern-most of the four main islands of Japan. The area has a rich history, including a role in key campaigns of competing samurai clans. Legend says that first-century Emperor Keiko- gazed out to sea near what is now Hyu-ga City and said, “This country faces straight toward the sunriseс”–and, as it turns out–Oregon.

When Ripro researched to find the original location of the marker, they were able to track the purchase by unique identifiers printed on each marker. This lead to the Hyu-ga City survey office and two city surveyors who had placed the stake to delineate a lease area for a local forestry company. The surveyors and a forestry company executive named Miura were eager to show a Ripro representative the spot.

Miyazaki Prefecture, like most of Japan, is subject to annual torrential rains; in fact the frequency and severity of typhoons hitting Japan has increased in recent decades. It is unclear as to precisely when the stake was dislodged or if it had been during a typhoon, but when it was dislodged, it would have travelled quickly down the adjacent creek into the Mimi River (Mimi-gawa).

Major rivers all over Japan, like Mimi-gawa, are lined with an amazing system of levees, many dating back to the Shogun Tokugawa era when samurai clans (idle during the centuries of relative peace among the clans) were often kept busy with massive public works. During the heavy rains, the levees prevent flooding but turn the rivers into raging torrents. The marker would have been ejected far out to sea in a matter of hours.

Items from Japan often wash up on the west coast of the U.S., Canada, and Alaska due to the strong current, called Kuroshio (Black Current). The wayward survey marker followed this current and made it to the south coast of Oregon, to a spot near Port Orford and the Cape Blanco lighthouse.

The parties were able to meet in Port Orford, where Dale Lee took Kengo Okada for a stroll on the beach where he had found the marker. I missed making the connection on the beach, which was unfortunate because it was a rare, beautiful, nearly windless day, but I got together with them at Daleуs house for refreshments several hours after.

Kengo showed us pictures of where the monument began its journey from alongside a creek. The monument was originally set in 2014, and Dale found it in May 2016. When I went to the airport to see them off, Kengo asked if it would be okay if he passed my gifts to the surveyor who had originally set the monument. I said, “of course,” plus, I gave him one of my rebar caps to pass along.

In case you were wondering what material the monument was made of, Kengo told me that, “Protecting the environment and recycling are key elements to Riproуs success. Waste plastic materials are recycled and turned into survey markers. All types of plastic waste are used: scrap wrapping film from airport cargo, chemical plants, and trucking operations, plastic tape, carpeting, car parts including plastic bumpers, etc.”

Kengo gave me a product catalog that displays the large variety of products manufactured by Ripro. These types of markers have become fairly ubiquitous in Japan, and you can even find plastic survey stakes in local hardware stores along with surveyorуs ribbons, tape, safety gear, and even construction levels.

This event has opened up new ties between these two cities and the surveyors of Oregon and Miyazaki Prefecture. A hand-written note sent from forestry executive Miura on the local Hyu-ga forestry translates to:

“I was surprised to see that the stake had made it all the way to Oregon. This stake has connected us by fate. In the future, we hope that Hyu-ga City and Port Orford can form a strong friendship.” 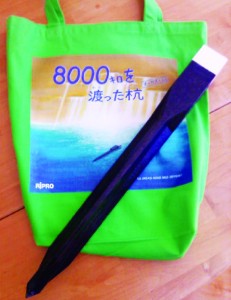 In 2012, a Ripro plastic survey stake was plucked from the sea by a local boater near Orcas Island in northwest Washington. Initially, it was thought that the stake had been part of the debris from the devastating To-hoku earthquake and tsunami of 2011 and was reported as such by local Seattle television news. Further research showed that the stake had come from a different part of Japan and likely had been dislodged from its original location by a typhoon six months before the earthquake. The story was nonetheless quite interesting and generated a lot of interest on both sides of the Pacific.

A childrenуs book was written based on the 2011-2012 journey of the survey stake. Titled Little Orcaуs 5000 Mile Odyssey, the full-color, hard-bound book (in both English and Japanese) was produced by a cross-Pacific team that included Ripro Corp and John Hohol. Read the PDF version here!