Typical linear lidar systems repeatedly fire a single beam, each time measuring a single location on the ground. They collect data at a given resolution, which is also the processing resolution. By contrast, a Geiger-mode system is an array that illuminates a large area on the ground, capturing the elevation of each point, and the processing later determines the output resolution.

This Geiger image of Raleigh, North Carolina, is being used to help a client analyse critical transportation infrastructure.

According to Mark Romano, geospatial product manager for Harris Corporation, Geiger-mode lidar is “a completely different technology type” from linear lidar. He says it enables much higher and faster collection flights and much higher resolutions than typical current linear systems.

Harris has been selling Geiger-mode lidar to the military for about 16 years, gaining experience in designing and fielding sensors and supporting them in theater environments.

The key component of a Geiger-mode lidar system is essentially a camera–albeit a very expensive and exotic one. While Harris has been using such a camera for military contracts, until recently the U.S. government did not allow it to be used for any other application, even for non-military government customers. About four years ago, however, the government allowed manufacturing of the camera for commercial use, and this enabled the transition of Geiger-mode lidar from government to commercial markets. Additionally, over the last few years, Harris developed a wide-area mapping system as opposed to the more tactical-type systems it had previously developed. For the new system, Romano explains, the company developed a more advanced and larger format camera.

These cameras have advanced in their size and form factor, and they will continue to evolve to larger and larger camera arrays, just like most imaging technology has over the years. This means that we can fly higher and faster and get higher resolutions more cost-effectively. 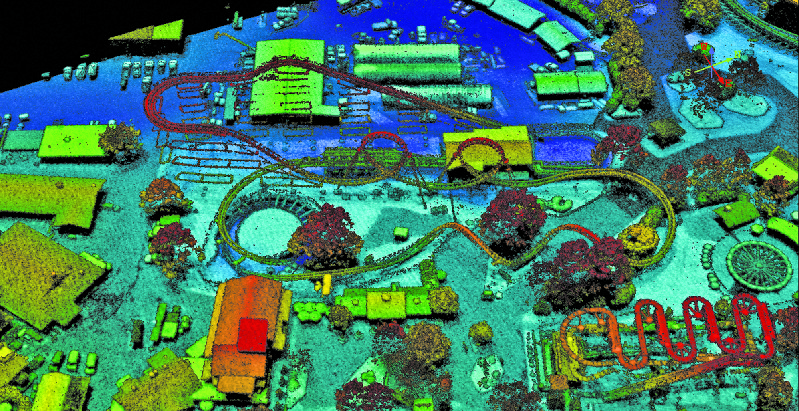 A Geiger lidar image of the Carowinds amusement park in Charlotte, North Carolina.

Right now, according to Romano, Harris manufactures the only commercially operational Geiger-mode sensor. “I can’t speak to what competitors might be doing,” he says, “but today we don’t know of any others being developed. We are delivering at 8 ppsm what others deliver at 2 ppsm, for the same price.” Harris is rapidly scaling up its operations to meet market demand. “We’ve done quite a host of projects in different parts of the United States, and we have been very active forming partnerships and projects abroad,” says Romano. Last year, Harris acquired Exelis Corp., which had written automated algorithms for post-production of lidar data.

To be cost-effective, linear sensors are set up to collect at a specific resolution, and they always collect at that resolution. Conversely, Geiger-mode sensors oversample the area of interest. “So, we don’t collect at a resolution; we dictate resolution on the output to our process flow,” Romano explains.

For example, we can collect a state or a county and output data at various resolutions for various applications.

In the United States, state governments and the USGS have different “quality levels,” which are essentially resolution levels. USGS might use lidar data for terrain mapping at 8 ppsm while some utility customers need 30 ppsm to model power lines, power poles, or other fine detail infrastructure.

With linear systems, doubling the resolution requires either flying an area twice or at half the speed and altitude. With Geiger-mode lidar, by contrast, higher resolutions–say, 100 ppsm as opposed to 30 ppsm–require only minor changes in flight altitude. “The bottom line is: the higher the resolution, the more efficient we are in comparison,” says Romano.

When Romano began in the business more than 20 years ago, collecting lidar data for an entire city or county was considered a large project. Now, it is common to collect lidar data at the same resolution for entire states or countries.

We might fly an area for, let’s say, the USGS program, where they want what they call their QL2 spec at 2 ppsm, but, at the same time, we might produce products for the utility market where they might want 20 ppsm or 40 ppsm along linear corridors, or we can map roads and other street furniture and infrastructure. We can do building model extraction at very high resolutions, and that enables us to automate those processes.

The resolutions achieved by Geiger-mode lidar (approaching those of mobile terrestrial sensors), and the fact that the system produces image-like products as opposed to just elevation data, enables greater automation. For example, data collected by Geiger-mode lidar can be used to guide autonomous vehicles, which require very high-fidelity mapping of road geometries and such fine features as poles, signs, and overhead wire crossings in order to understand their environment. By knowing the solid geometry of the roadbed, crown, curves, banks, and slopes, the car can calculate safe speeds, lane changes, stop distance, etc.

“A lot of that work today is being done by mobile-mounted lidar systems,” says Romano, “whereas now we can collect a very large area, and we can carve out smaller subset areas for different markets. By collecting this kind of data at scale, you could have a whole state-wide collection and a secondary user, like one of the big auto manufacturers.”

“We can collect a state or county and output data at various resolutions for various applications.”

Aerial lidar data at high resolution also enables automation of mapping for other uses, such as disaster preparedness and emergency response. “For example,” Romano points out, “if I want to understand everything about my environment related to flood, I need to understand all the buildings and know their heights and footprints. Those things were done ad hoc in the past, but we can now enable them at scale.”

This helps federal and state agencies and insurance companies better understand risks and dynamically model catastrophe scenarios. “That data also is much wanted, but not affordable today,” says Romano.

I have one customer who sells a database to insurance companies based on the roof structure. They apply formulas to the replacement cost of a roof in a catastrophic event. Using these high-resolution airborne data, they can extract that information without having to pay for manual labor extraction to get that level of detail.

Utilities to date have been working primarily at just the level of the transmission lines, which are the bigger wires and towers that carry the bulk of power across the country. Says Romano: 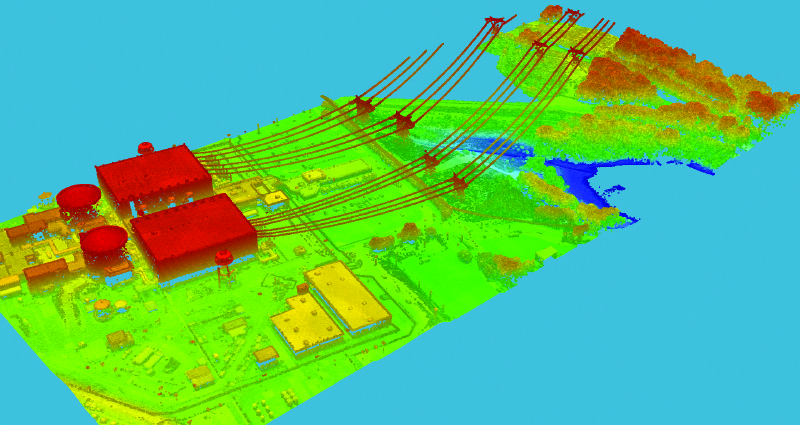 This Geiger image of a power generation station near Charlotte, North Carolina, will help a client with utility asset mapping and management.