Above: A prototype of the Civdrone UAV preparing to drill a stake into the ground.

A flying/staking robot has taken a huge step forward in automation for site layout, including road, rail, utilities, and energy applications.

Working the traditional way, how many surveyor-days would it take to mark the 300,000 points needed to lay out a solar farm? How many to stake out 100 miles of access roads on a wind farm project?

“We were amazed at how inefficient a lot of the things were at construction sites,” Yeshurun recalls. “At a port construction site we visited in Costa Rica, they had 19 surveying crews working for three and a half years. Sixteen of them were working with GPS for stakeout.”

Muller and Yeshurun, who had used UAVs to capture aerial imagery for monitoring, mapping, and creating 3D models, realized that they could be used for more than that. So, they left their jobs, co-founded the company Civdrone, applied for a grant from the Israel Innovation Authority, and raised venture capital.

Their funders also include Shikun & Binui, the largest general contractor in Israel, and ENEL, Italy’s huge energy company, which has wind and solar power farms all over the world. Yeshurun and Muller are alumni of the Technion – Israel Institute of Technology, which also invested in Civdrone through the Technion DRIVE accelerator.

Yeshurun and Muller developed their first prototype at the Infralab innovation lab in Haifa. It can mark points with an accuracy of half an inch, according to Yeshurun, who is now the company’s CEO.

“It is being tested right now in a real construction project in Israel,” he says.

Using a dual-antenna RTK system and an inertial measuring unit (IMU), he explains, the UAV lands with about 2-inch accuracy and knows its orientation. It then moves the marking mechanism within its footprint, which is about 8 in. by 8 in., to achieve the final marking accuracy.

To insert each stake into the ground, the UAV uses a drill. Depending on the mission and the length of the stakes, the UAV carries between 40 and 60 of them. Given the UAV’s limited flight time, Yeshurun points out, there is no need to carry a larger number of stakes.

Currently, Civdrone’s payload weight is about 20 lbs. It therefore falls under the Federal Aviation Administration’s “Small UAS Rule” (Part 107) and has to be flown within line of sight by a certified UAV operator.

As the company grows and its product matures, Yeshrun expects to adopt a business model in which its clients buy the hardware outright, buy a subscription for the software, and buy the stakes in bulk. Right now, he points out, any CAD software one might use to plan the mission can output a file in csv format that can be uploaded directly to Civdrone’s platform.

Yeshrun elaborates: “We have developed our own GUI on top of PX4 for flight marking mission planning. We are developing an app for the builders to use in order to read the information from the stakes.

“Moreover, we have integrated our marking mission planning to the Autodesk platform, meaning that you can choose coordinates on AutoCAD and directly send it to our drone. This will generate the marking mission, and off we go.” 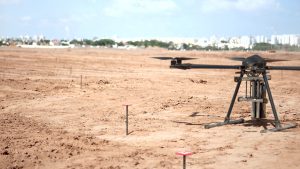 A digital rendering of the marking mechanism as it would look mounted on an existing UAV.

Once the UAV takes off, it returns about 45 minutes later; the operator swaps the battery, loads a new magazine of stakes, and presses “continue” on the flight control software on a mobile device.

In a couple of hours, the system can insert more than 100 stakes in the ground, Yeshurun says, each with a unique near-field communication code with clear construction instructions generated just before insertion.

“It takes us less than a minute to mark a point,” he says.

Construction sites are very dynamic, Yeshurun points out. “So, how many surveyors do you hire? Two? Three? If you hire only one, that may become a bottleneck, as you are waiting for your crew to mark your points. That is one advantage of a system that can mark up to 500 points a day with one guy.”

Another advantage of digitizing the process is that it makes it more reliable.

“We know when a point was marked and that it was marked correctly,” Yeshurun says. “We also know who touched that stake—whether it was a contractor or quality assurance person or someone else.

“This information is very valuable, especially when these contractors work on a daily basis and get paid by the day. If a contractor said that he was working on a given day but none of his guys read a stake that day, it probably means that he did not work. So, this information is valuable as data to enter into project-management software.”

Yeshurun points out that re-staking is now very simple: all you need to do is scan the stake that the contractor messed up and press the re-stake button. Minutes later, a Civdrone will fly in and put a new stake into the ground.