This entry is part 71 of 80 in the series Pangaea

First, a bit of “geosplaining.” When we started this newsletter we looked for a name that had a “geo” feel without having geo in the name. For those who don’t follow geology, Pangaea was the most recent supercontinent which was formed roughly 200 to 250 million years ago, according to the plate tectonics theory.

Flash forward a few years when I ran across an interactive map that shows where your home would have been on Pangaea. Created by software engineer Ian Webster by adapting GPlates—an academic project providing software for geologists to investigate plate tectonic data—this map allows you to input your location and go back in time to the age of Pangaea to discover where your home would have been on that supercontinent. Take a look at the screenshot below. New York’s no longer on the coast; but as consolation a visit to Africa could be a day trip. My hometown, AKA middle-of-nowhere, USA, is now middle-of-nowhere, Pangaea. Sigh. 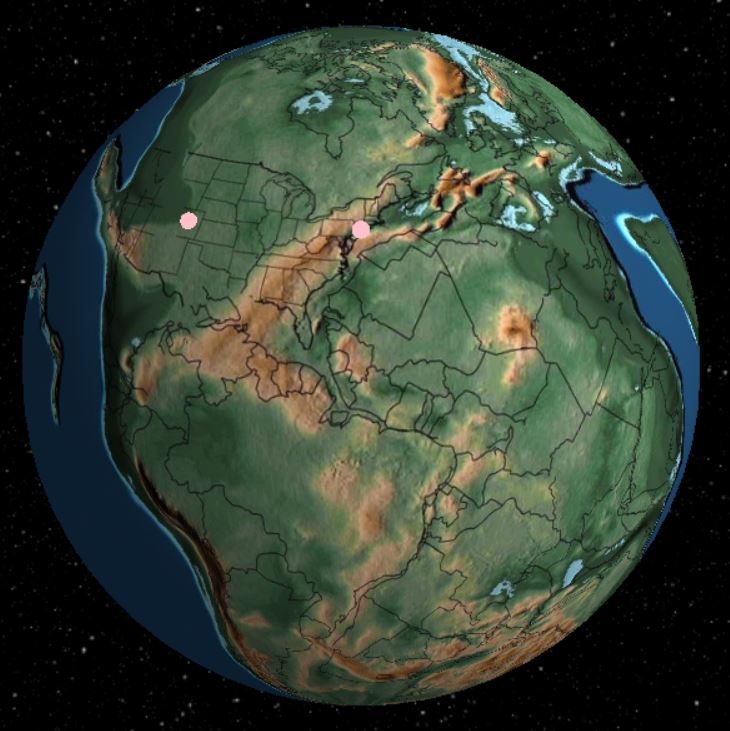 Novelty aside, this interactive map is great way for anyone interested in learning about Earth’s past, including plate tectonics. Why is plate tectonic theory important? According to the USGS: “The theory has unified the study of the Earth by drawing together many branches of the earth sciences, from paleontology (the study of fossils) to seismology (the study of earthquakes). It has provided explanations to questions that scientists had speculated upon for centuries—such as why earthquakes and volcanic eruptions occur in very specific areas around the world, and how and why great mountain ranges like the Alps and Himalayas formed.”

The map has a wide variety of features to help you study the Earth’s past. You can access a timeline that ranges from 750 million years ago to today and also features a “jump to” menu that allows you to view Earth from aspects such as when dinosaurs first appeared to when they went extinct, the first reptiles, first primates, plus the Triassic, Jurassic, and Cretaceous periods, and so much more. What a great way to introduce the next generation to the wondrous history of this awesome planet we call home!