How feature inspection, assessment, and reporting are now available to non-experts (and experts alike).

In the early 2000s, Leon Toorenburg was in Africa mapping the locations of communications and utility towers. He was carrying a laser range finder, a camera, a GPS receiver, a laptop, and a field stick. It occurred to him that there had to be an easier way.

So he created IKE, a product that combines the first three of those devices, enabling the user to “rectify a photo using a hand-held device and measure features within that photo,” says James Pardue, senior vice president of sales at ikeGPS. IKE was adopted by utilities and by defense and intelligence agencies.

However, an IKE unit sells for about $11,000 and requires maintenance and training. Toorenburg’s next step was to create a much cheaper and simpler version that would “create an opportunity for millions of new people to collect information that up until then was just in the realm of expert users.”

That effort led to the Spike, which is priced at $500. It has a laser range finder with a 650 ft. range, attaches to a smart phone with a clamp, and connects to it via Bluetooth.

A user simply points at a surface and takes one or more photos. The software displays the location of the user and that of the target, together with its distance and true bearing, as well as the length of any line and the area of any polygon drawn by the user, minus any cutout the user has drawn. For example, a painter might want to know the area of the side of a house minus that of its windows.

Spike, Pardue says, is “always about the inspection, assessment, and reporting of a feature.” Examples he cites include “defense and intelligence clients that want to know how much ladder or rope they might need for a given mission” and “someone at a transportation agency that needs to measure right of ways or inspect and locate signage.”

The low cost of Spike units compared to high-end professional geospatial equipment enables companies and public agencies to issue them widely to their field staff.

To enable measurements of distances that do not fit in the field of view, Spike provides a point-to-point feature. The user points to point A, takes a photo, then points to point B, and takes another photo. The software displays the two photos side by side and the distance between the two points, as well as any vertical offset between them. 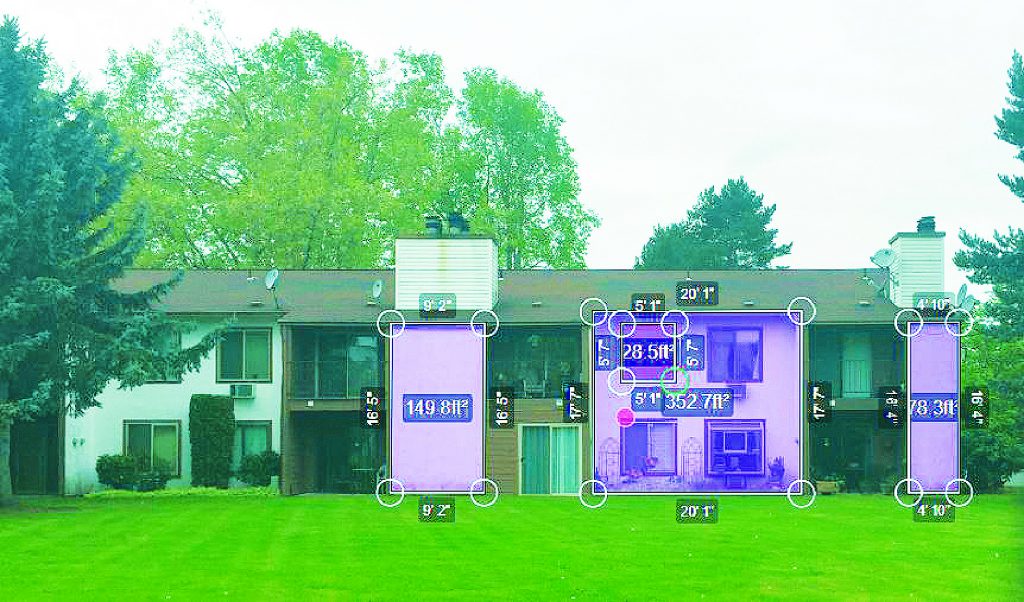 The software provides the area of the entire surface delineated as well as the area after subtracting any “cut outs” (areas inside other areas—in this example, a window).

In the past few years, the quality of inclinometers, compasses, GPS receivers, and data processing by mobile phones has improved significantly. It has also become more common for people using consumer-grade mobile devices to collect data and add map content between the many features that have already been located accurately with professional equipment.

“Not everything requires high accuracies,” Pardue points out. “Spike is almost purpose-built for people who can learn in under an hour how to operate it.”

The device’s biggest limiting factor, Pardue acknowledges, is its accuracy.

“We say that Spike is accurate within +/- 1% of a real-world measurement. Then we allow the user to determine whether that accuracy is good enough for their purpose.”

Yet, he adds, the hardware in mobile technologies has matured to the point where it can “consistently deliver good data that we can harvest and use.”

If Spike has not acquired enough tie points to accurately process an image, a surveyor or an engineer would want to know, but a novice would not understand that information. So, instead, the device will say, “Can’t take a photo at this time” or, “Calibrating.” The system also requires users to manually adjust an alignment rectangle before it will process a photo.

Applying “some best field practices,” Pardue says—such as holding the device steady, making sure that there is enough light, not pointing the laser at windows, and pointing as perpendicular as possible to the surface being measured—will provide the best results. 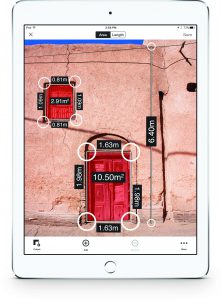 A Spike unit attached to an iPad. On the screen, the software displays the measurements of the sides and areas of two surfaces and the distance between two points. 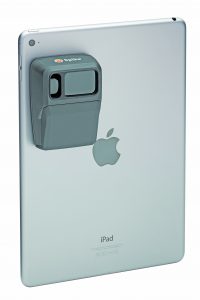 The Spike workflow is “entirely up to the user,” Pardue says. After collecting data in the field, users have a choice to measure on the device or on the Spike Cloud. This enables them to work on a bigger screen than the one they carry in the field and allows other team members back at the office to process the data.

Most users export the data they collected as a jpg with an EXIF tag on it; other export options are .pdf, .xml, and .kmz.

“The .jpg EXIF files are really important because many digital form providers find that they are easy to use,” says Pardue. “It is something that we developed in coordination with Esri so that we could talk well with Survey123.”

Another export format contains, in addition to the data points, the photogrammetric measurements used to orthorectify each image.

Survey123, one of Esri’s two mobile data-collection apps, is based on forms, which Spike automatically populates. The other one is Collector, which is map-based, and ikeGPS is now working to integrate with Spike. Both can work in connected or disconnected environments.

ikeGPS is also a part of Autodesk’s developer network; it does do not have formal relationships with Bentley or Intergraph. “The beauty of the deliverables that we’ve created is that they can be imported into any of those software platforms,” says Pardue. “We want Spike to be laser-focused on that field data collection piece, but then where that data goes is up to the user. We don’t have any backend workflow.”

ikeGPS is not pursuing the integration of Spike on UAVs. “However,” says Pardue, “we have a full suite of SDKs and APIs that we can make available to someone who wanted to try to do that, such as a partner or an integrator much larger than us who can put those kinds of resources to it to develop and deploy that as a solution.”