How to promote 3D land administration for a 3D world.

We live in a 3D world, so shouldn’t we be basing decisions on 3D data?
When people think about the word “cadastre,” they might envision a two-dimensional map of boundaries, but there is more to the concept of a cadastre than who owns what. There are considerations of access, usage, economic potential, and the health, safety, and welfare of stakeholders in both the immediate and regional vicinities—in all dimensions.
For an examination of the concept of 3D cadastre we sought an international thought-leader on the subject, Dr. Serene Ho, research fellow with the Centre for Spatial Data Infrastructures and Land Administration, University of Melbourne in Australia. Serene’s research and publications seek to advance consideration of multi-dimensional relationships into the complex world of land administration.

xyHt: If you had to give an “elevator speech” to explain 3D cadastre to the layperson, what might you focus on? What key points would you include if summarizing for a surveyor, real estate agent, or land-use professional? 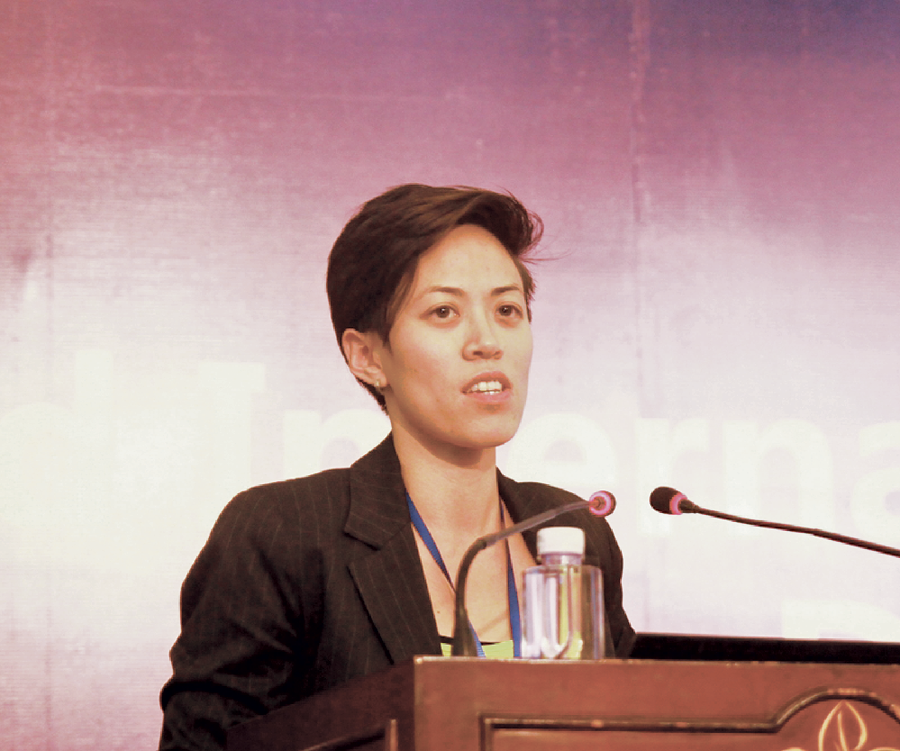 Serene Ho: The “sexiest” part of the whole 3D cadastre concept has to be as an aggregator of knowledge for the community’s benefit. “Where does my property end and where does yours begin? Do I need to pay for maintenance for the lift? How deep can I dig? Can I put rubbish there? What do you mean I MUST have carpet?”

These types of questions are only going to become more common as urban intensification policies—and pure vanity—result in incredibly complex structures for higher density housing in our cities. Managing urban environments relies on a hierarchy of data and information and a primary network of stakeholders. So, the elevator pitch might go along these lines:

Wouldn’t it be great if we could have an accessible, online 3D model of this building (we are in an elevator, after all)? We could refer to it any time we had a question about use, management, or maintenance.

This model could bring together all different types of physical, functional, and legal information about this building, its spaces, and its relationship to its immediate location.

This model could tell us about every owner and tenant’s rights, restrictions, and responsibilities relative to the space they occupy as well as to their neighbors, yet preserve the privacy of other types of fundamental information.

This could improve transparency in financial matters related to repairs and maintenance.

This could enable asset and facility management.

This could add value to emergency services and improve response times by improving spatial literacy about people and spaces in buildings.

xyHt: In one of your papers you mention that, to some extent, legal challenges facing implementation of 3D cadastre might be a “red herring.” We get the same impression about this subject and other geospatial matters that see resistance to change.

SH: After being immersed in this topic for the past five years, I am increasingly of the opinion that the term “3D cadastre” is perhaps a misnomer. To use the term “cadastre” is to make a direct link to registration and its technical processes.

The key argument provided in that paper was that many countries have actually been registering property with 3D attributes (albeit to varying degrees of success) for a healthy amount of time. In that sense, 3D registration does not appear to be an issue. Registration by its nature relies on a necessarily conservative approach, so attempts to tinker with registration when it isn’t (accepted as) warranted will likely be unproductive. In that paper, Victoria (a state in Australia) was provided as an example where the law appears to be non-committal about what format and/or technology registration needs to conducted in—ergo, Victoria doesn’t actually have a legal issue. I freely concede that some countries do and have brought laws in to fix this (e.g. China). But have we suddenly seen 3D (digital) cadastres emerge overnight?

But if we don’t have a legal issue, and if we are well on our way to resolving a lot of the technical barriers to moving to a digital environment, then the issue is most likely one that is cultural—and that opens up a very vast can of worms that people might not be happy to confront. The research has also tended to be driven by technologists and a focus on accuracy. Could framing implementation challenges as a legal matter be a way to absolve ourselves from the responsibility of tackling those thorny social issues that history consistently proves as being at the heart of mainstreaming new innovations?

Essentially, my feeling is that it comes down not to identifying what technology can do for us, but to challenge ourselves to identify what we need to do to ensure that the right attitude and structures are in place to actually make that a worthwhile question to answer.

xyHt: Some people have raised a technology matter as a challenge to effective 3D cadastre (as well as 3D geodesign, BIM, and GIS in general). 3D in GIS (and even some engineering environments) is still “2-and-a-half-D”: elevation is still an attribute. These high-rise and industrial environments have complex geometries with high value per cubic unit. Are the not-quite-3D tools a hindrance (or are there bigger issues to worry about)?

SH: I think BIM implementation has shown that “disruptive technologies” are disruptive to organisations. It is a truism that people dislike change, and, in the case of introducing new technologies, certainly there will be a period of catch-up in terms of skill development, training, etc., before benefits are realized. Yes, I agree that 2.5D can be irritating, but I would argue it also has great value in building an incremental approach to change, particularly in supporting those new collaborative workflows and work processes that value-add from 3D technologies is predicated on.

xyHt: Localities and jurisdictions (for example, in the U.S.) have written into law and local statutes a wide range of rules and reporting requirements for high-rise real property. Each city might have its own flavor of “condominium” laws. There are subtleties of where private and shared space meet (is it the inside of the wall board or at the wall stud?). Is rule inconsistencies an example of some of the legal challenges to implementing 3D cadastre?

SH: I think the great thing about object-oriented approaches like BIM is that you can support any combination of private, common, and public property relationship via the data model. So this is again another instance of a “red herring” because of the term “cadastre.”

Imagine if we swapped “3D cadaster” for “3D DCDB’”(digital cadastral database or the property map)—suddenly the path forward seems a lot more straightforward. And, we just might have a great tool for opening a public discussion into understanding how condominium (strata) laws affect building governance and a way to model and analyze the effects of variable condominium legislation across states.

xyHt: Regarding cadastre in general: We seem to be in a golden age for land reform efforts globally. Particularly in developing and emerging economies, cadastres are being developed on a grand scale, and GNSS and GIS have been major enablers. But in developed countries efforts to develop national or even state and local cadastres are struggling. Why might this be?

SH: Path dependency! We are so proud that our systems have been around for 150 years, 100 years, 50 years that we find ourselves trapped by our own success and continue on our beaten paths. We want stability and security in our land administration systems, which unfortunately can result in monolithic structures.

Also, it would be remiss to discount government spending (or lack thereof) and the fact that the cadastral industry, unlike its construction and development brethren industries, is not perceived to have significant political or economic clout (despite all that we preach counter to this). How would we argue for funding for fixing what is perceived as not being broken? What’s the spin we need to have here?

Cadastral reform is difficult to argue for in countries not beset by corruption, weak property rights, etc.—those wretched issues that rely on good solid information about land and property to resolve. We are also totally distracted by the technology (and competing ones at that) instead of putting the focus on the community and the people.

The World Bank and the International Federation of Surveyors are espousing the concept of “fit for purpose” land administration for developing countries. They define this as, “Fit-for-purpose means that the land administration systems—and especially the underlying spatial framework of large scale mapping—should be designed for the purpose of managing current land issues within a specific country or region—rather than simply following more advanced technical standards.”

This emphasis on specificity and prioritizing technological innovation that addresses local needs is one we would do well to heed in our pursuit to realize 3D cadastres.