Above: Jeffrey Truijens, BIM manager and information and process coordinator for one of the general contractors for the Pontsteiger building. Credit: Josine Voogt Fotografie.

A new Amsterdam icon was developed completely with openBIM, proving that BIM can be a cornerstone for highly complex, multidisciplinary design and production coordination.

At the 2019 Geospatial World Forum, xyHt staff moderated a panel on digital construction that focused on the state of and trends in infrastructure, design, construction, and commissioning, and how digitalization can deliver measurable benefits over conventional practices.

This sounds like a mouthful, but a key premise behind the session and others like it worldwide is that the increasing demands for local infrastructure improvements and new developments—let alone global demands—cannot be met with legacy tools and practices.

As proposed solutions like BIM are still in the early adoption stage, we’re pleased to publish this article on an exemplary project presented at the panel we moderated. It’s an award-winning project that produced not only an iconic building but also a shining example of realized BIM and a celebration of the possible.

If your practice touches construction and infrastructure development in any way, then BIM soon will affect your work, if it hasn’t already. Whether these impacts represent opportunities may be a function of how well you’re prepared to adapt and learn about BIM. Rather than focus on the purely mechanical elements of the building construction, here we speak with the BIM practitioners who coordinated this project and provide BIM concepts and terminology to get you started.

Incidentally, the author and I had an opportunity to visit Pontsteiger (“the ferryboat”) building that dominates the shoreline of a main channel near Amsterdam and saw how well the pre-engineered elements fit together (within millimeters). It’s a testament to the execution of measurement and positioning technologies and the practitioners who employed them.

“Pontsteiger” is the name of a luxury housing project in the northwest of Amsterdam’s city center in a large-scale redevelopment area. It hosts 366 apartments, 1400 m² of commercial real estate, a hotel, 500 underground parking places, and a marina for 40 yachts. Its design combines high-rise blocks with views and public spaces and is characterized by a large steel bridge construction.

The design started in April 2014, with construction taking place during 2015-18, resulting in a new icon in the city of Amsterdam.

The planning, development, and construction was done by De Nijs and Dura Vermeer, two general contractors in The Netherlands, along with an extensive list of 85 participants, including architects, designers, engineers, “co-makers,” sub-contractors, and suppliers.

What makes the project special is the extensive use of openBIM processes and collaboration through the entire project, which enabled all project participants to collaborate and share information more easily: improving data fidelity and enabling the development of data models before construction, which ensured better planning, design, and clash detection. 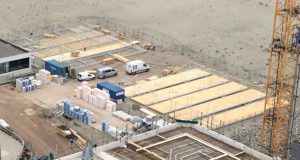 Pictured are pre-engineered structural sections of the bridge apartments.

At the beginning of the project, the two general contractors defined a set of BIM agreements to ensure openBIM collaboration among the different parties, encouraging an integrated design as well as an optimization process from BIM to production and assembly for suppliers and producers.

The overall mindset was to use and combine available knowledge and standards among the different parties instead of reinventing them.

Jeffrey Truijens, BIM manager and information and process coordinator at Dura Vermeer, explains the ambition of these BIM agreements. “For this project, we wanted to achieve BIM level 2, which means the development of building information in a collaborative 3D environment with data attached, created in separate discipline models.

“This was ambitious because at that moment many parties only focused on level 1, using BIM but only for themselves instead of a collaborative and shared 3D environment.”

The final BIM agreements contained a definition of the project purpose, process, and result, which reflected how the BIM level 2 ambition was to be realized.

One “mindset change” was that the BIM would be the primary information point of truth for everyone. Truijens explains, “Until the design phase, people trusted the BIM-derived documents more than the BIM itself. For us, the starting point for BIM collaboration was the model itself. Also, we made agreements on the quality of the models and what to do with them once they were created.”

In addition to defining the project ambitions, the BIM agreements documented that all parties would help each other to work and communicate effectively with Industry Foundation Classes (IFC), an open file format used for interoperability among industry BIM programs. This agreement was necessary because more than 3,000 different versions of IFC models were delivered by more than 50 different disciplines.

Truijens says, “During the initial design phase, models were exported to IFC and checked by the contractor every two weeks with results shared and discussed. The key was to export the right information with IFC for other parties.”

Also modeled in BIM was a hanging platform that enabled safe working conditions beneath the pre-engineered sections of the bridge apartments. 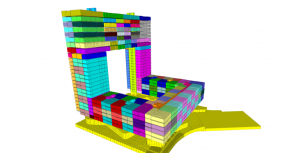 Using classifications on the data models, it was possible to quickly visualize which apartment types were in the building. This helped facilitate communication with the investor and other involved parties.

This working method enabled different parties to design different parts of the residential building simultaneously, a method known as concurrent engineering. As a result, both project development time and time to market decreased, productivity improved, and costs were reduced.

“After these models were merged, we’d sit together, look at different design challenges and solutions, and learn from each other, while at the same time being productive.”

During the next phase of the design, two BIM directors oversaw clashes between the architecture, structural engineering, and building services. They hosted weekly meetings with additional “co-makers” that were added to the project in order to resolve clashes and other model related issues.

In addition to overseeing the meetings, the BIM directors helped colleagues with updating the models and ensuring that everyone was working with the right BIM. “Their input definitely added a lot of value to the project,” adds Truijens.

The openBIM approach was extended to the construction phase, where BIM coordinators performed model coordination between demand and supply models from production partners, who had to make use of as much prefabricated material as possible for building speed. Several coordination models were built to allow for checks using Solibri Model Checker and IFC models.

“For example, we used visual coordination by putting all the different supply models together in combination with automated clash control. Also, we did a comparison between the demand and supply models to see if the supplier really delivered what was demanded. There were many different building parts that came together, so this modeling process had to be coordinated well,” says Truijens.

The coordination models were kept up to date by the BIM coordinators, and the finalized aspect models were frozen in the document management system so production could start. Using an openBIM workflow, 90% of the building was modeled in 3D and free of clashes. The total collection of IFC models formed the Solibri Model Checker coordination model. 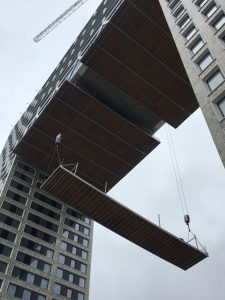 The prefabrication of most buildings happened offsite in elements as large as possible to minimize production time onsite. Pictured is the hanging platform with a prefabricated ceiling attached to it onsite.

An issue-management workflow was developed so managers could deal with remarks on hundreds of dynamic models with many project members. Complete issue management of over 6,000 issues was achieved with BCF and BIMCollab.

BCF stands for BIM Collaboration Format, which is an open file format that is used for interoperability among industry BIM programs. BIMCollab is a cloud-based issue-collaboration platform for BIM that offers a structured way of storing, sharing, and solving the BCF issues, including reliable history tracking in any BIM development process.

Says Truijens, “The BIMCollab platform helped us communicate in an easy manner and look up where the issues are that need to be solved, reducing email time.”

The prefabrication of most building materials happened offsite in elements as large as possible in order to minimize production time onsite. The designers and suppliers of these materials engineered everything in 3D BIM models, while stakeholders shared BIM information via IFC and managed issues with BCF.

The use of IFC and BCF led to a highly integrated BIM coordinated model, with demand and supply models substantially reducing costs. To facilitate the assemblage process, a BIM of the entire construction site was made, including cranes and other temporary equipment, and it was updated during the construction phase.

The project proved that highly complex multidisciplinary design and production coordination through IFC is indeed possible. By effectively managing a strategy for the use of IFC information, all project teams benefited from having access to the right data to manage change throughout design and construction.

The project was a joint ambition based on transparency and perseverance to stick to the plan that was essential to optimally realize the building using open standards. In October 2018, the Pontsteiger project won the 2018 Building Smart International Award for Construction award, as the building was developed completely according to BIM-standards.