Mini-hydro surveying is wet, wild, and wonder-filled in the Scottish Highlands.

When Scottish surveyor Stuart Ross heads to the Highlands to survey for one of the region’s many small-scale hydro schemes (mini-hydro), he always packs his camera. When the rain stops and the sky clears, he wants to capture the view, not just the data.

The Scottish Highlands is known for its lush, mountainous terrain. Warm, wet, unstable air from the Atlantic Ocean brings rain, wind, and changeable weather conditions. And with a population of only eight people per square kilometer, its barely touched environs are home to unique flora and fauna.

Stuart Ross is a surveyor and small business owner working in this beautiful region. At times the environment is challenging: “When I start off some mornings it’s just so, so wet,” he says. “I just can’t wait to be finished for the day.” At other times, he feels enormously lucky: “I get to take my camera into beautiful, unbelievable wilderness.”

Stuart is based in Roy Bridge, Inverness-shire, and the majority of his surveying work in the Highlands is for new and existing small-scale hydro schemes. He and his sole employee are known for their expertise on these projects, which they perform for design engineers who have been commissioned by developers. They perform general surveying work, too, including for housing developments, street networks, boundary subdivisions, and deed plans.

Funding cuts to small-scale hydro schemes may soon reduce the number created, but until then Stuart and his employee enjoy a steady stream of work. 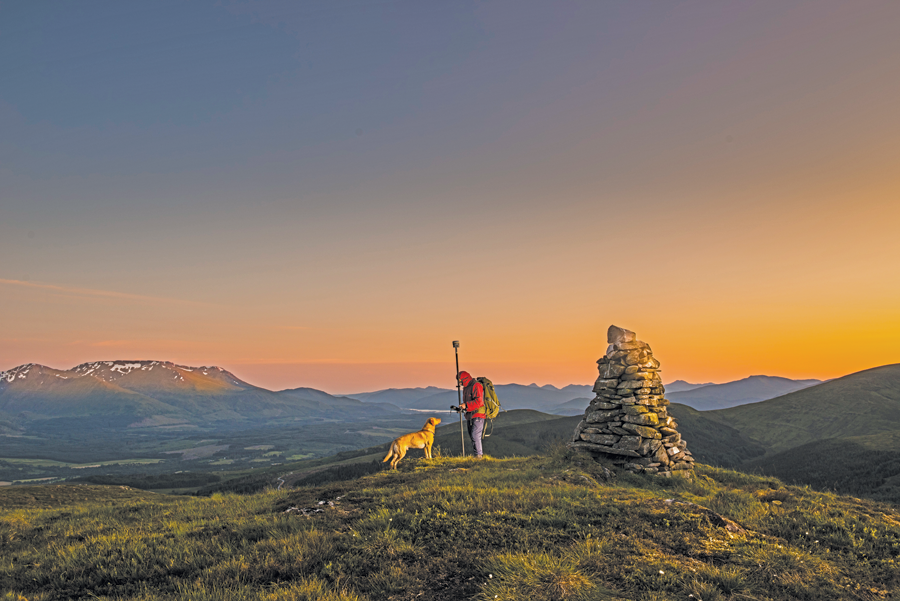 In this picture, which is “unashamedly stage-managed with artificial lighting and then photoshopped,” Stuart is with his dog on the summit of Beinn A’ Mhonicaig.

Stuart came to surveying by an alternative route. He initially studied building in Glasgow, then secured a job with a small building and civil contractor. Working mostly on the civil contracting side, Stuart performed a lot of the surveying work himself. After observing that the company also frequently hired outside surveying services, Stuart decided that starting his own business in this field was a viable option.

Hydro Schemes on a Small Scale in Scotland 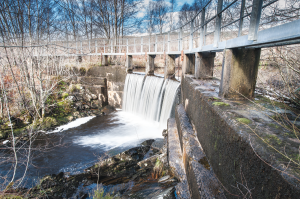 This weir was built originally to collect water for the public supply in the village of Corpach.

The west Scottish Highlands offer the ideal climate and terrain for hydro-electric power generation, i.e., the area is wet and hilly. As a result, Scotland’s glens (deep valleys) are home to numerous small-scale hydro schemes.

Small-scale hydro schemes typically generate 50 KW to 5 MW of electricity. The electricity is fed back to the national grid network, generating income for the hydro scheme developer.

Run-of-river hydro schemes divert water from a river in order to generate electricity and then return the water to the river downstream. During its diversion, the water flows through a closed pipeline or penstock, thereby turning a turbine. The revolutions of the turbine convert mechanical energy through the generator into electricity.

Stuart purchased a total station and data logger and entered the industry in 1998. “I got in when total stations and data loggers were relatively new,” he says. “So, I was learning about surveying software and the like at about the same time as everybody else. We were all new using the technology.”

Stuart purchased a robotic Trimble S6 total station in the mid-2000s and followed with a Trimble R8 GPS system about a year after the receiver was introduced. These days he uses a Trimble R10 GNSS system with a TSC3 controller, performing integrated surveying with his S6 when necessary. He post-processes and performs network adjustment in Trimble Business Center office software. And he takes his camera with him wherever he goes.

For his many hydro scheme jobs, Stuart performs topographic surveys of the land for proposed projects to create 3D land models for pre-construction design and planning and to identify any technical hurdles. He occasionally performs post-design stakeout to inform other consultants, such as ecologists.

It’s important that the water flowing through a hydro scheme’s pipe generate maximum energy, for example by being laid at the optimal gradient. At the same time, energy loss caused by sharp bends or the pipe flattening must be minimized. However, without in-depth knowledge of a mountain’s terrain, it’s challenging for engineers to specify where the corridor for penstock should go. Frequently, the mountain terrain reveals that an original engineering concept won’t work optimally.

The Highlands are uniquely remote and sparsely populated but also diverse. In this image, wide-open spaces and the right equipment enable trouble-free GNSS surveying.

“On paper it seems very easy to put a little dam across a burn [stream], but we usually identify at least one pinch point [high ground] to be excavated for pipe to go through,” says Stuart. “So, we are the engineer’s eyes and ears. RTK GNSS surveying enables us to think about the engineering constraints of a scheme. By reviewing real-time data we can autonomously take a view on whether the concept will work.”

Every proposed hydro site is different. Stuart describes some as “GPS utopia”—beautiful open wilderness with hardly a tree in sight. Others, he says, are “hell.”

“On one project there were trees everywhere with barely any place you could use the GNSS rover. I used integrated surveying [a Trimble concept) for some of it but needed to use targets and traverse through forest.”

Given the Highlands’ rugged terrain, the loss of GNSS corrections is a frequent challenge. “One of the most useful features on the Trimble R10 is the xFill,” says Stuart.

[While xFill is designed to “fill-in” when real-time corrections are not available (as the name implies), an enhanced xFill service through a Trimble RTX subscription model allows you to work without a base or network, full time, called RTX. xFill and RTX use augmentations for GNSS delivered via communications satellites. RTX is, in many ways, a type of PPP solution, but in real-time. See xyHt’s article on PPP-RTK from June 2012.] 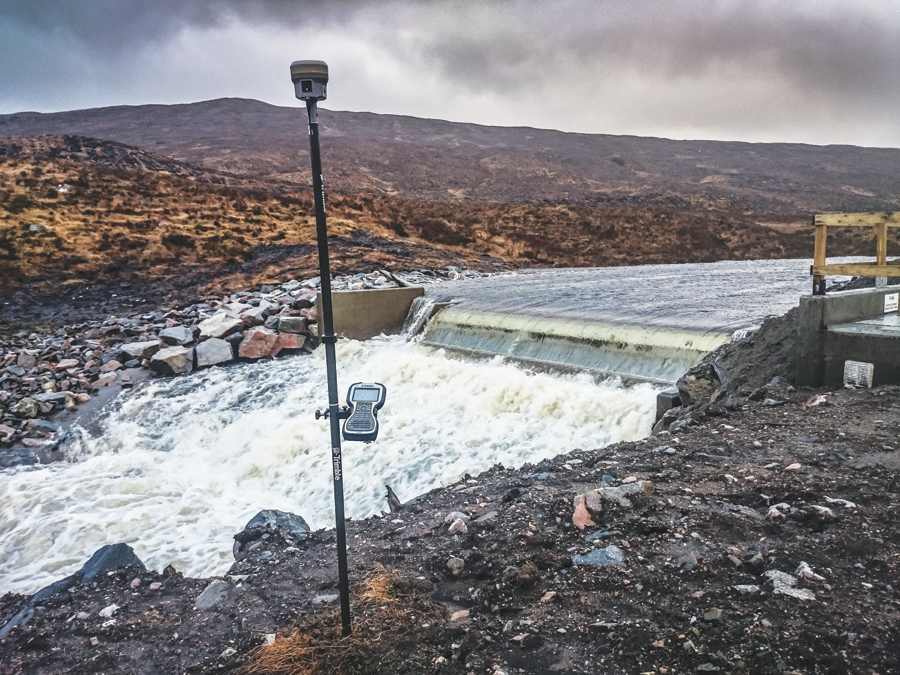 For example, if Stuart loses corrections when going over the crest of a hill, xFill lets him continue surveying with centimeter accuracy until he can receive corrections from his base station again. “It’s almost like snorkeling, because you go down and get what you can, then come up for a breath of fresh air,” says Stuart. “Believe it or not, five minutes of xFill gives you a lot of time to get things done that you wouldn’t otherwise.”

Once Stuart is finally out of range of his base station, he uses the built-in GPS on his TSC3 controller to roughly locate the other points he needs. This step informs him where to set up the base station for the next survey session.

Another challenge Stuart faces is a shortage of daylight for many months of the year. In the city of Inverness, the administrative capital of the Highlands, the shortest day provides only six and one-half hours of daylight. So, during the winter months Stuart hopes for “GPS utopia” every day.

“You can take 500 points with GPS without thinking about it and you haven’t stopped for a cup of tea,” says Stuart. “Compare that to two hours and only 50 points with a total station in a forest.”

A Day in the Life in Pictures

Stuart has always been interested in photography, and about three years ago he started using Blipfoto, an online photo journal that encourages users to upload a photograph (just one) every day. Stuart doesn’t take daily photographs, but already his journal contains about a thousand images, mostly of his work in the Highlands.

Stuart believes that using the latest surveying technology available has made him more efficient and productive. However, he says that in some ways he’s never worked so hard. “It used to be that we alternated between field and office—one day on the job and the next day at the desk. Now we’re four to five consecutive days on the job, whatever the weather.” And some days it’s just so, so wet.

Scottish surveyor Stuart Ross on the job and on the other side of the camera.

But keeping up with new technology will serve him in uncertain times. “The hydro-schemes will eventually dry up, no pun intended,” says Stuart. “But clients have an appetite for new technology, like 3D scanning and unmanned aerial systems.” Stuart is exploring options and positioning himself to take on new kinds of surveying work.

In the meantime, along with his advanced surveying equipment, Stuart will still take one device everywhere he goes—his Sigma DP1M.