It was two o’clock in the morning and pitch black, except for the red laser of the scanner. It pierced the darkness, accurately tracing the putting green’s profile.

Michael O’Brien was enjoying perfect working conditions on the historic Pinehurst No. 2 golf course: no rain, golfers, or sprinklers, or even the hint of a breeze. When he turned on his flashlight, he knew from the long shadows it cast that the scan would reveal the green’s complex, undulating surface, one that would be largely invisible in daylight to the naked eyes of the players in the upcoming 2014 U.S. Open.

To earn his place on this illustrious course, O’Brien, a landscape architect, had been developing his skills in golf course surveying for 12 years. Tournament work was just a side job for him at TerraVea, a professional services company that delivered as-built data for golf course architects.

He was thrilled, however, when Mark Long, author of the PGA Tour professional yardage books from his company, Tour Sherpa, accepted his proposal to use a laser-scanned topo in the books for the U.S. Open. O’Brien was playing in the big leagues now.

Since 1990, Long has developed yardage books for more than 100 professional golf tournaments, including the U.S. Open, U.S. Women’s Open, and tournaments on the PGA Tour and PGA Championship. The books illustrate the contours of fairways, rough, and greens; distances to the pin; landmarks, such as trees and shrubs; and bunkers and sand traps. Caddies can use the books to determine their location, calculate yardage, and make informed recommendations to golfers on which golf club to use.

Long had pioneered the use of real time kinematic (RTK) Global Positioning Systems (GPS) for tournament mapping. This technology enabled him to provide more precise and detailed course yardage books to professional players and caddies than those used by amateur golfers.

He had used the survey-grade GPS to collect mass topo for the golf professional’s first greens contour books. Players who referred to the books were informed on the precise elevations and slope gradients of the golf course, enabling them to achieve better scores. These books quickly became a trusted reference during tournament play. 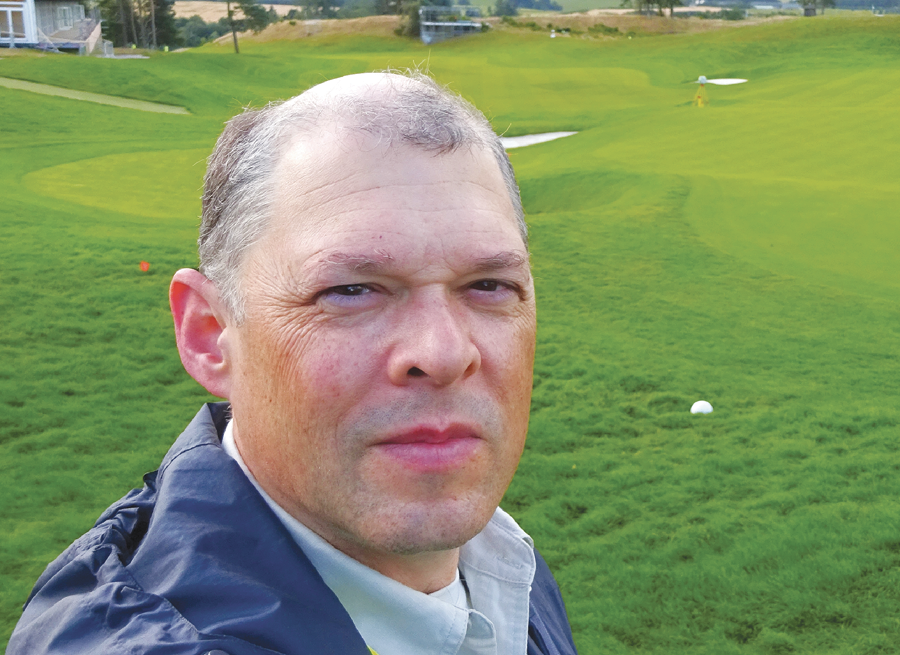 O’Brien has documented greens with laser scanning since 2009.

In 2012, at The Olympic Club in San Francisco, California, Long’s and O’Brien’s paths crossed. Long had been updating the yardage books for the 2012 U.S. Open, and O’Brien was scanning the greens for NBC Sports.

“We had a friendly, collegial conversation. I think he recognized a fellow obsessive,” says O’Brien. During this meeting, Long first mentioned his interest in using scanner topo for his greens books.

Changes in technology have marked O’Brien’s years of capturing the subtle but complex shapes of golf greens. When he started mapping golf courses in 2002, he used survey-grade GPS. This technology collects spatial data that users import into geographic information systems (GIS).

The data, however, is low resolution and can be off by a couple of centimeters. While that may sound reasonably accurate, O’Brien believed more precise, comprehensive topographic mapping was critical for golfers’ success on the flattest parts of the greens, where the game is often won or lost. By design, these surfaces are never completely level; there is always some slope and curvature.

To achieve below-par scores on these surfaces, golfers need to marry sound judgment and skill with an intimate understanding of the green. Players have to adjust their shots for how a green’s shape deflects the ball. These factors make it difficult for them to aim and pace their putts precisely when playing at a new or redesigned course. After all, green gradients, typically of 1 to 5%, and long-radius curvatures are almost impossible to see.

It’s not surprising that professionals who only have a few days to practice before a tournament have come to rely on Tour Sherpa’s greens contour books for the information they need. When the pros and their caddies understand the lay of the land, they can determine how to make the ball roll on the correct line at the ideal pace. 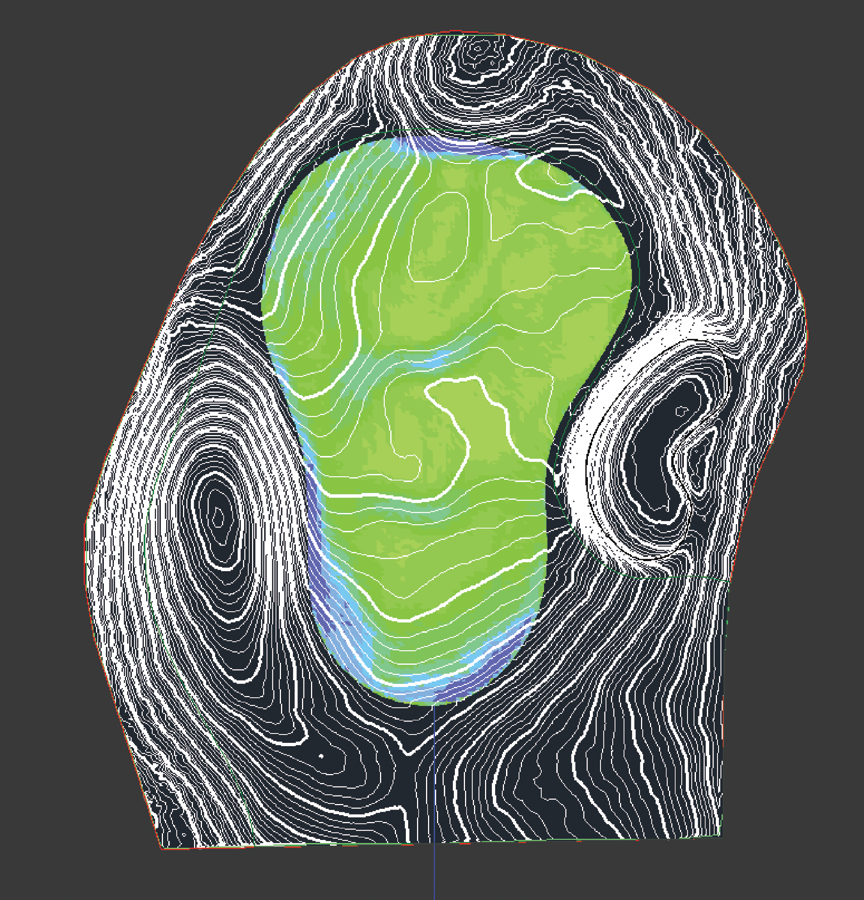 To provide more detailed data on the greens, in 2009, O’Brien started using a Leica ScanStation 2. This instrument captured up to 30,000 points per second and delivered survey-grade accuracy. It quickly and thoroughly recorded landscape details by methodically sweeping a laser beam over the area and computing the distance between the scanner and the objects the laser detects.

The three-dimensional data it captured was as comprehensive as that of a high-definition panoramic photograph. The point cloud that a laser scanner produced included a precise position for each of the data points representing the topography of the golfing landscape. Finally, O’Brien was able to capture the subtle shapes of the greens fully.

Another benefit of using the laser scanner was the protection of the greens. When working with GPS, technicians have to walk back and forth across the greens with a range pole and take measurements at points one to four feet apart on the green. With laser scanning, the technician can capture information remotely, so it’s unnecessary to step on the green.

“The golf course is the most intensively managed landscape on the surface of the Earth,” says O’Brien. “The grass is precision maintained. Saving on the wear and tear was a big plus.”

In 2014, when O’Brien scanned and modeled the greens of Pinehurst No. 2, he upgraded to the Leica ScanStation P20 (the newest version is the P30/P40) through the Leica Geosystems rental program, which enabled him to demo the equipment thoroughly. He felt confident using the new technology because a regional manager met him at the golf course to review the system. Also, whenever he needed assistance during the project, phone support was available.

O’Brien chose this scanner and related software for several reasons. The scanner records one million points per second and uses precisely located, stable ground control targets. These are essential for producing survey-grade georeferenced data. Also, he knew that the data-processing workflow of Leica Cyclone point cloud software would save hours back in the office.

He also had to consider environmental factors. First, he had to sandwich his scanning work between the daily golf play and the dawn sprinklers. That meant he was working at night, in the dark. The P20’s onboard display, which made it easy for him to check and adjust the equipment, made nighttime operation easy.

Also, the scanner’s ability to produce rapid global scans allowed him to find his targets without setting up lights. Additionally, he had to deal with the threat of rain and, perhaps, a surprise attack from the sprinklers. Because the P20 has an IP54 rating for water resistance, he didn’t have to worry about potential damage.

O’Brien was able to document the venue on his own. It took him just 15 minutes to set up and scan each viewpoint. Not only was he more than twice as productive as he had been with the previous equipment he had used, but he was also able to collect more data on each green. He surveyed one green at a time, scanning it from all sides to capture the putting surface and the surrounding environment—the bunkers, trees, vegetation, bleachers and any other manmade structures.

“As a designer,” says O’Brien, “I’m interested in all the features of the landscape, not just the topography. That’s why high-definition data is useful. I’m scanning so densely that we’re not just talking measurements anymore. The scanner is also capturing the imagery and the texture of the environment—expressions of the design intent, agronomic management, and the player experience.”

The point clouds he produced averaged 60 million points. O’Brien filtered and reduced the data into a 3D model, which he used to develop the CAD drawings for Tour Sherpa’s greens contour books.

Professional golfers agree. Golfers tested the books by watching how the ball rolls on the greens. After all, that’s a key insight they want from the books—which way and how much the ball will break.

Even though they may be unaware of the technology used to create the greens contours books, many have said that those they used at the 2014 U.S. Open were the best. Because the Tour Sherpa yardage books make them aware of every undulation in the green, they can aim and stroke their putt more confidently.

See xyHt’s website for a related story on a golf simulator app developed with point clouds.