Editor’s note: In many ways, we are all participants in a grand scientific endeavor that’s on the cusp of helping humankind prepare for some of the most destructive natural hazards–earthquakes and volcanic eruptions. The fields of seismology, geodesy, and surveying have realigned in pursuit of much-sought-after early-warning capabilities. The same infrastructure that comprises the active component of the geodetic reference frameworks we use is contributing to these essential plate tectonics and volcanic studies.

Resources include continuously operating GNSS (GPS plus other navigation satellite systems) networks like the CORS of the National Geodetic Survey, scientific networks like the 1,100+ station array of the Plate Boundary Observatory, and numerous other public and private real-time networks (RTN). All are feeding observations to scientists from more than 10,000 stations in the U.S. alone and many more worldwide round-the-clock–every second.

Scientific agencies and academia have recently collaborated to implement early warning systems, using arrays of large-motion sensors (seismic), strain gauges, and other sensors. Science, industry, and geospatial professionals realizing benefits from such infrastructure have greatly enhanced the rate at which networks of sensors have been deployed and their data incorporated.

This is the first installment in a new series to introduce you to the personalities and activities of the dedicated folks in the scientific and technical community who are employing all manner of surveying and geodesy methods and systems in support of these crucial initiatives.

Ken Hudnut, science advisor for risk reduction at the U.S. Geological Survey (USGS), is responsible “for getting a very broad range of USGS science used for societally relevant applications,” he says.

He used to conduct research and development with real-time GPS within USGS’s earthquake program, one of several programs in the agency’s Natural Hazards Mission Area. That office is also responsible for hazards from volcanoes and landslides and shares responsibilities with other agencies for coastal and flooding hazards. USGS uses GNSS for hazards response in many ways, Hudnut says.

“These are also areas where surveying and the interface with geodesy is incredibly important: things like observing the spatial variations in sea level change along the coastlines. It is not a simple matter of using the satellite altimetry and, say, tide gauges along the coasts and leveling and continuous GPS. That’s actually a complex set of observations that need to be rigorously combined.”

Hudnut says, “There is no simple final and correct answer.”

Along the West Coast, active plate boundaries range from a predominantly transform strike-slip boundary along the San Andreas fault system–where most of the movement is lateral, but some of it is vertical–to a convergent plate boundary in the Pacific Northwest that exhibits significant vertical deformation, Hudnut explains. Megathrust earthquakes display behaviors that are intriguing for research scientists but also have serious practical repercussions.

For example, changes in the depths of shoals and breakwaters can pose a hazard to coastal navigation. This was the case for Port Blair in the 2004 Sumatra Andaman earthquake and for coastal villages in the 2011 Tohoku earthquake.

In some cases, as revealed by records from tide gauges and continuously operating GPS stations, the subsidence of the coastline at the time of the earthquake reverses months later. A fishing village that had subsided in the Sumatra Andaman earthquake rose by more than 2.5 m in the subsequent Nias-Simeulue earthquake, making its whole bay and dock go dry.

These reversals can go on for months or even years, Hudnut explains.

“Sometimes, we see entire coastal areas submerged, like the ‘ghost forest‘ near Copalis, Washington along the Pacific Northwest coast. That can be recorded in the tree ring data and in estuary sediments.”

A station built by the Caltech Tectonics Observatory collected continuous GPS data during the Nias-Simeulue earthquake. This data is very important for coastal communities, especially for such economic drivers as ports and fisheries who need to know what to expect.

“For example, we may know, from the continuous GPS data from between the times of earthquakes, which parts of the plate interface are locked and accumulating strain and which parts are slipping, creeping all the time,” says Hudnut. “From that, we can construct a model of how a future earthquake that ruptures this part of the plate interface would either cause uplift or submergence at certain coastal locations and what might occur afterwards.”

Right after the 1994 Northridge earthquake in California, it became vital to understand its vertical deformation field because it directly affected all gravity-fed water systems, such as aqueducts, storm drain flood control systems, and sewage lines. Where did the land move up and where did it move down?

“It may take months to re-establish vertical control by leveling, so water-system operators need to know as much as possible through the continuous GPS data right away,” says Hudnut, “and then through satellite imagery within the following days, weeks, and months, to get as complete a picture as possible of the vertical component of the deformation field.”

The Northridge earthquake also involved “one of the very first real-world uses of our GPS data,” Hudnut recalls.

“We only had a few continuous GPS stations in southern California at the time, but we also had survey-mode GPS points around the area that had the earthquake. So, we set up GPS equipment over these survey points, made observations, brought the data back, did the processing, and then did the modeling.

“Within one week we had that map view of the vertical deformation field and we had a model for the fault rupture. That was very useful to the water system operators.”

Very fortunately in that case, the effect of the earthquake was to push the ground surface up into a dome-shaped uplift, improving water flow across the San Fernando Valley, which is a big flat area.

The geodesy community, people doing tectonic studies, and surveying organizations have a long history of working together, says Hudnut. That long history was helped by the advent of GPS technology, he recalls, because the surveyors had a need to merge their geodetic control networks but GPS receivers were very expensive, while the community that was using geodesy to study tectonics could get funding, especially from the National Science Foundation, to purchase them.

Around that time, UNAVCO was formed, and in Southern California a group of university investigators were also pursuing getting funding from NSF and from USGS to do increasingly ambitious surveying projects. “So, we had this tremendous kind of win-win situation develop in those days. There was this high level of scientific interest and a high level of interest from the surveying community.”

Prior to GPS, Hudnut recalls, each county would do its own adjustment for horizontal control, and periodically they would do very ambitious large-scale joint re-leveling projects across Southern California. However, there was a great deal of horizontal tectonic motion, and just enough tectonic vertical movement that it was complicated. In addition, there was non-tectonic movement, e.g., land subsidence associated with water withdrawal.

When GPS came along, it was seen as a way to help create horizontal control and to augment leveling on the vertical control, though the vertical errors made the latter less valuable.

“The combination of all those factors helped to bring together the land surveying community and the scientific geodesy community studying earthquake plate tectonic deformation back in those days, especially the early 1990s,” Hudnut recalls.

“After the Northridge earthquake, people saw the real practical value of the measurements we were making. That also accelerated the push to build out the network of continuous GPS stations, which was a big group effort and really involved the land surveying community working with the scientific community.”

GNSS Must Be Sustained

After the initial excitement of building the network, however, came the challenges of operating it and maintaining it. “That’s kind of the phase we’re in now,” says Hudnut. Equipment becomes outdated and needs to be replaced, solar panels need to be cleaned, and improvements need to be made, such as streaming the data continuously from many of the stations, rather than collecting it and periodically retrieving it.

“While the scientific funding for these stations starts to dry up, their research value remains high, and their value for the land surveying community, as anchors of the geodetic control, increases.

“The continuous GNSS stations are extremely important both for science and for land surveying purposes,” says Hudnut.

As memory of big disasters recedes, support for this infrastructure erodes. “But when the big event happens,” Hudnut says, “people are reminded of it. That’s when you need it.” In the large 2015 earthquake in Nepal, all the survey points moved and geodetic control had to be re-established, Hudnut recalls.

“That’s what we call geodetic infrastructure, and it needs to be restored after big earthquakes.”

“The global challenges to geodesy also include the observation of ice and mass balance changes in Greenland and Antarctica,” says Hudnut. “A lot of this is being addressed by continuous GNSS data, but also by differential imagery, such as InSAR and differential lidar.

“There’s a crossover occurring into geodesy with repeat past imagery. Often, continuous GNSS stations are used to pin together stacks of InSAR interferograms, for example. Some of these changes, such as with the ice sheets, are very rapid, and some are not so rapid and yet extremely important.”

Hudnut wonders “What is the vulnerability of the Port of L.A. and Long Beach, which is a very important port for the economy of California and the nation? What is the rate of land subsidence relative to sea level change, and what is the accurate forecast for the next 50 or 100 years? These are pressing questions for the cities of Los Angeles and Long Beach, which have significant coastal infrastructure at risk in that Port area.

“Where there will be a need for infrastructure changes through an engineering approach, those will be expensive fixes,” Hudnut points out.

“How do we work together between scientists, engineers, and land surveyors, to address those big challenges?”

Hudnut leaves us with a parting challenge–one in which surveying professional associations might consider joining the dialogue.

“How do we work with our elected officials at the city, county, state, and federal level to help anticipate things that could go wrong and impact our infrastructure that we all rely upon, and that challenge of continuing to communicate with the public about the importance of continuing to make these observations?” 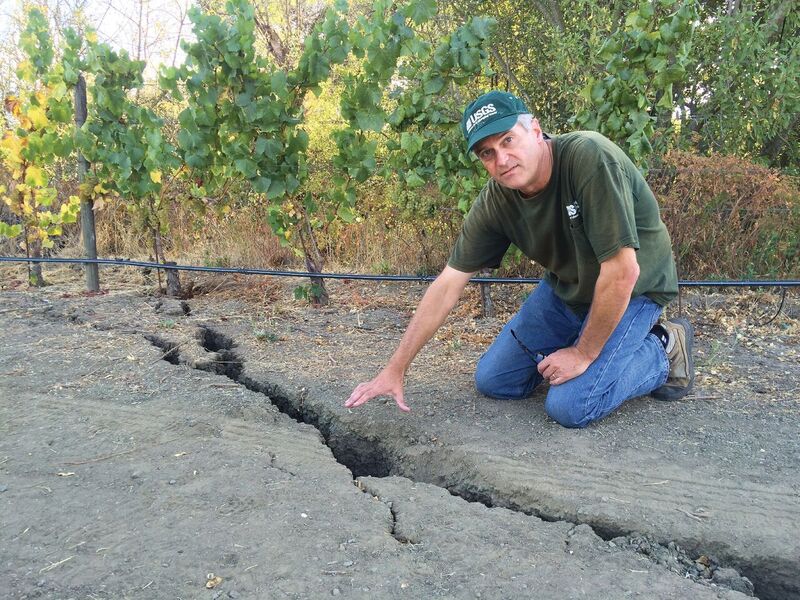 “Shifting Ground: USGS on Earth Movement after an Earthquake” Comments