From cadastral to precision agriculture to humanitarian aid, UAS are making a big difference while mapping Rwanda.

(Above: Course participants examine an orthomosaic in Pix4Dmapper during software training.)

After Rwanda made waves in the news early last year for allegedly being the first country to approve drone delivery, people payed attention. The country, with its rolling hills and one of the fastest growing economies in Central Africa, has already established regulations regarding drones and become a vanguard of sorts for the region.

“My impression is that there is a huge market in Africa at the moment,” said Francesco Nex, assistant professor at the ITC Faculty, University of Twente. “UAV use is growing very fast, as there is a shortage of surveying and maps available.”

Nex recently taught photogrammetry for an applied drone mapping training at INES-Ruhengeri Institute in Rwanda, along with his colleagues Rohan Bennett (an xyHt “40 under 40” in 2016–nominate for 2018 here!)) and Anton Vrieling. The Netherlands annually sponsors such continued education for former students of Dutch institutes, and for 2016 the University of Twente organized a course in Rwanda on the latest drone mapping techniques.

“They were very, very, enthusiastic,” Nex said of the 196 applicants, from which they selected 20 students from Rwanda and eight neighboring countries. “Most of them asked me very specific questions for specific problems. They really knew what they were looking for and had big expectations for this course and the use of drones.”

While there are still legitimate concerns in many parts of Africa that UAVs are associated with, even indistinguishable from, weaponized drones in conflict areas, the flying robots remain immensely practical.

They are small and cheap in comparison to other data-acquisition or transport methods and have the ability to quickly provide images of changing areas. Compared to satellite images, drone images have a much higher resolution and are able to be captured beneath the cloud line. Humanitarian organizations, nonprofit, and for-profit companies continue to test their potential uses.

He notes that the potential use for drones is “overwhelming.” The ability to map a crop using multispectral images to better understand its quality has potential to expand the practice of precision agriculture. Gerald Forkuor, lead remote-sensing scientist for Rwandan climate service center (WASCAL) and training attendee, explained that the predominance of subsistence farming in the region means small field sizes, which require cheap and efficient imaging systems to capture their data.

In addition, “Persistent cloud cover prevents optical sensors from acquiring cloud-free images during the main cropping season,” said Forkuor. “Knowledge of how UAVs can support in reducing such effects is very necessary.”

WASCAL is moving forward in purchasing a drone this year, something they have not yet been able to do. 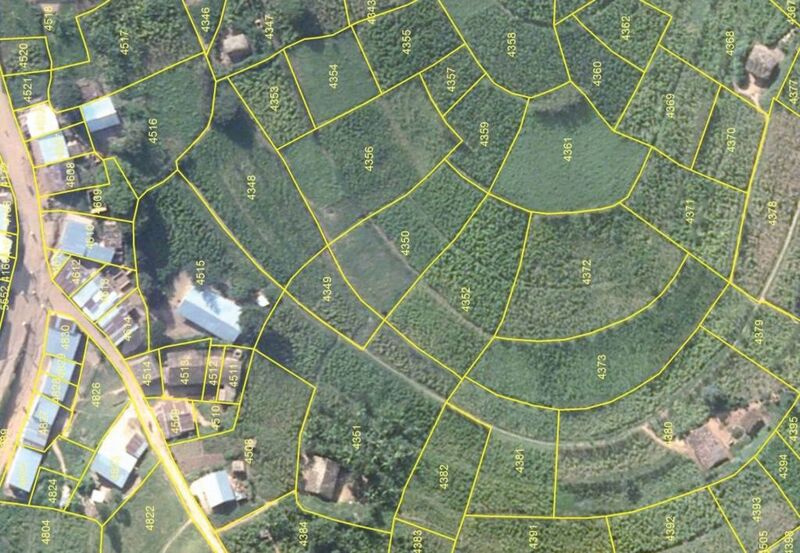 Example of cadastral work by INES-Ruhengeri (not done during training)

Leonard Sweta, training attendee and GIS analyst at the Centre for Mapping of Resources for Development in Kenya, stated that learning how to create 3D models and calculate vegetation indices in Pix4Dmapper were the most valuable part of the training. He aims to derive new techniques in land innovation and agriculture from the skills he learned.

Mapping applications in land administration were also a focus of the training. In an article for The Guardian, researcher Janina Mera of the Land Alliance nonprofit contests that secure property rights are the bedrock of property development; yet, many communities lack the information and documentation required to access those rights.

“The idea was to explain how to use UAV images to update maps, for cadastral,” said Nex. “Most of the country has cadastral maps that are very out of date–from flights done sometimes over 20 years ago.”

“In Rwanda, we used aerial images to register land,” said Biraro. “But those images were captured using a plane. The UAV can be a potential tool to acquire new imagery to update the existing.”

In addition to using drone imagery and maps for cadastral purposes, drones are increasingly being used in countries like Niger, Burkina Faso, and Uganda to help map displaced persons in face of conflict.

“There are also big informal settlements,” says Nex. “This means there are large areas where you just don’t know what’s going on.”

In places that have access to mapping agencies with aircraft in the region, often sensors are not included and need to be rented, creating an impractical and expensive solution. Drone maps can help organizations or companies to visualize and identify needs in refugee sites, like water, latrines, and health stations. They can also aid in the monitoring camp growth, movement, and registration of the displaced. 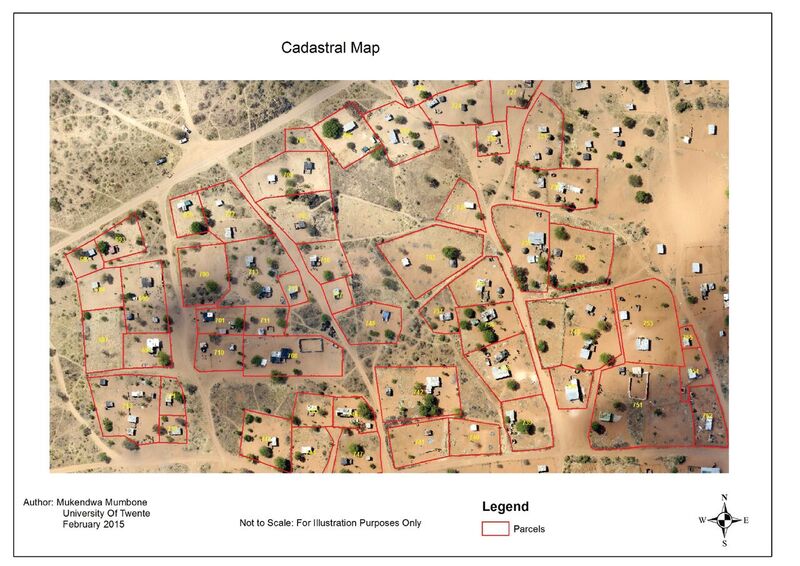 Sample of cadaster work done in Namibia, drawn on a Pix4D orthomosaic with resolution of less than 5 cm.

As in Rwanda, drones are beginning to be recognized around the world as a powerful surveying solution. Accessible in terms of price and availability, their sensors quickly capture data that can be turned into valuable topographical and agricultural information. While Rwanda, South Africa, and Mauritius have more favorable drone regulations, there remains an absence of supportive laws in many African countries. Morocco, Kenya, Uganda, and Ghana have either banned or hindered drone operations, keeping them from their share of profit in a multi-billion dollar industry.

Regional leaders like Gerald Forkuor, Leonard Sweta, and Mireille Biraro use their professional expertise to advocate drone mapping in their spheres: democratizing data collection and using this technological opportunity to better the environment around them. Eyes are on Rwanda as it uses, and spreads knowledge of, drone photogrammetry solutions. 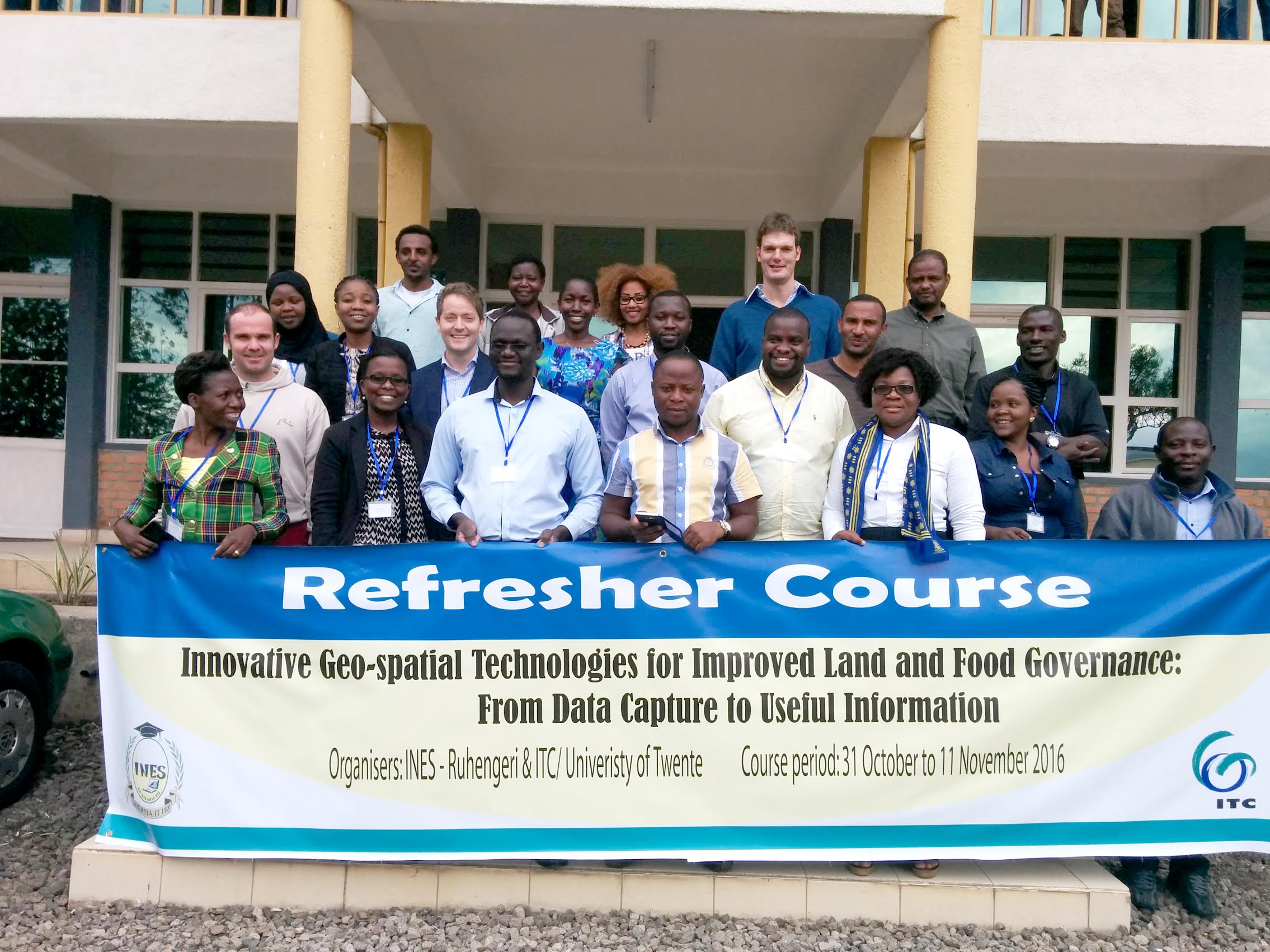 Drone training attendees and teachers at INES-Ruhengeri Institute in Rwanda.