1998: The Public Unveiling of 3D Scanning

In my prior “insider” articles for this series (monthly, starting with the June 2020 issue), I described how in 1996 I became aware of 3D laser scanning while the technology was in development. In March 1998, I left a senior product marketing position with Trimble to join the new technology’s startup company, Cyra Technologies, as employee No. 20. In this article, I give a behind-the-scenes look into that first year – 1998 – the product launch year.

All four of Cyra’s beta customers had signed off on their laser scanners and software, and Cyra was ready to sell systems to the broader market. In my new role at Cyra as director of AEC markets, my first marketing promotion task was to prepare a formal public product announcement and launch the newly named “Cyrax 2400” 3D laser scanner and CGP software.

Athough Cyra’s CEO, Ben Kacyra, had big ambitions, he was realistic about the bandwidth of Cyra’s small team to support new customers who could well require a high level of support. As such, Cyra’s policy was to initially focus only on prospects in North America. If an organization outside of North America wanted to buy a system, Cyra would sell them one, but they would be on their own for support.

Ironically, the first order for a new Cyrax 2400 system was by the University of Ferrara, Italy. Even more ironically, after it was shipped from Cyra’s office in Oakland, California, it was literally lost in transit for over a year.

It was an omen for what was going to be a rough start to this coming-out party.

My marketing preparations for the first public product launch included developing proper specs, data sheets, and a press release. Preparations also included identifying a suitable trade show to announce and demonstrate the product. (Remember, this was 1998 – before the Internet, email, webinars, etc. were ubiquitous).

The targeted trade show for launch was the AEC Systems show, June 3-5, at Chicago’s McCormick Place exhibit hall. Our small team at Cyra was filled with nervous excitement and anticipation.

The AEC Systems show no longer exists, but in its day, it was the premier trade show for the rapidly growing CAD industry. Leading exhibitors included Autodesk, Bentley, and Intergraph, among others. 3D was just coming into its own for certain CAD applications. Plotter vendors were there in force.

Advances in computers and workstations were also big news at this annual show. And, of course, it was focused on the AEC market – architecture, engineering, and construction – for which Cyra’s 3D laser scanning technology was specifically developed. Our goals for the show were to secure good sales prospects and get a buzz going about this new 3D laser scanning technology.

This was a new and very different technology, so we decided to focus messaging on its main applications and benefits, rather than on the technology itself. So, pre-show messaging cited “as-built and site surveys” with benefits of “up to 80 percent” cost savings, better “accuracy and completeness,” and “faster time to 3D deliverables.” The idea was to connect with attendees whose organizations were involved in measuring and modeling complex structures. Once that connection was made, our next objective was to get attendees to see a live demo at the booth. 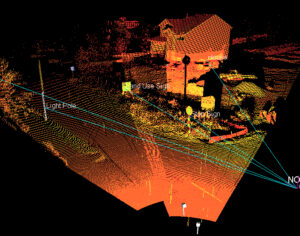 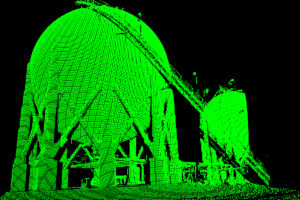 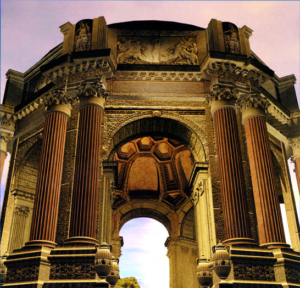 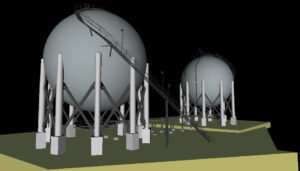 Above: These images were used as graphics at the Cyra trade show booth to demonstrate Cyrax 3D laser scanning applications. The elaborate San Francisco Palace of Fine Arts image was developed by Academy of Art students by texture mapping Cyrax 2400 laser scan data. The other images show a residential site survey and storage tanks at a Chevron facility.

A Thud … with a Silver Lining

We were anticipating our launch to be THE big buzz of the AEC Systems show, but it wasn’t. Show logistics played a big, bad role.

Our 10-foot-by-20-foot standard booth was located at the rear of the exhibit area. The show’s biggest exhibitors each had huge, glitzy booths right near the show’s only entrance. Moreover, they all featured staff talking on headset mics about the latest and greatest advances in their already industry-leading CAD products. The big vendors were all trying to “out-loud” and “out-sparkle” each other and attendees lapped it up.

Few attendees wandered by our booth and most of those who did weren’t good candidates for what we were promoting.

However, all was not lost. In addition to a couple of good industrial plant industry visitors who understood what we were promoting and the potential value of it, the AEC Show Review in the August 1998 issue of Bentley’s popular MicroStation Manager magazine cited Cyrax as one of two “stand out” booths among 350 exhibitors. ENR also included a positive mention of it in an August 1998 issue.

Shortly after the AEC Show, we exhibited at SIGGRAPH in Anaheim, California, the computer graphics industry’s largest annual show. In its review of the 1998 SIGGRAPH Show, the September 1998 issue of Real Time Graphics magazine highlighted Cyrax as “dwarfing the competition.” That reference was to Cyrax’s breakthrough long-range (100 meter) scanning capabilities compared to the typical sub-meter range of bench-top scanners commonly used to 3D scan (digitize) toy figurines for the movie/CG industry.

Those very positive reviews by leading trade publication editors were a harbinger of many more to come.

In the September 1998 issue of MIT Tech Talk, a one-page feature article described MIT’s role (MIT developed the scanner’s microchip laser) in receiving the very prestigious celled at evangelizing new technology – GPS – to the survey market in the 1980s and 1990s. As GPS technology became more mainstream, the excitement of evangelizing GPS was wearing off.

The main tool for selling Cyra’s 3D laser scanning products were in-person demos. As a seminar room, trade show ceiling, or facility was being scanned, with visible green laser dots rapidly sweeping over the scene, scan points were displayed in real-time on a computer monitor or projection screen. When the scan image steadily built up and the scanned scene became recognizable, the operator moved – and flew around – the scan image in 3D. And that was it – the jaw dropper. Never failed.

After scanning, the operator then immediately took measurements between scanned points and quickly modeled a few elements of the scene. There was simply nothing like seeing that whole demo for the first time … or seeing it again and again. It was always amazing.

The rest of the demo presentation was converting the point cloud into more CAD objects, meshes, etc. for export to CAD and addressing a ton of questions.

Virtually no one was going to buy a system without a first-hand demo and our marketing and sales targets soon included doing a certain number of demos each quarter.

Demos were primarily via seminars and trade shows. We also invited prospective customers to Cyra’s office in Oakland, Califofrnia, for demos. Until new dealers got up to speed to do demos on their own, all demos were done by Cyra’s application engineers while a salesperson, rep or dealer talked about the system and demo.

Every demo (and customer shipment) was a hold-your-breath event. Because of its weight (more than 100 pounds) and the system’s sensitive optics alignment and internal calibration, there was always a risk of a Cyrax 2400 system not working properly after shipment.

Nevertheless, in the summer of 1998, after the AEC show and SIGGRAPH Show, Cyra, in conjunction with regional dealers or other partners, organized seminars in a dozen U.S. cities. Demos were also done at well-qualified, prospective clients’ offices or facilities. 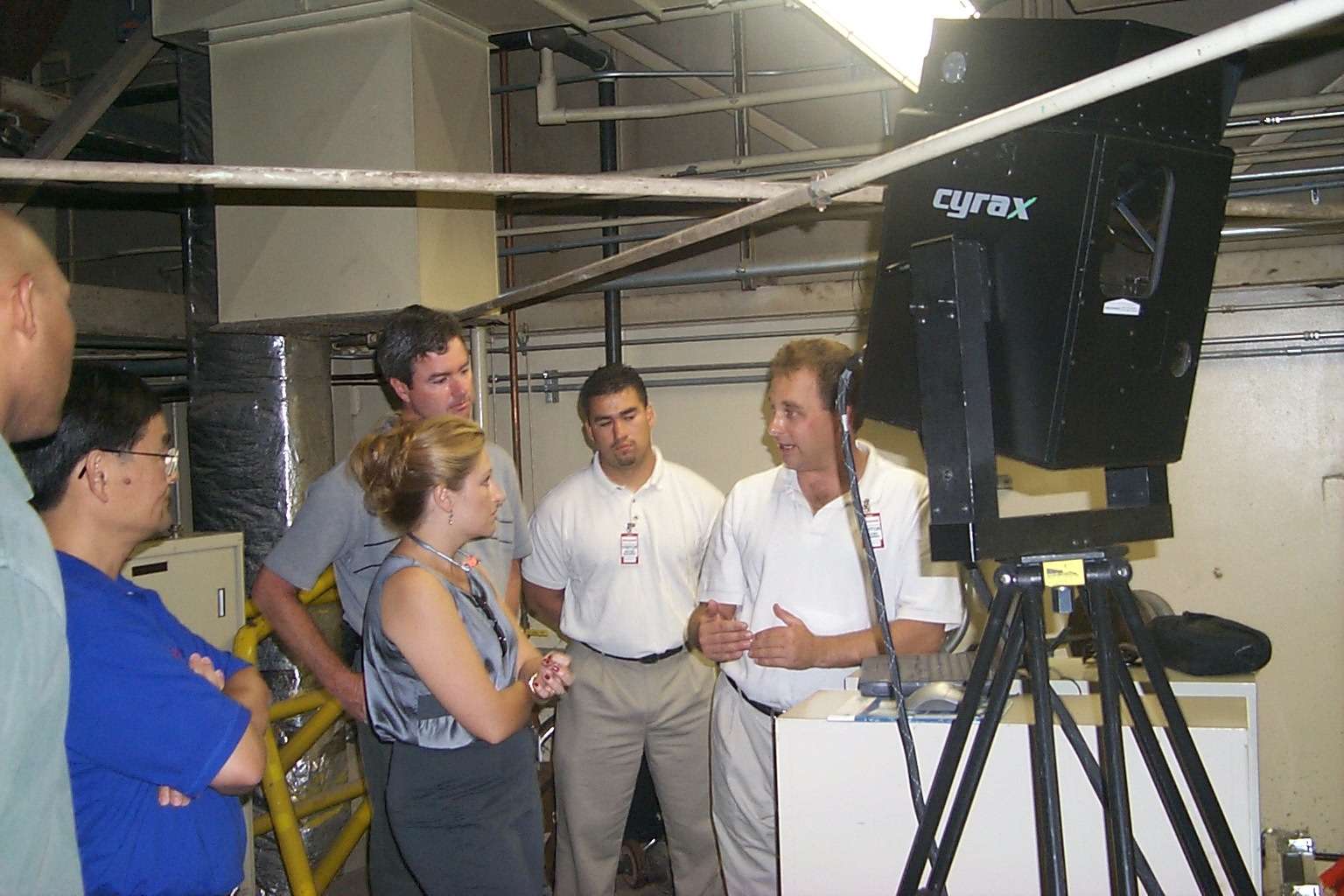 In my October 2020 “Early Days of 3D Scanning” article, I described my first day at Cyra when we learned about a new laser scanner from KT that scanned 100 times faster than Cyra’s scanner. I described how I worried that joining Cyra had possibly been a catastrophic career move.

I’ll describe a fuller picture of early 3D laser scanning products competition (including Mensi and Riegl) in my next article, but I’ll address KT here. It turned out that while the new competing laser scanner was, indeed, 100 times faster, there were other issues associated with it. Most problematic was its laser eye-safety rating. A user had to deploy rigorous, logistical site constraints to ensure no one was able to get within a certain, wide range of it and/or had to wear laser safety glasses – a showstopper for many prospects.

Another challenge was processing the scan data. Early KT architectural projects involved students (from Carnegie Mellon University, where the technology had been developed via their robotics research program) turning the point clouds into 2D drawings. KT systems weren’t proving to be economically or logistically viable for those applications.

The challenge of selling their systems was so great that, after about one year, KT literally changed its business model to a “services-only” business under the name of Quantapoint. That had an interesting impact. KT’s special “phase-based laser” supplier was via Zoller + Froehlich (Z+F), a family-owned German company.

Dr. Christoph Froehlich had developed the ultra-high-speed laser for his PhD work at the Technical University of Munich. Without a laser scanner vendor to sell his specialty laser to, Froehlich ultimately decided to develop his own laser scanner; Z+F continues to be a 3D laser scanner industry mainstay to this day.

Creating Buzz is one Thing … Creating Sales is Another

It turned out to be a lot more difficult to sell Cyrax systems than hoped for that first year. Numerous factors contributed to that, including a big market education hurdle, its $173k price tag, the system’s hefty size and weight, working in 3D software to process point clouds, and a lack of referenceable user projects.

Less than 10 new systems were sold against a target of 20 system sales. Some went to universities, which are great candidates to take advantage of leading-edge innovations for research purposes. In addition to the University of Ferrara, systems were also sold to Stanford University and Tokyo University. A couple were sold to service providers who had specific industrial clients, and a first sale to a dealer in Texas was made. Beta systems for all four beta organizations were also all converted to formal system sales.

While actual system sales were initially disappointing, things were starting to percolate. There was a lot of “tire kicking” going on. Early beta users were deploying their Cyrax 2400 systems on major projects and the technology was, indeed, getting increasingly strong buzz in the market.

Word was spreading fast and a cadre of early adapters were checking it out. The next year, 1999, would prove to be pivotal for Cyra and 3D laser scanning, in general.

In my next article, 1999 proves anxious, but winds up big.