This entry is part 13 of 13 in the series GeoDude

In multiple ways, 1999 turned out to be a pivotal year for Cyra Technologies and for 3D laser scanning, in general. First, it gained broader exposure in the market. Second, there was an uptick in system sales and usage. Third, there was important activity for Cyra in the area of connecting with major, potential strategic partners to help take the technology to the next level.

In this article, I dive into the first two aspects – additional exposure and an uptick in sales and use of the technology… but with a major new problem.

In my November 2020 article in this series (monthly, starting with the June 2020 issue), I described that first year – 1998 – that I joined Cyra Technologies, a small, California start-up pioneering 3D laser scanning. That year, Cyra launched 3D laser scanning into the general market. I was the lead marketing person for the launch.

But 1998 did not see the level of sales that Cyra had planned for – we sold less than 10 Cyrax systems against a target of 20 for the year, and most of those went to Cyra’s four beta customers who were already onboard. Our new competitors at the time – Riegl, Mensi, and K²T – were likewise not setting the market on fire.

There were various reasons for the lackluster start. The market education task was proving to be formidable. “3D” back then was a scary and often unwelcome term. Systems were expensive and efficiency (field and office) was simply not compelling except for extreme applications. Even in extreme cases, the financial benefits for a single project were likely not enough to justify purchasing a full Cyrax system … and there were no service providers back then.

Another factor limiting sales was that all four vendors of 3D laser scanners and software, including Cyra, were small companies without established reputations in 3D scanning. There was also a lack of sorely needed reference projects, where the technology had been successfully used for a real, commercial project – not just a demo, trial, or feasibility study.

This lack of real projects where the technology had proven to be commercially successful posed a significant challenge for marketing Cyrax systems, especially into Cyra’s target industrial plant retrofit market, for which Cyra’s technology had been specifically developed.

Plant retrofits were notorious for large cost and schedule overruns, often traceable to poor as-builts that had been collected manually. That made plant retrofit as-builts an ideal target for promoting 3D laser scanning. As one senior plant construction project manager told me, “Plant retrofit projects are known as CEO’s – Career Ending Opportunities.” Project managers avoided them if they could.

The problem we had was that a complete start-to-finish plant retrofit project can take a couple of years or even longer. No such reference projects yet existed; that would take time.

Unfortunately, “time” is the unfriendly enemy of start-ups, as they burn through cash awaiting sales to ramp up … and initial sales were slow. In my lead marketing role, without a start-to-finish plant retrofit reference project, I went on a search for any project that had already demonstrated true commercial benefits. I also wanted and needed one that, hopefully, we could get some good public exposure for.

With slow initial sales and no references for a start-to-finish plant retrofit, I pressed Cyra’s CEO, Ben Kacyra, on where the technology had been used on any projects that were commercially successful. Kacyra pointed to one – and only one. Of all places, it had been successfully commercially used in making a recent feature film, a sci-fi movie called Starship Troopers.

A nearby (Oakland, California) aerial photogrammetry mapping company, Hammon, Jensen, Wallen and Associates (HJW) had used Cyra’s 3D scanning technology, with Cyra’s help, to capture and create a 3D wire-frame mesh of the detailed interior geometry of a 200-foot-long cave. The cave had been fabricated at Sony Pictures studios in Culver City, California, for the movie, which was released to theaters in 1997 and on video (yes, video!) in 1998.

HJW had originally estimated cost and schedule based on using close-range photogrammetry, which Tippett had specified. However, neither close-range photogrammetry’s cost (more than $100,000) nor its schedule (three months) were practical. Instead, HJW proposed using Cyrax, which they had seen a demo of while still in development. Using Cyrax, the project was done for $30,000 in less than two weeks, requiring only three days on set. Moreover, scanning’s higher point density provided a tighter 3D mesh, which gave the movie’s director greater creative freedom on set. (The movie was ultimately nominated for an Academy Award for Visual Effects; Cyra later also submitted for an Academy Award for its 3D laser scanning technology in another category.)

I broached the possibility of writing and placing an article about the project with both HJW and with the then-editor of Professional Surveyor (now xyHt) magazine, and in April 1999 a four-page article on the project, including plenty of good images, was featured on the front cover! Bingo!

As Kacyra later remarked to me, this put Cyra Technologies and 3D laser scanning “on the map.”

The First, but Not the Only

The April 1999 cover story was great exposure for the technology and Cyra. It was also a great reference for the use of 3D laser scanning to capture detailed 3D geometry of caves (or other irregular surfaces such as vertical rock faces) and of movie sets.

Soon afterwards, a feature article on the use of Cyrax 3D laser scanning also landed on the July 1999 front cover of another leading trade magazine – also on its use for capturing cave geometry. In that case, the subject was the Oregon Caves, a U.S. national monument, where the accurate 3D map of the caves would be used for ongoing management and preservation.

The potential use of 3D laser scanning to capture 3D detail of movie sets attracted another organization – Panavision (yes, the guys that make the “Filmed in Panavision” movie cameras) – to buy two Cyrax systems for that application and set up their own laser scanning services department, run by Alan Lasky. 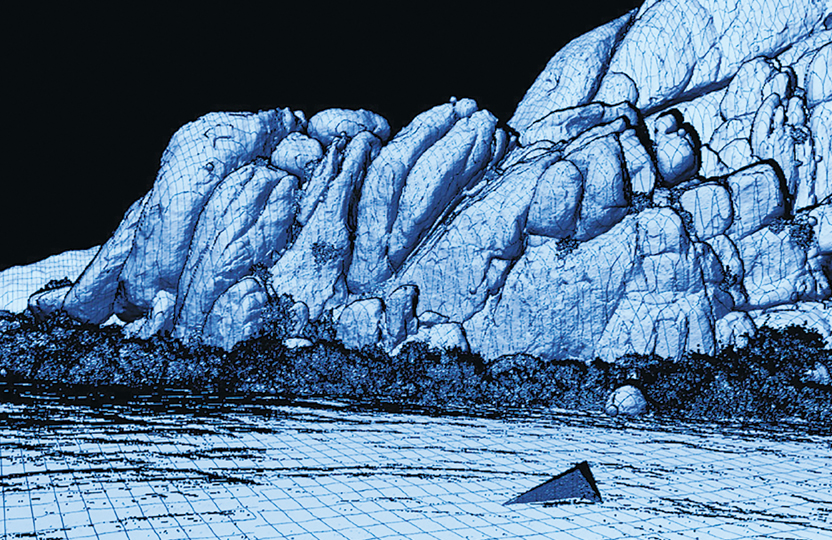 I was very excited about this sweet spot movie set application/market for our fledgling technology, hoping it would be a big market. However, my excitement bubble burst when Lasky estimated the total potential for selling laser scanners into that segment at only around 20 systems worldwide (then). Ugh.

Such is life in a start-up. You get your hopes up one day, then dashed the next.

After a dismally slow start to sales in 1998, sales picked up in 1999. By the end of 1999, Cyra sold an additional 40 Cyrax 2400 laser scanners, and accompanying CGP software. Sales were broadly divided among different types of customers in various locations.

Several dealers jumped in. Most of the first dealers to buy Cyrax 3D laser scanners were Trimble GPS dealers in the U.S. After successfully evangelizing GPS in the 1980s and 1990s, they saw 3D laser scanning as possibly “the next big thing” in surveying technology. Until there were viable service providers in their region, many early dealers also provided laser scanning services – often paid trials – to support specific project needs.

A few government agencies and universities also bought systems in 1999. One was the U.S. Office of Naval Intelligence (ONI). In 2000, ONI used its Cyrax 2400 to analyze the damage to the USS Cole after it was attacked in a Yemen harbor by Al-Qaeda. University recipients in 1999 included the University of West Virginia, Columbia University, and the University of Ferrara, Italy, which finally received a system after their initial system was lost in transit. Ferrara went on to become one of the most prolific and advanced users of the technology in its early years, paving the way for the technology’s extensive use in heritage applications.

Several systems also went to survey/engineering firms and specialty service providers. This group of customers was, in many ways, one of the most important for Cyra as their success with the technology would pave a big, broad path to future success with it. Some were pure survey firms, some civil/survey firms, some were AEC consulting engineering companies, and some became the industry’s first 3D laser scanning service providers.

As noted earlier, identifying and promoting good reference projects was critical for growing our business. So, I was regularly probing early users for potential reference projects that we could use to promote the technology. Likewise, we were eager to monitor how these new users were doing overall business-wise with their investment in the technology. Our great hope was that these early users would be very successful, and word of their success would lead to lots of new customers.

When I dug in to find out how things were going business-wise with these earliest users, I heard some stories of single project successes, but overall, what I most often heard was that there were not enough project successes to make a customer’s investment in the technology a winner. It was tough to hear, but it was fact.

There were several reasons for the business challenges that many of these first users were experiencing. There were reliability problems with the scanner. The cost and logistics of executing projects, from fieldwork to final deliverables, was simply unattractive for many candidate projects.

Working with the point clouds in CGP software required techs to be skilled at working in 3D and, back in 1999, that wasn’t the norm. Just the idea of “3D” scared off a lot of prospective users and service provider clients: “Sorry, but we don’t do 3D here.”

The initial investment – $173k just to acquire a system – was very high for many budgets. Plus, the costs of training, upgrading computers and data storage, etc. made things that much more difficult, financially. Finally, for service providers, the educational and marketing task was larger than anticipated.

Those early challenges for many users – and the large portion of users who were not financially successful – turned out to be the tip of an iceberg of what would be a long (years long), slow trudge before a majority of 3D laser scanner owners would become successful. Today, we take it for granted, but for a long time that was simply not the case.

To be sure, there were also some pockets of noteworthy successes and promising progress that kept our flames of hope and excitement burning. Jaako Poyry, a pulp and paper plant engineering company in Finland, was using it successfully for retrofit projects. Civil/survey firms found a good application in capturing vertical rock faces. Raytheon E&C/Washington Group International had an excellent power plant retrofit project underway. Panavision was having repeated success scanning movie sets. Mabat (Israel) was successfully applying the technology on projects with unique requirements. Mark Thomas was preparing to use it for scanning highways, without having to shut down traffic lanes. General Motors, via Arcadis Giffels, was evaluating it for automotive plant as-builts. Universities were using the technology for some high-profile heritage applications. Stanford, for example, was scanning several of Michelangelo’s works, including the Statue of David, for what would become the highly publicized “Digital Michelangelo” project.

These were reassuring nuggets of promise and progress that helped keep our faith  – and our funding – going in what we were doing.

In the next article: 1999 saw important events in the area of taking the technology to the next level of engagement by major industry players. Those events would dramatically shape the future of the technology and the industry.