South Surveying and Mapping Instrument Co., LTD. holds a substantial share in the largest single market for such products. Until recently, it was not well known in the Americas; a sleeping giant may be awakening.

Years ago, I started seeing South’s booths at trade shows like Intergeo and Conexpo, but in recent years I’ve begun to see more of their GNSS rovers and total stations in the field—in Europe, Australasia, Asia, Canada, and even now some in the U.S.

Image above: Product manager Marco Chan demonstrates new features on South’s latest model total stations. A new style of dual laser implementation may be the first in any total station.

When I had the opportunity to finally visit their HQ, my jaw dropped when I heard about how big their operations and reach are domestically—and growing internationally. A safe assumption is that an outfit does not get that big by selling substandard equipment; they must be doing something right. My visit revealed that this appears to be the case.

According to the numbers South provided, they appear to be doing well. One factory produces more than 35,000 total stations per year and another more than 20,000. GNSS units are produced at the HQ, around 45,000 per year. One factory makes more than 100,000 tripods annually and as many rods and range poles.

Marco Chan, product manager, said, “In terms of quantity, China owns the largest market worldwide. About 50%-60% demand in China is for low-end equipment and 30% for mid-end. For high-end, like robotic total stations for monitoring, 10%-20%, and that is from [overseas] manufacturers. There are some secondary brands from other overseas companies, but most of the rest is from other Chinese companies.”

A Student Seeking to Master

South Surveying and Mapping Technology Co., LTD. (South for short) was founded in 1989 in Guangzhou and has developed along with the modernization of engineering and geomatics in China. Although South rapidly grew into an innovator, essentially it began as an imitator; it is no secret in its early period it “mimicked” designs from others (yes, people might not be wrong in calling some early products “knock-offs”).

Chan, who served as HQ tour guide and interpreter, said that within South is a strong desire, even from the start, to develop their own instruments completely, but that it made sense to follow certain form factors in existing designs. He did note that, even in the “mimic” stage, the source code and much of the internal component design and configurations were their own.

Now, says Chan, all products are conceived, developed, and produced in-house, except for certain OEM components and partnering.

Geography as a strength

Early on, their founder acquired two large instrument-manufacturing factories: one in Beijing and another in Changzhou, Jiangsu province nearer to Shanghai. In the beginning, no one knew which team might succeed in developing their own total station. Fortunately, both teams did. Instead of trying to shoehorn the two operations into one, South developed a clever strategy of internal competition.

Chan said, “Each factory produces different products, like total stations. For the past 15 years they try to improve on each other, and this must be on quality, not price, so each factory must innovate and continually introduce new and improved products.”

Sheer volume has allowed South to keep their price point down and to keep a large engineering team working on new products and improvements. Chan says that they feel that South is usually a few years ahead of the other Chinese companies. I asked for examples.

Chan said that South has not offered robotic total stations, yet, and one reason is that there is little demand for robotics in domestic markets. Most domestic users prefer to operate their TS via the faceplate, something we’ve also seen in Europe. South also provides data controllers/mobile devices and field software.

To meet a strong demand for TS both domestically and overseas, South has created a large line of instruments in 1”, 2”, and 5” with ranges up to 2000m and focuses on features of mechanical TS that their users desire. For instance, they have one that runs with on-board Android and are releasing an auto-height feature in 2020.

In with the new

To demonstrate a new feature, Chan fired up an older model as well as their latest (N6 series); the former made the familiar “ticking” sound when measuring, the latter did not. Legacy TS have typically made lots of clicks and ticks, often from mechanical attenuation, which has limited the number of returns per second.

Chan said, “This one is our best seller; it is the first one using a dual laser. Measurement speeds are faster, with more signal and increased accuracy. This is coaxial: the same beam pulsing in the same axis. It is not the old EDM with one laser pushing out and a motor blocking, so the signal comes back.” Chan said that as far as they can tell, this is the first of this style of dual laser implementation on any TS.

In terms of optical and GNSS, South is firmly in the fourth wave of surveying and geospatial hardware and software. South is quite “wired”; they offer multiple data connectivity options and OSs, they shuck legacy designs (e.g. recently standardizing TS batteries and interfaces), and they have rapidly developed new products and features. While this is happening to some extent across the full range of geospatial manufacturers, South seems to be doing so with great gusto. 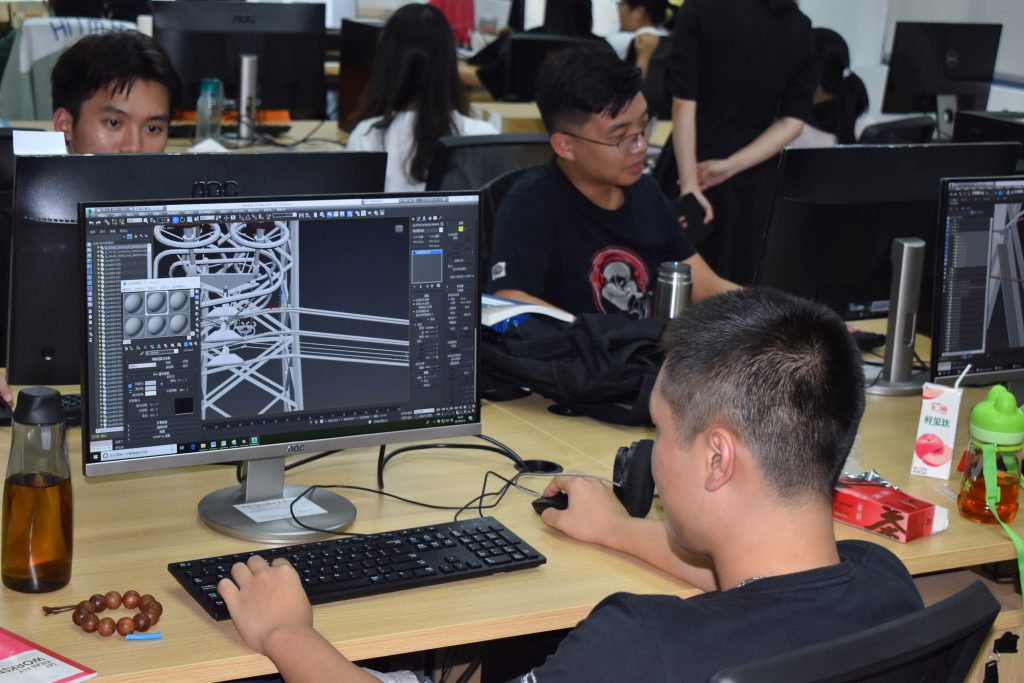 From OEM to Own

Hyman Huang is a product engineer in the GNSS team. He said that out of about 3,000 employees working in factories and branches, South has as many as 400 engineers in R&D and product engineering. Many, like him, are from GIS backgrounds, some from electronics, but almost as many are from geomatics, geodesy, and surveying backgrounds and education.

While South is known as an OEM integrator, Huang confirmed that they have developed their own GNSS boards and RTK engines that, for instance, have been integrated into their Galaxy 1C.

Some of their top-end models have either Trimble or NovAtel OEM components inside, with South niceties added. Recently, while visiting MicroSurvey’s HQ in Kelowna, Canada, to try out their new Android version of FieldGenius, I used a South Galaxy rover, and it performed as well as nearly any newer high-end rover.

South models with OEM as well as their own boards track and use GPS+GLN+GAL+BDS. Some have legacy tilt compensation, but they are about to launch their first model with an IMU that will support no-calibration tilt. Depending on what type of OEM board is inside, some models can also support real-time L-Band PPP (e.g. Veripos, TerraStar, OmniStar, Starfire, RTX, et al.).

I asked Huang why they don’t put their own board in their top-end models; the specs and capabilities certainly seem to be top-end. Huang said that it will take time for users to become more comfortable with new products; they are used to the OEM models. It might not be long before more models are running their own boards.

Huang made another observation about the adoption of GNSS technology: “[Perhaps in the urban canyon] of Shanghai, GNSS might not work so well, but in most places, you can do many types of work with it. With [multi-constellation and multi-signals], now more. When you can’t use GNSS, you have your total station.” Pairing an affordable GNSS rover with a good (under $4K) mechanical total station sounds pretty good for even small/medium firms.

South’s line of GNSS rovers looks to have many options, from low-cost, simple, static gear to asset mapping, top-end survey rovers. And most have the familiar bucket-on-a-pole form factor, in solid alloy housings and with IP67 ratings.

One interesting rover add-on for the G6 is the Insight V1 offset measurement solution. I remember all manner of built-in and peripheral lasers and cameras to do offset measurements, but South seems to have done a really good job of it, especially the workflow. It is a little IP67-rated streamlined camera on the pole; you operate it from their EGStar field software on a mobile device or phone. You take three photos, and they go to South’s cloud processing service and pick points to determine the offset on your mobile. 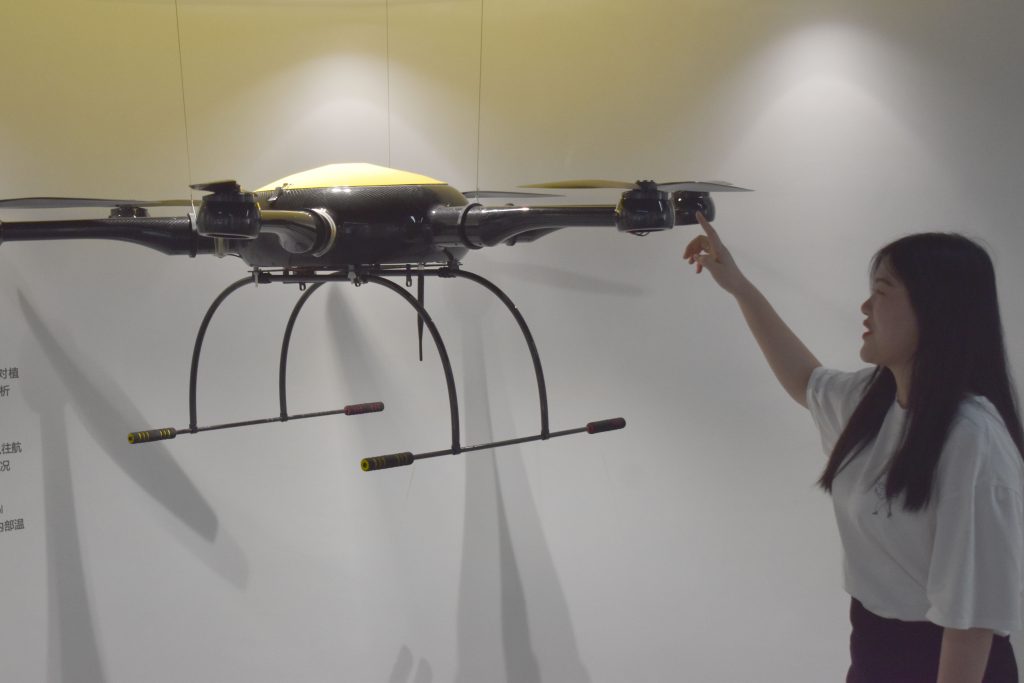 South has expanded beyond TS and GNSS; they have begun to produce their own (static) scanners, robot boats for single-beam hydro work, a rail measurement/monitoring platform, fixed wing/VTOL and rotor UAS, and mobile mapping systems. For the current mobile mapping systems, they are, for now, integrating Velodyne, Riegl, and other OEM components, but they continue their own R&D.

Jackie Cheung, product manager of the solutions group, talked about their approach to supporting customers with large and/or difficult projects. Customers, he explained, want to be productive immediately and cannot afford to lose time in integration.

Cheung said, “We do not want to take any work from customers, but if asked we can help complete projects, and we have so many examples and users’ experiences we can [apply].”

South has their own field and office software (like EGStar, for Android and Windows Mobile) that looks complete and can be run in English. Their office software is called South Geomatics Office. But, users in say, North America, might prefer to run the gear with MicroSurvey’s Field-Genius, Carlson SurvCE, or others that support applicable drivers. 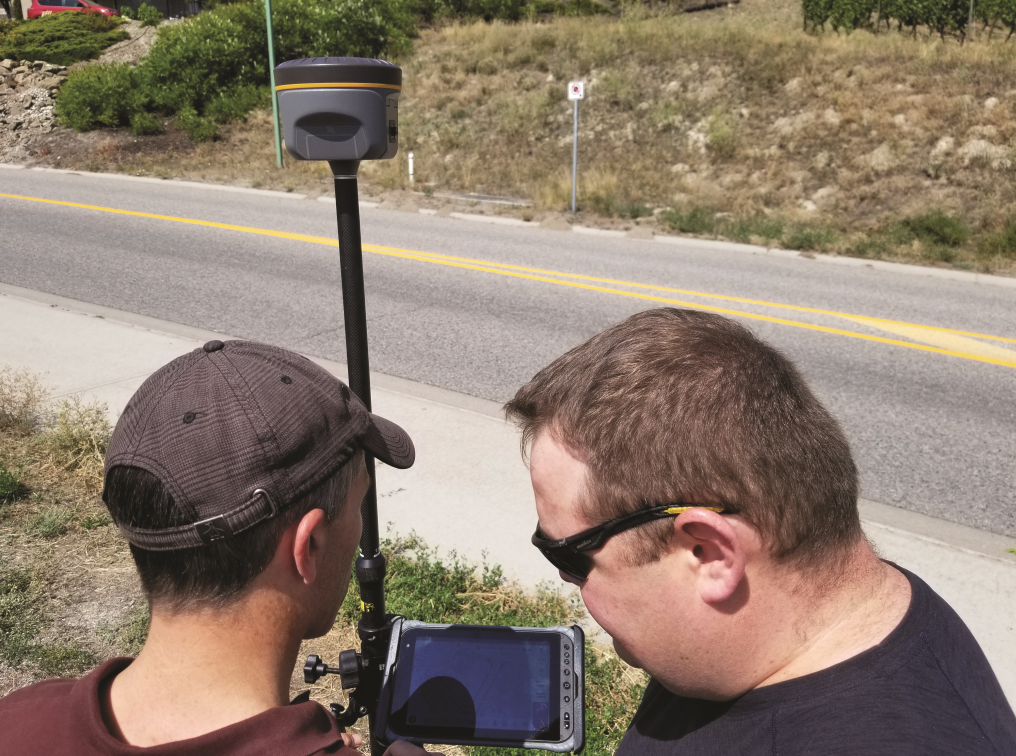 A team test drives MicroSurvey’s FieldGenius for Android paired with a South rover in Canada.

Never Tired of Being Wired

The team at South seems to be young, eager, and happy. I asked Huang, who has been with South since 2014, what he likes about working there, and he said it is interesting work, and the company provides time and space to learn more.

The HQ building is on a placid, tree-lined road in an attractive office park north of Guangzhou. I saw a surveyor in a straw hat down the road. Opposite, across a river, is a hill with what looks to be structures from a past dynasty. But inside the HQ is all high-tech dazzle.

That is Guangzhou in a nutshell. In the heart of the historic Canton region, the seemingly endless vista of skyscrapers runs along a grid of clean and modern streets. The city seems more wired than even Shanghai or Beijing, and in some respects even more than San Francisco. South’s operations have prospered in that environment.

From a past of imitation to rapid R&D and innovation, South’s gear seems top-end in some areas, a bit rough around the edges in others, but definitely meeting the needs of a growing and increasingly tech-driven AEC market.

“What Is South Surveying and Mapping Instrument Co.?” Comment