Mentoring is a key aspect in any career; otherwise how do we learn what we need to do and how we need to work in a particular environment?

Mentoring is even more important for an SME (small- to medium-sized enterprise) or freelancer.

Working on your own is increasingly common in the geospatial field, with the rapid increase of freelancers. As a freelancer or SME, you might interact with very few people on a daily basis, as Nick Duggan mentions at right. Therefore, it is easy to miss out on those happenstance conversations in the corridor or kitchen as well as the planned, strategic medium- and long-term career planning discussions.

Sometimes we can get preoccupied with mentoring being a formal system with booked-in meetings to talk to someone senior concerning our careers and career progression. This is a key bit of mentoring, but there is a whole other side to it, formed of informal meetings and discussions, either in person or remotely, often through social media.

A number of approaches can replace formal settings, and different techniques work for different people. I am able to do a significant chunk of mentoring remotely, primarily through Twitter but also through LinkedIn and my blog. Twitter also has groups based on hashtags that meet at certain times, for example #GISchat is a group of GIS professionals who meet (via Twitter threads) on Wednesdays at 8 pm (GMT). #ECRchat is a group of early-career researchers who meet (also via Twitter threads) on Wednesdays at 11 am, or sometimes 5 pm (GMT) to share experiences of working in academia.

In an SME situation, conferences are also key ways of meeting potential clients and networking, but also meeting your remote colleagues and collaborators in person. For me, the FOSS4G UK conferences are key to this; I helped organize the one in London in March, 2018, and will be attending and running a workshop at the one coming up in Edinburgh in September, 2019. Geomob is another regular conference I have been to—and would attend more frequently if I could! 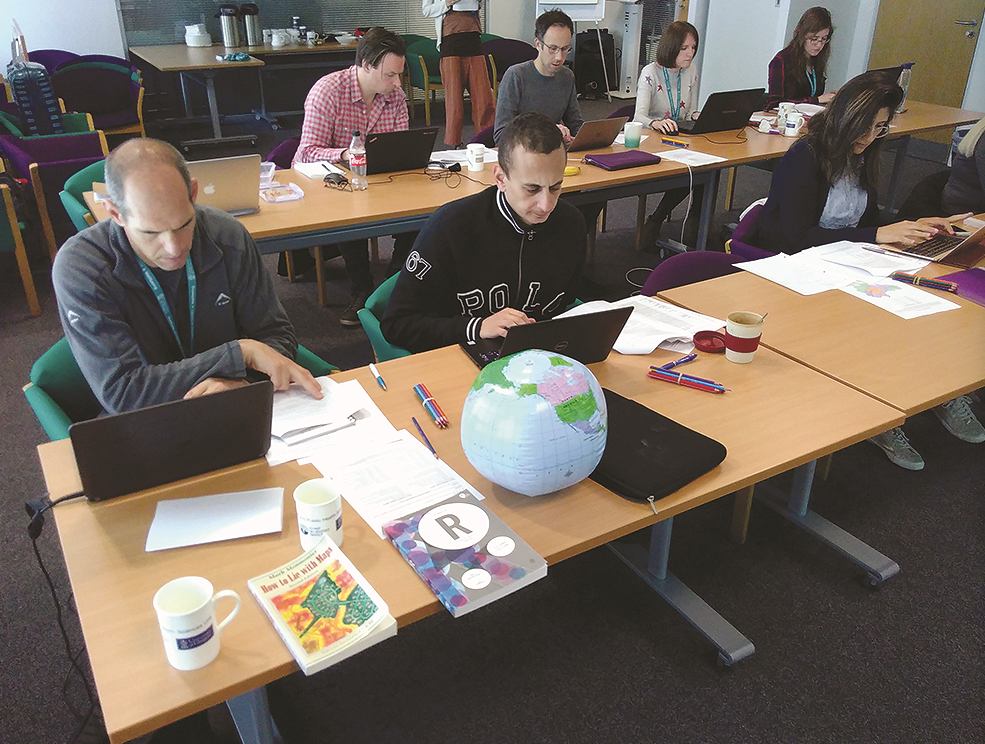 Students at the University of Glasgow learn about R in Bearman’s short GIS training course.

Co-working spaces is another informal approach. These are where freelancers can rent a desk for days or a week to have somewhere to work from and meet likeminded colleagues. This can work really well for people who don’t have a suitable home environment to work in or just want a change of scene from looking at the same four walls each day!

In an SME environment, formal mentoring is something you proactively have to organize, and in some situations there is funding from the government to support this. But more often than not, mentoring is either funded through people’s good will or your own finances.

While the progression of automation has changed the way we work, new technology has also allowed us to collaborate in new and different ways. I can be a part of the GIS community wherever I am in the world just through the power of an internet connection.