This entry is part 57 of 80 in the series Pangaea

We’re all familiar with lidar-based mobile mapping from ground vehicles, and most of us are aware that aerial lidar is being used effectively to do shallow-water mapping along coastal and riverine projects. Deep-water lidar mobile mapping from an ROV? Well it’s a first for me.

Most all of the subsurface surveys I’ve read about were sonar-based, so that’s why I was interested to read about 2G Robotics’ underwater scanning system. This technology is being used to good effect in a wide range of projects in oil and gas, renewable energy, salvage, defense, and archaeology. Let’s take a look at a couple of examples, first in the oil and gas industry.

ADUS DeepOcean is a UK firm that specializes in high-resolution surveys of man-made structures that are totally or partially submerged. Recently ADUS DeepOcean and DeepOcean Ghana Ltd. teamed up for a deep-water subsea 3D laser survey off the West Coast of Africa for Tullow Oil; reportedly this was the first extensive commercial survey of its kind. The survey project covered 12 drilling locations in water depths between 800-1800m. The project set new standards for high-resolution 3D surveys while also proving an alternative and rapid contactless solution to conventional metrology surveys. The survey was completed using an ROV equipped with a 2G Robotics ULS 500 Pro Laser and Sonardyne’s SPRINT INS system. The resulting data exceeded expectations with accuracies approaching 1cm in dynamic operation. (Read a feature about ADUS DeepOcean in xyHt’s upcoming June issue focused on hydrographics.) 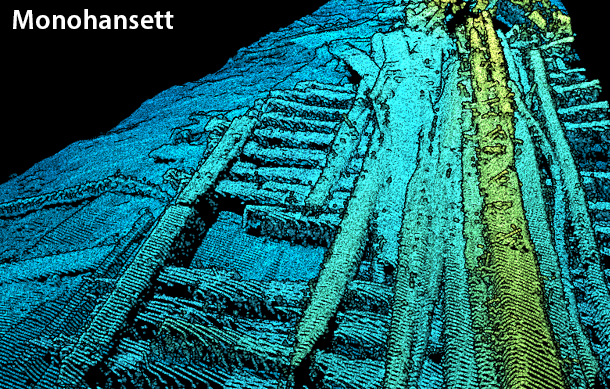 On this side of the pond, 2G Robotics joined with NOAA at the Thunder Bay National Marine Sanctuary on Lake Huron to document America’s maritime history. With the assistance of Offshore Analysis & Research Solutions (OARS), the team employed 2G Robotics’ underwater laser scanning technology to create 3D models of some of America’s most nationally significant shipwrecks. 2G Robotics’ ULS-500 PRO captured data on three high-profile wrecks: the Monohansett, the Ogarita, and the Haltiner Barge. (Watch cool video here.)

Of note was the fact that detailed dimensional data of the Ogarita had never previously been captured due to resolution limitations of traditional sonar and acoustic technologies. High-density 3D-laser-scan data-capture enabled fine-scale dimensional features of the Ogarita to finally be determined. (Monohansett detail shown above.)

This technology promises to offer a great leap forward in underwater mapping and is most definitely one to watch.