An age-old Aesop’s Fable adage says, “Be careful what you wish for, lest it come true!” When the U.S. Geological Survey (USGS) embarked on the National Enhanced Elevation Assessment (NEAA) in 2012, the goal was to document the national-level requirements for enhanced elevation data. Little did USGS know at the time, the report would be the launching platform for the 2015 USGS 3D-Elevation Program (3DEP), and would set a goal to complete a nationwide enhanced elevation survey within eight years, or by 2023.

Currently, the survey is more than 85 percent complete in the lower 48 states and the IfSAR survey for Alaska has been completed. The success of the program has generated petabytes (1,000 terabytes, 1 million gigabytes) of point cloud and digital elevation model (DEM) data.

With the 3DEP program approaching completion of its first acquisition cycle, an even more ambitious program, USGS 3D for the nation program, is set to survey enhanced elevations from the highest mountains to the deepest oceans. In practical terms, surveying inland waterways and waterbodies, along with the oceans surrounding the U.S. and revisiting the terrestrial elevation data, requires a range of technologies.

These technologies include, but are not limited to, conventional linear-mode lidar, Geiger-Avalanche Mode (GaM) lidar, topobathymetric lidar, single- and multi-beam sonar, and side-scan sonar, all of which can be acquired from aerial, surface, and un-crewed and autonomous vehicle platforms. While the end-use may not be concerned with the data acquisition sources, the resulting data acquired by these technologies needs to work seamlessly together to produce the desired derived products.

The hydraulic models, such as the U.S. Army Corps of Engineers (USACE), Hydrologic Engineering Centers River Analysis System (HEC-RAS), and others, require accurate profile elevations through the waterway and onto the floodplain. These models are used for flood protection by many federal and state agencies, including the Southwest Florida Water Management District (SWFWMD). It is also in this capacity that the SWFWMD, through the Minimum Flows and Levels (MFL) program, sets a limit on how much water can be withdrawn from various water resources to prevent significant environmental harm to waterbodies and waterways.

The Withlacoochee River, along with the Hillsborough, Ochlocknee, and Peace Rivers form the four major river systems that drain the southwestern portion of the peninsula of Florida. The Withlacoochee River originates in the Green Swamp, the hydrological heart of central Florida, and traverses generally northwest through Polk, Lake, Sumter, Pasco, Hernando, Citrus, Marion, and Levy counties (map p. 23) before emptying into the Gulf of Mexico at Yankeetown.

In the early 1900s, the Inglis Dam was constructed to supply hydroelectric power to the region, which impounded the Withlacoochee River and formed Lake Rousseau on the river as a portion of the Cross-Florida Barge Canal system and formed a large upstream impoundment, Lake Rousseau. The upper reaches of the Withlacoochee River are characterized by a combination of narrow, winding waters with spring-fed streams and wide-undefined sloughs that interact with a broad landscape of forested wetlands, uplands, and cypress swamps.

As the river flows northwest toward the Gulf of Mexico, it transforms geomorphologically into a meandering stream with high banks, then into a broad and flat flow way with a wide floodplain, and back into a narrow channel with high banks. Ultimately, it widens again behind the impoundment at Lake Rousseau where it now spills into the lower Withlacoochee River and drains to the Gulf of Mexico. 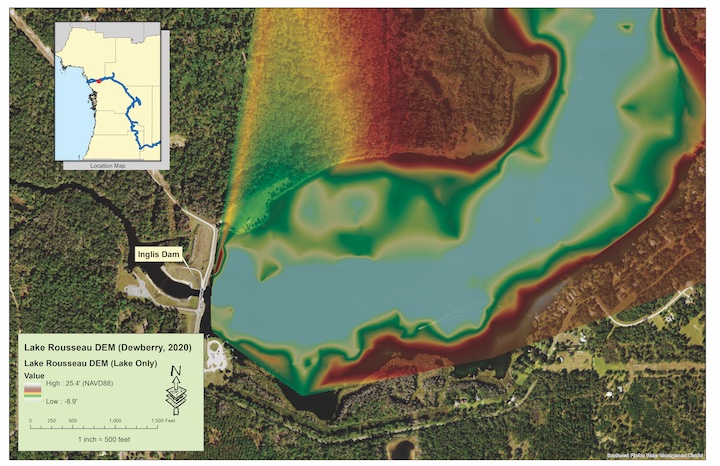 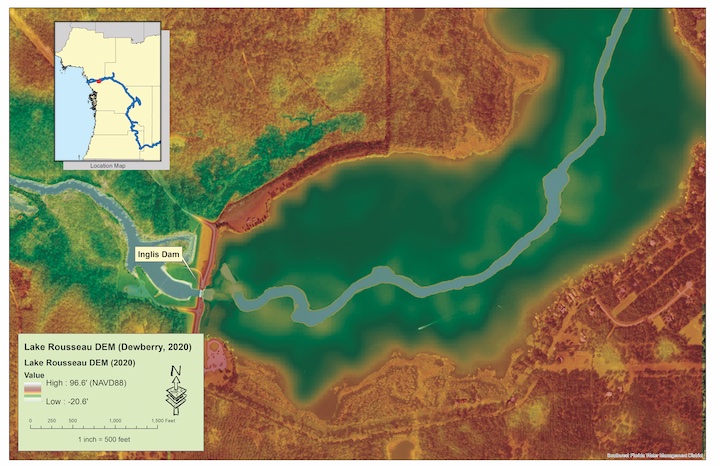 Elevation Data Sources for the River

When the SWFWMD initially modeled the Withlacoochee River in the mid-2000s, prior to 3DEP, lidar survey in Florida was in its infancy. The SWFWMD funded lidar missions that would today be characterized as USGS quality level (QL) 3 and/or QL4 (one or fewer lidar pulses per square meter) along the river floodplain. To survey the bathymetry, the SWFWMD used a combination of differential leveling, conventional pole-soundings, and single-beam sonar. The DEMs produced from the terrestrial lidar and the bathymetry were merged together using Esri software to construct a hybrid, terrestrial/bathymetric DEM for the hydrologic and hydraulic (H&H) modeling.

As we fast-forward to today, Florida has participated in the USGS/3DEP program, collected USGS QL1 lidar data (2018 to 2019), and constructed 2.5 feet of terrestrial DEMs for the Withlacoochee River floodplain and other lands adjacent to the river.

The SWFWMD employed topobathymetric lidar in 2021 to collect bathymetry for the lower Withlacoochee, while high-resolution multi-beam sonar and un-crewed surface vehicles (USV) sonar were also used to survey portions of the river and Lake Rousseau. Additional conventional survey was used to fill-in some critical profile areas.

To update the H&H models along the Lower Withlacoochee, impounded Lake Rousseau, and upper Withlacoochee River, a hybrid DEM needed to be constructed from the multiple data sources. Simply merging the data sources together would not achieve a high-resolution, seamless DEM required for the modeling. The SWFWMD wanted to make the best use of the multiple data sources and multi-temporal data to construct that high-resolution, seamless DEM.

Dewberry, a private professional services firm that provides geospatial and technology solutions, was contracted in early 2020 to assist with the Lake Rousseau update and then with the updates for the upper and lower sections of the river. The following describes the challenges and solutions during the construction of those DEMs.

Lake Rousseau: The Inglis Dam formed the impounded Lake Rousseau. In 2008, transects were surveyed every 150 feet with single-beam sonar. Between 2007 and 2018 (the 3DEP USGS QL1 survey), terrestrial lidar were collected. During the intervening years, the SWFWMD conducted pole-soundings and collected multiple terrestrial and bathymetric check-points by GPS survey.

However, the original, pre-impoundment Withlacoochee River channel remained poorly defined and largely unsurveyed except for the occasional single-beam sonar depths from the 150-foot profiles. When the time came to update the DEM for H&H modeling, there were multiple lidar datasets for the floodplain, each with their derived breaklines and DEMs, low-density, single-beam sonar surveys, conventional pole-soundings for the bathymetry, and spotty data for the channel and no bathymetry near the lock and dam.

Dewberry first analyzed the quality of the available data and provided four recommendations:

Methodologically, the data were processed in Esri-ArcGIS Pro 2.8. Beginning with the construction of a new breakline of the shoreline to confine surface interpolation. Bathymetry from the single-beam sonar were processed by spherical kriging to densify the point spacing between profiles.

Then the resulting points were combined with the multi-beam sonar for the channel and the lidar for the floodplain, and converted into an Esri terrain dataset along with the newly constructed breaklines. The terrain dataset was exported as a raster and validated against SWFWMD checkpoints. The top image above shows the area in the vicinity of the lock and dam before the update, while the lower image shows the same area after the update.

The upper reaches of the Withlacoochee River originate in the Green Swamp where groundwater and surface water interact to produce a tannic-colored water. In areas where the channel is well-defined and stable, it was a simple matter of cut and paste. The breaklines for the river channel were used to clip out of the SWFWMD DEM the previously surveyed river bathymetry and to insert the bathymetry into the 3DEP lidar-derived terrestrial floodplain.

Further downstream however, as the river turns north and broadens and the terrain levels and banks become less distinct, the water velocity decreases, and vegetation accumulates into transient islands in the channel. In these areas, it becomes necessary to be more creative because the lidar breakline from the terrestrial lidar collections may not capture the actual bank, hence the resulting DEM will interpolate in irregular ways onto the floodplain.

Each of these areas were identified and isolated. By comparison to aerial imagery and available survey points, the flow paths around these complex areas were determined, densified, and used to spline the DEM together—a task requiring careful manual review and highly supervised construction.

The lower Withlacoochee River, west of Lake Rousseau, presented an entirely different set of conditions. In the area immediately downstream of the Inglis Bypass Spillway, the current is fast moving and the water is turbulent, proving too treacherous for pole-soundings or a crewed survey boat. For this area, Dewberry suggested an Uncrewed Surface Vehicle (USV) single-beam sonar survey.

Further downstream as the river approaches the Gulf of Mexico, the river is tidally influenced with numerous winding creeks, and typical estuary vegetation. To survey this portion of the river, Dewberry recommended topobathymetric lidar to survey eastward to the extent possible up to Lake Rousseau.

The entire length of the river was flown in the winter of 2021 using Teledyne’s Coastal Zone Mapping Imaging Lidar (CZMIL) sensor. Using the mantra of “lidar first, fill in with sonar later,” the river channel was mapped at low-tide with topobathymetric lidar and later at a higher tide with single-beam sonar to make sure overlap was presented along the banks where lidar voids may occur.

Dewberry worked closely with the SWFWMD to construct hybrid DEMs for updating the H&H models for the Withlacoochee River. Each section of the river, Lake Rousseau, and the upper and lower Withlacoochee, presented a different set of challenges to constructing high-resolution hybrid DEMs from combinations of terrestrial lidar, topobathymetric lidar, single- and multi-beam sonar, and other bathymetric survey inputs.

It was found that no single solution could be applied to even these small geographic regions when trying to integrate data from disparate sources. Manual review and interpretation, reviewing historical (2008) and recent (2018) imagery, and a high-degree of temporal planning led to tide synchronization that was necessary to achieve the project goals. So, we should, indeed, be careful what we wish for.

A significant portion of the DEM development and update was originated by the minimum flows and levels group at the SWFWMD, either directly or indirectly working with Ms. Danielle Rodgers, Dr. Mark Fulkerson, Dr. Lei Yang, Ms. Nicole Hewitt, Dr. Gabe Herrick, and Mr. Jordan Miller. A thank you is also extended to Mr. James Owens, PSM, for his assistance in ground-truthing the bathymetry used in these projects. Their interactions, ideas, and guidance were essential to the success of these projects.