An indoor spatial intelligence start-up from Germany is pushing the BIM industry forward through a combo of navigation and visualization.

The line of people at the Intergeo Trade Fair in Frankfurt, Germany, waiting to get their hands on the NavVis M6 was long. Where everyone was on the lookout for the latest geospatial products on offer, this smartly-designed indoor mobile mapping system was definitely attracting a lot of attention.

After more than 20 minutes of waiting in line, I was called by a friendly guy from NavVis who signaled for me to push the M6’s triple-wheeled cart body across the hall. While I was doing this, the four scanners (one of which is lidar) and six cameras in its compact head captured 360° imagery and point-cloud data of the surrounding area, simultaneously displaying the live images on the tablet screen in front of me.

I can imagine surveyors and AEC professionals using this machine to create immersive as-built BIM models.

The driving force behind the M6 is NavVis’s 6D simultaneous localization and mapping (SLAM) technology. Currently available indoor static laser scanners assume that the floor is flat, but the 6D SLAM technology of NavVis determines the position and orientation of the scanner in six degrees of freedom (x, y, z, and yaw, pitch, roll), resulting in more accurate and realistic 3D models of indoor environments, including floors with uneven surfaces.

Because of the quick speed and scalability that its product provides in capturing high-quality 3D data, NavVis believes that “SLAM is the disruptive technology surveyors have been waiting for.”

Since its launch in 2013, the company has been winning awards and successfully raising funds. It won the Spark award from McKinsey and Handelsblatt for new German startups that are changing the digital industry, while its success story was picked up by The Economist, the global business weekly.

Last December, it received $35.5 million USD of funding, one of the most raised in the geospatial industry. And it continues to make strides as it counts several big companies such as Volkswagen, Daimler, Lenovo, and Deutsche Telekom among its users.

Last March, the company launched NavVis Cloud, its cloud-based platform that gives laser-scanning professionals access to NavVis IndoorViewer as a software-as-a-service (SaaS) solution. With the NavVis Cloud, immersive web-based 3D buildings can be created online as part of every scanning project.

I caught up via email with Viktoria Langley, spokesperson of NavVis. She described to me the early days of the company, how their clients drive their product development, and their plans for the future. 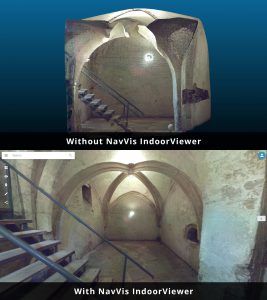 Marc Delgado: How did you come up with your company name?

Viktoria Langley: It is a combination of two technologies—navigation and visualization —that inspired the original technology of NavVis. Our CTO, Dr. Georg Schroth, first came up with the idea during his stay at the Stanford University GPS lab. He initially wanted to develop a new approach to indoor positioning based on computer vision.

After years of research at the Technical University of Munich with Robert Huitl and Sebastian Hilsenbeck, they founded the company with Felix Reinshangen, a former consultant.

MD: Was there a customer problem that was worth solving when the company founders thought about the original product?

VL: While we have super-detailed and well maintained maps of the outdoors, as well as great positioning, we lack the same infrastructure indoors. At the same time, more and more enterprises are pushing for digitization, especially in manufacturing, in order to build digital twins of entire factories. So, our solution is to create fast and detailed maps of buildings and assets, with data made available to all users right in their browsers.

MD: Did you do market re- search and product development?

VL: Research and product development were done from 2007 to 2015. Then we launched our first product in 2015. Originally this was a pure technology push. Our first-generation technology was then thoroughly tested together with customers in different verticals, especially the German automotive manufacturing sector. They were key initial customers that helped us develop our product. With the results in mind, our second-generation products were then designed to specifically tackle the surveying and BIM sectors.

MD: How were the initial years like? Were there many challenges?

VL: Our technology can be applied to many markets, so we went where customer demand came from. And that was primarily from surveyors for our hardware and enterprises for our software.

The initial assumption was that indoor navigation would be our most popular product, but mobile scanning and 3D visualization of manufacturing facilities for enterprises have proven much more lucrative.

The founders were experienced in software and management, but consequently developing and ramping up the hardware production proved to be a huge challenge.

As for all start-ups, funding was a big topic. Our technology was new and perhaps a bit obscure for most investors during those days. Luckily, we found a group of amazing angel and venture capital investors who believed in our team and technology early on. They have been supporting us ever since.

MD: What is the technology behind your products and services?

VL: Our M6 indoor mobile mapping system is based on 6D SLAM technology. The NavVis IndoorViewer is the software that combines point clouds with 360-degree images for immersive 3D visualization in a web-based application. 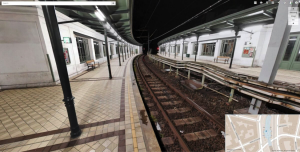 Scanned image of a metro station in Germany under poor lighting captured by the NavVis indoor mobile mapping system.

MD: What are your company’s biggest achievements so far?

VL: We have most of the world‘s leading automotive manufacturers as customers. Also, we have expanded overseas, with customers in over 30 countries and offices in New York and Shanghai.

MD: What other market areas would you want to reach?

VL: Our main customer demand comes from the manufacturing industry, but we are already seeing a growing demand from both facility management and construction sectors.

MD: What are your plans in the next five years?

VL: We are growing the team every month, and we continue to invest in R&D to bring new products to the market.

MD: How do you sustain your success?

VL: Through constant innovation, diligent execution of projects, and a strong focus on our team and customers.

MD: How important is customer feedback?

VL: Many of the new features of our M6 model are based on customer feedback, including tool-less assembly and hot-swappable batteries. We are a customer-focused company and we evolve to meet their needs. Feedback is incredibly important for us, and this has helped shaped the products and features that we work on.