With a long career in emergency management, Richard Butgereit is well aware of the devastating impact of natural disasters; however, his normal role is monitoring the event from afar and facilitating the assistance needed afterward. On December 30, 2021, in suburban Colorado, he experienced a catastrophic event from a different perspective as the Marshall Fire approached his neighborhood, causing him to evacuate.

That morning, erratic high winds with gusts from 80 to 100 miles per hour swept across the drought-parched open space in south Boulder County. A spark came from an unknown source and that was all it took to start the destruction of 6,000 acres throughout the towns of Superior and Louisville.

Butgereit, Director of Catastrophic Response for the Geospatial Intelligence Consortium (GIC), was at home reviewing aerial imagery from a different disaster, the recent tornadoes in Kentucky, when he noticed the light outside was a strange color. Further inspection revealed ash and smoke in the air. Less than two hours later he was leaving his home with sleeping bags, a few items of clothing and two children, heading out of harm’s way to stay at the GIC office in Broomfield. 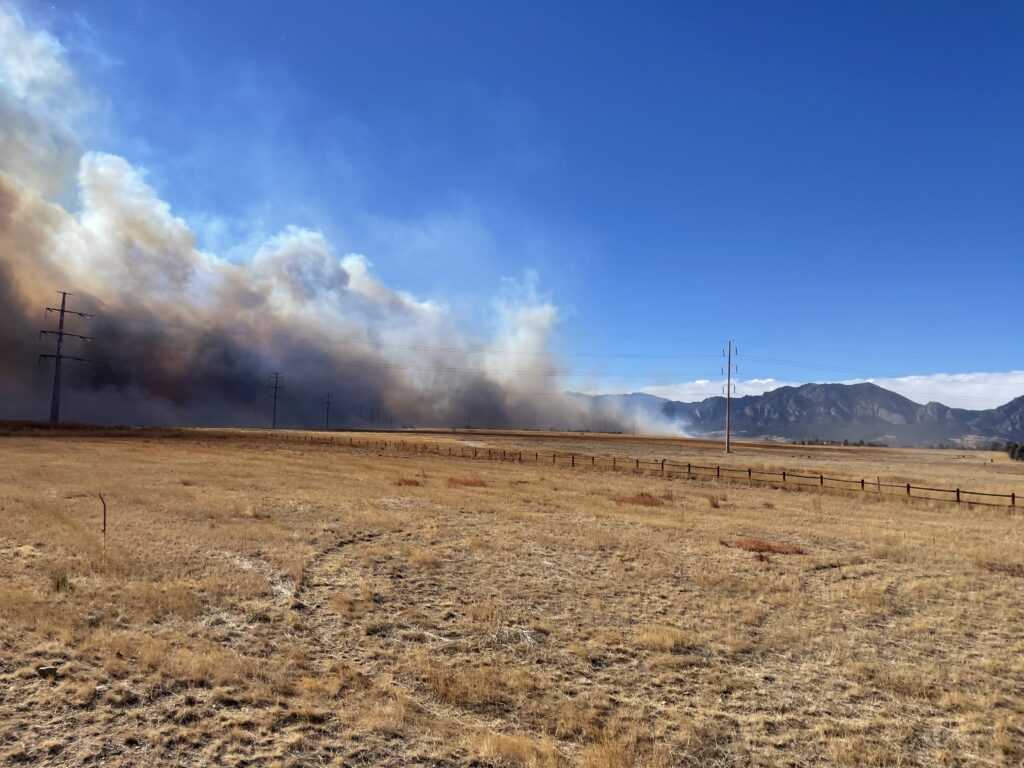 “After I noticed the smoke around noon, I checked several online resources, including the Boulder Office of Emergency Management website and #FireMappers, a crowdsourcing collaboration for early detection of wildfires upon which I depend heavily at work,” says Butgereit. “Then I decided to drive to a nearby high point on Davidson Mesa to get a first-hand view. From there I could see the fire south of U.S. 36. I estimated we had an hour before it might cross the highway, but it moved unbelievably fast. Fortunately, we didn’t wait for the evacuation notice.”

The unpredictable winds carried the fire through treetops and across grassy open space, burning some homes even before emergency alerts were sent and making fighting the fire practically impossible. In less than 24 hours, the Marshall Fire destroyed 1,084 homes and seven businesses and damaged 149 homes and 30 businesses. Early estimates of property damage are in excess of $1 billion.

Faster damage assessment   The GIC is an initiative launched by the National Insurance Crime Bureau (NICB), an organization that acts as an intermediary between law enforcement/first responders and insurance companies to assist with disaster recovery efforts. In partnership with Vexcel Imaging, manufacturer of UltraCam aerial sensor systems, GIC works to quickly provide its membership with pre- and post-disaster imagery to expedite claim processing.

After a natural disaster, the GIC, along with its operations partner Vexcel, collects aerial imagery with manned aircraft equipped with UltraCam cameras. The disaster imagery (called gray sky) can cover a few hundred to thousands of square kilometers. For easy comparison, the gray sky imagery is consistent with high-resolution blue sky imagery previously collected across the U.S.

More than 30,000 people were displaced temporarily or permanently from their homes as a result of the Marshall Fire. Disaster assistance centers operated by FEMA, Boulder County, Red Cross, and other relief agencies were quickly established and all had access to GIC imagery for free.

Although Butgereit’s home was still standing, some nearby did not survive, and others sustained smoke damage. His family could not return home for four days while gas pipes throughout the neighborhood were checked for leaks and power restored. Soon, an insurance “village” of mobile command vehicles was set up in Lafayette to give people impacted by the fire the opportunity to file claims with their individual insurers. 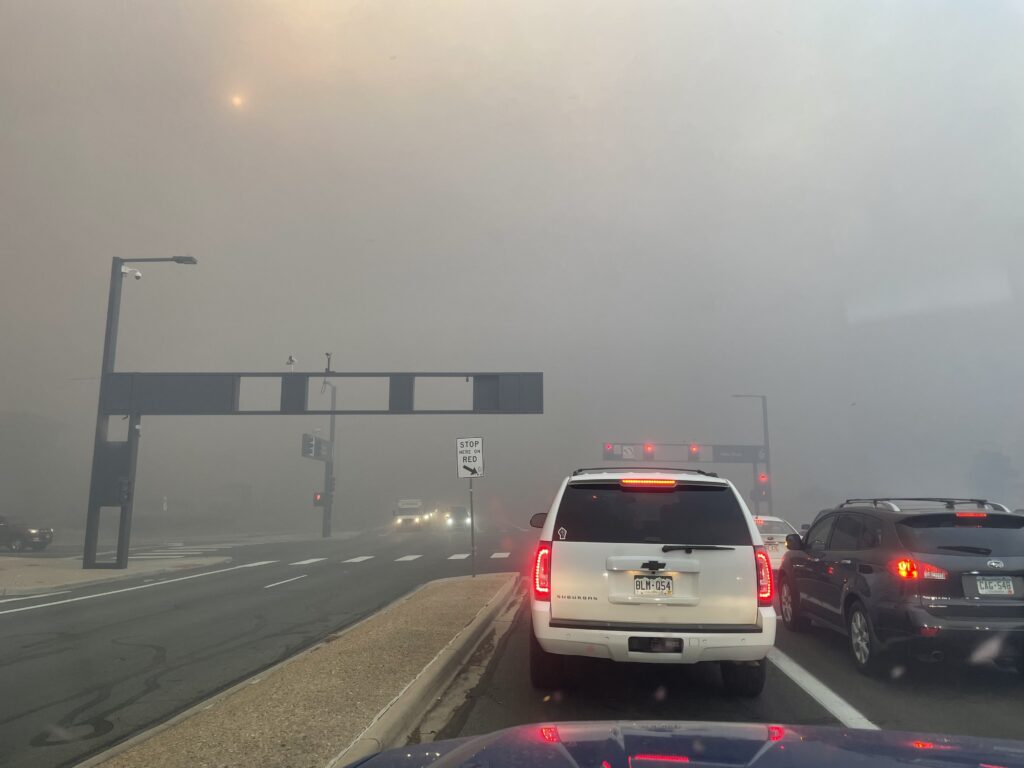 “My insurer is a member of GIC, and I discussed the GIC imagery with the adjustor. I was happy to hear it was beneficial for expediting the claims,” says Butgereit. “Based on just an address, the adjustor can pull up the imagery and determine that the claimant’s property is within the area impacted. Without waiting for a site visit, they were able to give approval on the spot, including for total losses.”

Butgereit runs the program at GIC where disaster outlooks and conditions are monitored to keep the team prepared for potential response. The gray sky (post-disaster) imagery is posted to GIC platforms to make it accessible to members, law enforcement, emergency responders, and others.

“We determine whether the event meets our thresholds, delineate any areas of interest for imagery acquisition, and coordinate the team through deployment, acquisition, shipping to our location in Centennial, Colorado, processing, and delivery,” says Butgereit.

“Government agencies work together to provide services to vulnerable communities, but insurance is really the core safety net for home and business owners,” Butgereit says. “Fast turnaround is important for claims processing and long-term fraud investigation. To expedite these processes, the GIC service level agreement assures delivery of images to members within 24 hours of the aircraft touching down after a flight.”

Next steps in recovery

In the early morning hours of December 31, a snowstorm started dumping 10 inches of snow on the area, further complicating emergency responder activity. Along with single-digit temperatures and widespread power outages, the homes still standing were at high risk for frozen pipes and additional damage.

When it was safe to fly, the GIC activated Vexcel Imaging aircraft on call in nearby Longmont to collect the 85-square-kilometer area over the impacted communities. With UltraCam Eagle cameras, 7.5-cm GSD 4-band aerial imagery was captured in just one hour. As part of its partnership with GIC, Vexcel collects blue sky and gray sky imagery of the member’s service areas to facilitate before-and-after comparisons.

“I contacted the City of Louisville where I live to make sure they knew about GIC,” says Butgereit. “I helped them access the imagery and integrate it into their platform as a base map for conducting immediate damage assessments and for future planning.”

In the aftermath of catastrophic disasters, access to high-resolution imagery provides insight into areas not accessible on the ground and eases the immediate need for financial relief for the impacted community. Insurance claimants benefit from improved customer service, while government entities have better information on which to base rebuilding and future disaster mitigation activities. ν

High-resolution aerial imagery collected by Vexcel Imaging shows the remains of a subdivision in Superior, Colorado, after the Marshall Fire. Photo credit GIC/Vexcel.

Before and after pictures of this Louisville, Colorado, subdivision, captured with UltraCam aerial systems flown in manned aircraft, are representative of the devastating loss of over 1,000 homes. Photo credit GIC/Vexcel.