This entry is part 15 of 80 in the series Pangaea

Every time I go to this conference I get the sensation of drinking from a fire hose: so much lidar technology! This year the International LiDAR Mapping Forum (ILMF) became Geo Week with the addition of the ASPRS annual conference and MAPPS winter conference. Here’s a small sample of the wide array of lidar tech on display at the conference.

Hovermap, an autonomous SLAM-based lidar payload for UAS, was introduced for the first time at the ILMF conference. Hovermap is a self-contained plug-and-play payload which can be integrated into a range of UAS to provide them with advanced capabilities—such as omni-directional, lidar-based collision avoidance and GPS-denied flight—allowing UAS to be flown safely underground, indoors, or close-up to structures to inspect and map them.

Moving from UAS-borne lidar to the portable side, I saw GreenValley International’s LiBackpack C50 on display. The C50 is a SLAM-based 3D mapping system which integrates lidar and 360° imaging technologies to produce true-color point clouds. Available in both handheld and backpack modes, the LiBackpack C50 is a mobile laser scanning solution that incorporates two Velodyne VLP-16 lidar sensors for indoor and outdoor applications. The system’s dual-laser sensors allow 3D features within the point cloud to be better defined compared to other mobile mapping systems.

The C50 is offered in a durable, lightweight housing, giving users the ability to scan large areas for up to two hours. Users can opt for a lidar-only solution when colorized point clouds are not required. Post-processing is accomplished via the firm’s LiDAR360 software.

In the handheld lidar space, Paracosm was on hand to tout their PX-80. The portable lidar offers 80-meter range and uses Paracosm’s proprietary SLAM technology which is a unique fusion of lidar, color imagery, and IMU data. The PX80 automatically produces point clouds in full color and generates spherical images which can be viewed in Retrace. 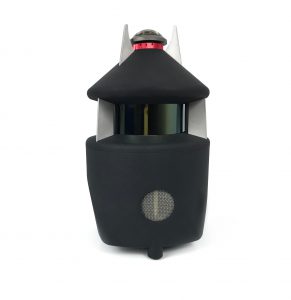 The unit offers single person operation and zero setup. The firm claims that the unit is 15 times faster than tripod scanners, enabling projects to be scanned daily, weekly, or as often as operators require. 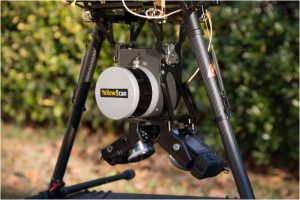 YellowScan showed me its new quick-release mount designed for the DJI M600. The mount is compatible with the firm’s Vx and Surveyors line of lidar units and offers photogrammetry options in both single- and dual-camera configurations. The firm also opened invitations to its LiDAR for Drone Conference taking place March 20 and 21 in Domaine de Verchant, Castelnau-Le-Lez, France.

Keep an eye out for even more coverage of Geo Week in the March issue of xyHt in our Located section.