I’m a surveyor and technical specialist at Plowman Craven, one of the largest surveying companies in the UK. My company has worked closely with Leica Geosystems for more than 50 years, going back to the days of the T2 mechanical theodolite and DI10 EDM. Technology is different now, but the collaboration between our two organizations remains just as strong.

Ahead of the launch of RTC360 laser scanner and updated Cyclone REGISTER 360 software, we worked for four years with the reality-capture software teams in California and the hardware developers in Heerbrugg, Switzerland—as part of Leica Geosystems’ Customer Council.

We were involved in the development of the RTC360 from inception to completion, and we were delighted to see the finished product launched last year and immediately added two units to our existing fleet of 16 scanners.

One of our first projects using this new technology was for a mechanical engineering (ME) consultancy that was tasked with phasing the refit of a busy public service building while the building remained fully operational. This was an exceptionally difficult task that exposed our client to a high amount of risk.

Plowman Craven has expertise in many survey fields, but—even with our capacity—we know that the latency in the authoring of a Revit model needed to inform final design would delay decision-making of how to phase the refit. This meant decisions needed to be made immediately from the site findings so that they could be communicated to the building’s owner/operator.

To facilitate this, we worked directly with the client’s on-site team—with them often directing operations and sharing access arrangements to reach the ceiling voids. We ran the Cyclone Field 360 app on four tablets: one used by the Plowman Craven team to control the scanning operations and the others by the ME to geotag their findings directly into the point cloud data.

Where a pipe or duct was found to travel through a wall, the ME was able to ask us to immediately scan the adjacent spaces to identify where that service was rooted. This was often in adjoining roof voids that would be very difficult to access through a series of rooms and staircases. However, by using the VIS (visual inertial system) technology it was actually extremely simple, and the surveyors would then back-fill with scanning operations to ensure full coverage of the site. 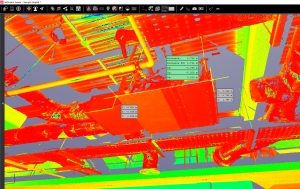 One of Plowman Craven’s clients uses the Jetstream Viewer to take dimensions of some plant.

The HDR camera, combined with the ability of the RTC360 to identify labelling on the pipes and ducts in the point cloud, enabled us to do the work much more safely using extending tripods rather than ladders and torches.

All the users could then interface with the RTC360 and update the data along with the data already in the system. When the ME and surveyors were beyond RTC360’s WiFi range—including when back in their offices or while traveling—the lightweight, colored 3D view could still be interrogated and geotags added to the point cloud. This would then sync with the RTC360 once reconnected by WiFi, with all the new information being pushed out to all users.

Once we finished the on-site operations, the on-site registration tools of Field 360 allowed the project to be rapidly registered in Register 360 software.

We then provided the point cloud data to the client as a TruView and in Leica Jetstream Viewer. The client could then continue to interact with the point cloud, viewing their on-site notes ahead of the Revit model being authored.

Using CloudWorx for Revit, our modelers are able to see the engineer’s notes when populating Revit elements’ details and incorporate that into the modeling and attribution. In cases where plant models were identifiable, the Revit family could be obtained from the manufacturer and added into the Revit model—detail that would otherwise be difficult to extract from the point cloud.

The client’s engagement has enabled them to complete the work, make and manage live decisions, advise the owner/operator of the current refit strategy, and watch the information they have collected on site be populated within the model and fed into the delivery.

We’re extremely proud to have contributed ideas and technical know-how that helped to shape the RTC360’s features and functionality as well as the ability to scale the solution for an organization of our size.