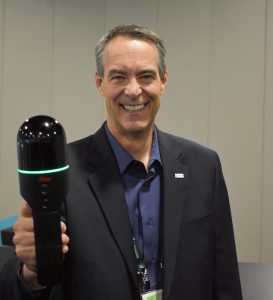 SLAM (simultaneous localization and mapping) lidar handhelds have become popular for BIM, as-builts, and rapid 3D modeling. The new Leica Geosystems BLK2GO shares some of the core technologies of earlier members of the BLK family (like the BLK360 scanner).

What distinguishes this from many of the other SLAM handhelds is that it utilizes cameras to stabilize the inertial systems for continuous point cloud registration, similar to the VIS (visual inertial system) of the RTC360 announced last year. This handheld imaging scanner weighs less than a Kg; its dual-axis scanner shoots 700,000 pts/sec; and it has a 12MP detail camera. It’s shown here with Ken Mooyman, executive VP at Hexagon Geosystems.

Users and fans of Cyclone learned more about how Leica Geosystems has merged automated cloud-analysis and elements of 3D Reshaper into 3DR that is a centralized platform for rapid reality-capture workflows. 3DR complements the workflow of Cyclone FIELD 360 and Cyclone REGISTER 360. The Cyclone family of software has long set a high standard for “cloud-jockey” tools but, like anything, was due for an update. From talking with users at HxGN, this upgrade did not disappoint. 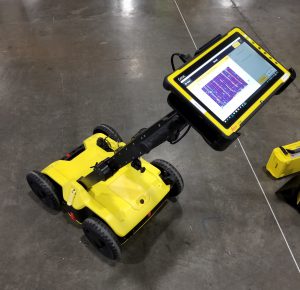 A universal point of pain in the use of ground penetrating radar—and a hindrance to productivity—has been in the interpretation (and misinterpretation) of legacy hyperbole graphs. Only the most experienced GPR practitioners could “read the tea leaves.” But that is changing rapidly.

Hexagon announced the DSX utility detection solution that features a user friendly and graphically rich interface that connects signal returns to identify linear utilities in 3D. Much like the software solutions that have been developed for larger, multichannel GPR systems like Hexagon’s Stream C, DSX can use the smaller (e.g. 2 channel) lawnmower-size units like this one.

“There is no conflict between saving the planet and making money,” said Hexagon CEO Ola Rollén, noting successes like the innovative firm 4ocean (clearing plastic waste from the sea). He said that progress in saving the planet needs to be an industry movement. In his data-rich keynote address Rollén examined multiple challenges of global sustainability, which included— but also went beyond—familiar environmental themes.

He also focused on how innovation, automation, and smarter processes will become crucial in supporting a rapidly growing population with sustainable infrastructure, energy, transportation, food, products, and resources. With his own children sitting in the front row of the auditorium, his keynote underscored some of the key issues on the minds of the current generation. 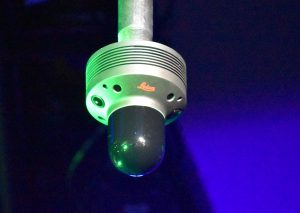 During his keynote, Hexagon Geosystems president Juergen Dold asked the audience to look up at the ceiling of the auditorium, and there was yet another new entrant into the BLK family: the BLK247. A cousin of the BLK2GO, the BLK247 is an example of advanced edge computing as it processes continuous live scanning to detect changes (as specified by the user).

With an advantage over camera-based systems in that it can work in total darkness, it provides a digital geofence where materials, equipment, and even human movements can be detected for safety, security, asset, and productivity monitoring. While aimed mainly at security and safety uses now, let’s imagine how something like this could be used, for instance, for real-time rock wall or construction materials/aggregates monitoring?