This entry is part 7 of 13 in the series GeoDude

Above: Although not yet fully mainstream for topographic surveys, laser scanning is frequently used to topo sites with a lot of detail and hardscape. Credit: Allegheny Surveys.

With new and emerging technologies such as laser scanning, many professionals want to know “When is the right time to get in?” They may worry about getting in too soon or too late.

To try to answer this question, Part 1 of this 2-part article describes the “technology adoption cycle” that every successful new technology goes through. Depending on where you and your organization’s thinking matches up within a technology’s adoption cycle, you can get a pretty good sense of when timing is appropriate for you to get in. 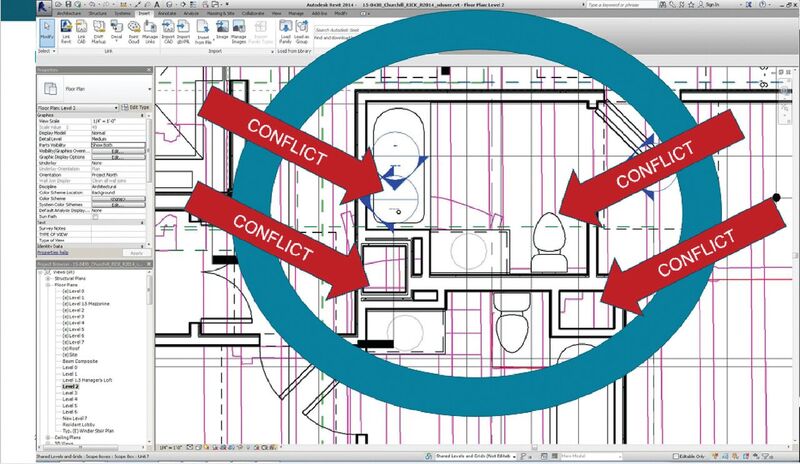 Below: Laser scanning is being rapidly adopted for building surveys and BIM projects. For building revamps, costly design/construction conflicts can be identified and avoided prior to the start of construction. Credit: Rick Engineering and Allgire Construction.

Techies/innovators: They are the first to acquire new technology. What’s important to them is a) they think it’s exciting, and b) they want their friends and competitors to know they’re the first to have it.

Early adopters or visionaries: These people/organizations see potential of new technology to dramatically improve their business by gaining a competitive advantage in the market. Understanding there’s more risk in the early stages, they want to gain valuable expertise and reference projects for a competitive advantage.

Early majority: This and the “late majority” comprise the bulk of the market. More risk-averse than early adopters, these people want to use the technology for everyday work with high certainty that it will be profitable. They don’t want it to disrupt their work processes or their organization.

Late majority: These are waiting for the technology to be standardized. The technology has evolved to where it’s simply the way certain work is now done, and there are standards around it.

Laggards: Last to get in (and maybe they never do), in the survey world these folks are still using mechanical drafting tools. They go kicking and screaming into any new technology.

For the above descriptions, I again acknowledge Geoffrey Moore’s Crossing the Chasm, a fun and informative read.

Where Are You with Adopting Laser Scanning?

The answer is, “It depends.” If you haven’t gotten into laser scanning yet, you’re not alone. Laser scanning has not yet fully penetrated the mainstream surveying market, but it’s definitely en route, and there are several niches/sub-segments where it’s already mainstream. Here’s my take on today’s adoption status for various applications:

Topographic and site surveys: This is clearly one of the largest potential uses of scanning, and, in fact, laser scanning is used often for these applications. Today it tends to be a go-to method when a site has a lot of hardscape and detail. Many firms with laser scanning capability use it extremely efficiently for everyday topos, but many firms, especially smaller ones, still do not have laser scanning capability. Likewise, ones in geographic areas with heavy vegetation often hesitate to get into scanning because of scanning’s line-of-sight constraints.

With the latest round of much more affordable scanners and with more drafting and design software incorporating point-cloud processing capability, it will be interesting to see how those new tools play out in this area.

Forensics is currently one of the very highest growth areas for laser scanning.

As-built and building documentation surveys: Laser scanning is often used for these applications; however, I think it would be pushing it to say that it’s mainstream here in the U.S. (these are already mainstream in the UK).

Within this segment, there’s a major trend within the BIM community to use laser scanning at various stages of new building construction projects, especially for design verification, construction QA, and construction planning on large, complex buildings. Within this segment, I think scanning is rapidly approaching the early majority stage of adoption. These applications are served by service providers/surveying firms or increasingly by construction companies that acquire their own scanning capability and self-perform.

It’s clear that construction firms can realize a “big win” if they can successfully deploy the technology and integrate it efficiently throughout a project and their organization, but today there are relatively few such construction firms at that top level of success. Many, however, are on the path to it.

For traditional building documentation or existing conditions surveys, many architects still do this task themselves. Architects, as a group, have been slow to adopt scanning; very few firms own scanners. A growing number out-source scanning to service providers for certain large projects, but the majority still prefer to use manual methods for measuring up spaces. Many architects are loath to outsource the building measurement task as they feel they are taking away from their own billable hours and that building measurement is their own specialty expertise.

Within the buildings category, the above-ceiling interstitial space for hospitals has become a standard application for scanning. These spaces are often highly congested with utilities and are frequently modified to accommodate new systems. This application is well beyond the early adopter stage.

For subdivisions and residential building surveys, laser scanning is not often used. I’m aware of only a few instances, and these were special situations for very high-end developments. Laser scanning is far from mainstream in this space.

“Walk-around” scanning–using push carts, handhelds, or backpacks–is starting to get traction for building interior applications where 2-3 cm accuracy is sufficient. These types of tools are in early adopter stage for this area.

Landslides and slope assessments: Depending on the size and scale of the earth movement, scanning is well beyond the early adopter stage for organizations that do these types of surveys. For many, laser scanning of slides is simply blocking and tackling: basic survey work. UAVs are also penetrating these applications.

Boundary surveys and ALTAs: I am aware of some progressive firms that use scanning for such surveys, especially for business properties. In these cases, firms use scanning as a competitive advantage over those that don’t, so this application area is still in the hands of early adopters and visionaries.

Quantity surveys: This is an excellent application for scanning, especially when accurate quantity surveys are important. However, I think that most quantity surveys today are not done with scanning; traditional methods (total station, GPS, or aerial) are used instead. Scanning is beyond early adopter stage for this but it’s still not fully mainstream. UAVs are also penetrating this segment. Electric distribution towers and substations: Substations are more commonly scanned than the towers themselves, but both are beyond the early adopter stage. For organizations that specialize in such surveys, laser scanning is generally seen as the preferred method, so from that standpoint it’s mainstream. Organizations that do these only once in a while usually won’t use scanning unless they happen to already have a scanner.

Although surveying cell towers is a potentially large opportunity, today the use of scanning for this application is still in the early adopter stage.
Credit: Needmore Towers Inc/Ehresmann Engineering.

Cell towers: The use of scanning for capturing cell tower geometry is still in the early adopter stage. This is a very large market opportunity, but scanning has thus far penetrated it only slightly because a) scanning’s cost is higher than the cost of traditional manual/climbing methods, and b) staff need to climb towers anyway to extract certain, specific measurements and tag information. That being said, thousands of cell towers are scanned each year.

Forensics: In the big picture, scanning is used by a relatively small portion of candidate crime labs, crash investigation firms, and forensic professionals who could benefit from using it. Many organizations are government agencies with tight budget constraints and staff who are neither survey- nor CAD-savvy, so acquiring the technology and deploying it are non-trivial tasks.

Heritage documentation: Scanning is a natural for this and is heavily used to document historic sites and properties. Nevertheless, this is a money-starved field often serviced by universities and non-profits, so in the big picture, most historic site documentation is still done manually or with lower-end instruments. Scanned historic sites are usually of high value and with high public profiles, like Mount Rushmore, the Statue of Liberty, etc.

Entertainment: movies, video games, TV ads: Believe it or not, laser scanning is probably further penetrated into this specialty segment than any other application. There isn’t a special effects house or major movie production company that deploys computer graphics (CG) special effects that doesn’t use laser scanning where appropriate. In fact, the very first successful commercial application of laser scanning was capturing a movie set (Cyrax‘ use in Starship Troopers) in which CG creatures were later “placed” into it. That project was the subject of the first feature article on laser scanning to appear in a survey publication: xyHt’s predecessor, Professional Surveyor Magazine, back in 1999.

GIS and facility management: The use of laser scanning here is still early adopter/visionary stage. A few companies have started to offer GIS and FM services that incorporate laser scans that can be “tagged” with asset information (features and attributes). However, this is not a plug-and-play implementation; special software and field procedures are needed to implement these solutions. Watch this space, though, as there’s large potential here. Where Do You and Your Firm Fit into This Picture?

First, consider the general nature of yourself and your organization. Does your firm use new technology for competitive advantage or simply to make predictable profits? Does it wait for new technology to be standardized before jumping in?

By matching up the type of organization that you belong to with the types of applications and markets that you service, you can better assess when the right time is for you to get in.