Whether you learn fundamentals of surveying from a formal degree program, certificate program, CEU seminars and workshops, self-study, or in-the-field training, you feel a certain delight in that moment of discovery when the theoretical has met the practical. These moments come when (what first appear to be) dry mathematical or legal principles taught in the classroom reveal their real-world utility in the field or when the surveyor who has come into the profession via hands-on experience finds validation of established field practices in the pages of a textbook.

Where Theory Meets Practice kicks off with an installment by Dr. Charles Ghilani, surveying educator and author of surveying textbooks. This column will appear regularly with more from Dr. Ghilani and other noteworthy surveying and geodesy educators and practitioners. Each column will focus on a specific element of surveying or geodesy theory as well as practical applications. We hope you find these columns educational and will perhaps even pause for reflection on how we have gained our own understanding of these elements. We also invite your ideas for future installments of this new column.

At times there is a need to run a traverse between two state plane coordinate system (SPCS) zones. An example is a traverse that starts with Pennsylvania (PA) North Zone coordinates but connects to a station in the PA South, NJ, NY, or OH state plane coordinate system zone. There is often confusion on how to do this properly when it’s really a simple matter. To understand why this is the case, we need to understand the theory behind map projections. 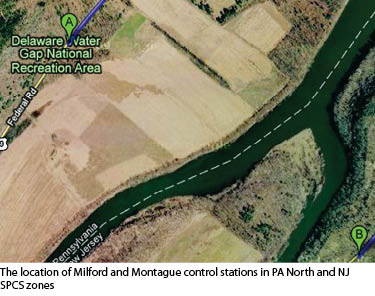 Some people believe that the zones stop at their limits. This is equivalent to people believing they would sail off the edge of the Earth before Columbus proved otherwise. While these developable surfaces have their limitations, it is important to realize that the map projections themselves span almost the entire Earth, and thus do not have the physical boundaries as defined by the state plane coordinate systems. In essence, the SPCS zone limits are not defined by the map projection system but rather by the desire to limit the scaling differences between geodetic distances and their equivalent grid distances on the mapping surface.

The fact that the map projection surface does not stop at some political boundary becomes the basis for converting between zones. For example, the PA North zone actually circles the Earth. So what happens if you use the PA North zone parameters to compute a point in Europe? Quite simply, you would get rather large SPCS coordinate values and a huge convergence angle. Still, if proper reduction techniques are followed, the computed coordinates will be located correctly in the map projection system. Figure 1 depicts the entire conterminous U.S. (CONUS) projected using the PA North zone state plane coordinate system.

Notice that the PA North zone projection system does not stop at its well-known political boundaries. Thus, it would be entirely possible for the United States to adopt the PA North zone map projection system for the entire country. However, if we did this the distortion between the geodetic distances and their equivalent mapping lengths would be considerable in most regions of the country, and the difference between a geodetic azimuth and its equivalent mapping or grid azimuth could be large. For example, near the west coast it would be on the order of 27°.
Nevertheless, this example demonstrates one possible solution to traverses that cross zone boundaries.

Itemizing, the procedure is:

A second method that could be used is to:

However, this method inhibits one’s ability to perform standard traverse adjustments on the survey. Thus, I prefer the first method because standard computational practices can be used. If required, after adjusting the survey, the final adjusted station coordinates located physically in the second zone can be transformed back to the original zone, and from these coordinates adjusted observational values appropriate for the second zone can be computed by inversing the SPCS coordinates.

The first method has one important concept that must be followed. That is, all observational reductions and coordinate values must made be in a single zone. This is due to the fact that not only are the coordinates in the two zones different but also the convergence angles for the direction of courses and the scale factors at the stations, which are used to reduce geodetic distances to their equivalent mapping lengths.

In essence, all observations and control values must be in a single SPCS zone before any standard traverse computations are performed in step three. After the coordinates are adjusted in the primary zone, the adjusted coordinate values can be converted back to the second zone using steps four and five, and from these values the adjusted observational values derived.

As shown in Figure 2, the NGS control stations of Milford and Montague are extremely close but in two different SPCS zones. Milford is in the Pennsylvania (PA) North zone, which is zone 3701, while Montague is in the New Jersey (NJ) state plane coordinate system zone, which is zone 2900. The surveyor connects these two stations with a traverse. Now the surveyor must adjust the traverse observations to achieve geometric closures. At the end of the project, the surveyor needs to supply the two state DOTs with SPCS coordinates that are appropriate for their location.

Using the geodetic coordinates of Montague and the geodetic tool kit software, the surveyor now computes the equivalent PA North zone coordinates for Montague, which are determined to be (129352.324, 846126.042) with a convergence angle of 1°56´39.68˝.

For this entire procedure the only thing you must remember is that all observations and coordinates must be in the one map projection system before any traverse computations are attempted.