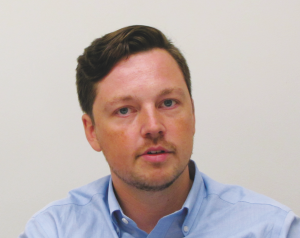 Aaron Morris earned his doctorate in robotics at Carnegie Mellon University, where robotics and related research and enterprises are continuing to increase in prominence. Morris formed Allpoint Systems in 2009 in CMU’s hometown of Pittsburgh as a startup specializing in data processing for 3D for robotics, underground mapping, and additional applications. He was soon joined by fellow CMU grads, and they worked on lidar cloud-to-cloud registration—the exact technologies the AEC industry needs for mass reality capture.

This work was noticed by Autodesk, which acquired Allpoint systems. Thus, Morris and his team were the brains behind the brains that made the popular ReCap 360 companion to the Leica BLK360 scanner.

Not one to rest on his laurels, Morris has since co-founded another reality-capture and autonomous-data-analytics company: Allvision IO. We may not see robotic surveyors in the near future, but many of the technologies being developed to support the broad field of robotics will certainly find their way into surveying and mapping solutions, and Morris will definitely continue to positively influence geomatics.