An old imaging technology is outdated for use on Earth, but it’s the perfect fit for today’s remote-sensing needs on Mars.

Since 1960, at the dawn of the space age, humankind has launched dozens of missions to Mars, from brief flybys to orbiters that traveled around the Red Planet for years. On five of NASA’s missions there—in 2000, 2004, 2008, 2012, and the current InSight mission—the imaging sensors on its cameras were made by Teledyne DALSA, a Canadian manufacturer of digital imaging sensors and semiconductors, in collaboration with NASA’s Jet Propulsion Laboratory (JPL).

InSight—short for Interior Exploration using Seismic Investigations, Geodesy, and Heat Transport—launched from Vandenberg Air Force Base in California in May 2018. Six months later, it landed in a sand-filled crater on Mars’ Elysium Planitia, or equatorial plain, and immediately began surface operations, sending photographs back to Earth.

The cameras on the InSight lander will help scientists and engineers choose where to place instruments on the surface of Mars; these instruments will help them study the interior of Mars to “answer key questions about the early formation of rocky planets in our inner solar system—Mercury, Venus, Earth, and Mars—more than 4 billion years ago,” according to the official mission website. 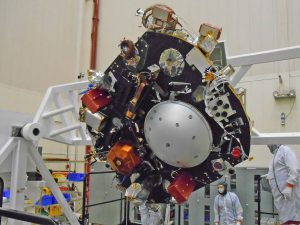 The large circular part of the science deck is the protective covering to be placed over the seismometer after it’s placed directly onto the Martian ground. Credit: NASA/JPL-Caltech/Lockheed Martin.

The company, which has about 1,000 employees worldwide and was originally known as DALSA, began making charge coupled devices (CCDs) in 1992; these convert light into electrical signals that travel 54.6 million kilometers back to Earth where they are converted into digital pictures (more on them below).

To boost its production of CCDs, in 2002 it acquired a semiconductor foundry in Bromont, Quebec, that had mainly made complementary metal oxide semiconductors (CMOS) since the 1970s but now mostly makes micro-electro-mechanical systems products—such as pressure sensors and gyroscopes.

Teledyne DALSA now builds sensors and cameras for machine vision that are used for quality inspections, medical imaging, Earth observation, and other remote-sensing tasks. In 2011, it was acquired by Teledyne Imaging and is now part of its aerospace and defense group.

CCDs for the InSight Mission

The color CCD image sensors that Teledyne DALSA built for the Mars InSight lander, which are 15mm x 27mm and use 12 micron pixels, are much bigger than the CMOS used in consumer cameras, which have pixels that are only one or two microns in size.

“It is very different in architecture and design,” says Robert Groulx, Teledyne DALSA’s CCD product manager. He has worked in semiconductor R&D process development since 1985. In 1992, he began to develop a CCD for DALSA in Waterloo, Ontario.

InSight’s CCDs are the size of a postage stamp but are key to the operation of the InSight $814 million mission. While CCDs are not new technology, they can withstand the violent shaking of takeoffs and can work in temperatures that average about -60 C at the Mars equator during the winter.

“Also, you don’t need a high-resolution imager because the camera is mounted on a robotic arm, and you can take multiple pictures and stitch them together back on Earth. It is easier to send these individual files than, say, a 60MP image at once.”

Both cameras collect 1MP images, using color filters, and their primary function is to help with the placement of other instruments. The ICC will provide 3D color views of the landing site, instrument placement, and activities to inform engineers and scientists of the best spots for the seismometer and heat flow probe to gather measurements from the interior of Mars. 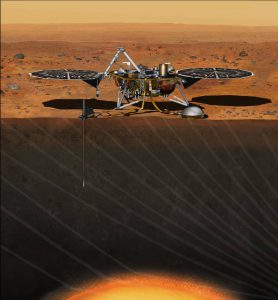 Teledyne DALSA began working with JPL on sensors in 1999. “We did many wafer [production] runs with them, but the main one is the one megapixel frame transfer device,” says Groulx.

Teledyne DALSA’s work on the InSight mission began in 2013. “JPL wanted a color version of the CCD they had used on past missions—Spirit, Opportunity, and Phoenix,” Groulx continues. NASA was in a hurry to get those sensors, he explains, because the InSight mission was supposed to launch in 2016. (It was then delayed because one of the instruments wasn’t ready.)

“It wanted to take color photos, but the lander would have only two cameras, and neither of them could be a color camera, which is much larger. However, it could use black and white sensors that can take multiple images with different color filters.”

While the new color filters had to be space-qualified, the camera’s basic electronics were the same as for previous models, so they were already space-qualified.

“We knew from the users of those color filters that the potential for qualification was good because we used them on the Teledyne DALSA sensor for many, many years and we know the CCDs work. However, we never sent them in space, so JPL had to make sure that those color filters would endure the trip to Mars.”

Starting in 2000, Mark Wadsworth and Thomas Elliot, both at JPL, designed the CCD. However, in 2013, when more CCDs were needed and NASA wanted color filters on them, Wadsworth and Elliot were not available, so Teledyne DALSA designed part of the CCD with the aid of the previous design. Raymond Frost, at Teledyne DALSA, designed the color filter, then JPL reviewed this design.

What was different about the InSight mission compared to previous collaborations with JPL, Groulx explains, was the design work that he and his colleagues at Teledyne DALSA had to do for the color filter. Additionally, he points out, the schedule was very tight because of the 2016 initial launch date and because the CCDs were fabricated using new equipment.

Read the author’s story about photogrammetry on Mars here.