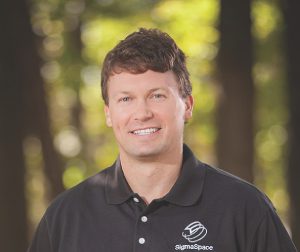 Spencer Disque has been with Sigma Space Corporation since 2009. Starting as a mechanical engineer, he designed airborne and spaceborne science instruments for NASA projects and supported them for field campaigns. He also supported design and flight testing of single photon lidar (SPL) in the infancy of the program. Over time, Disque assumed greater responsibility and became systems engineer of the SPL program, in charge of the engineering side of the technology. He has also assumed the role of mechanical engineering department head, which involves oversight of the Sigma Space CNC Machine Shop.

Disque was nominated because he is passionate about SPL technology. He doesn’t avoid challenges, but tackles them head on and does so methodically and thoughtfully.  As systems engineer, Disque is able to interact intelligently with all engineering disciplines the Sigma team represents. He helps establish the common language in which all the technical teams are working, and he’s a great mentor for other engineers on the team.  Disque sets an example for working with agility, excitement, and creativity.