We highly recommend this series for the techie and non-techie alike. It’s a mix of the story of a fictionalized first Mars colony, set only a few decades forward in this century, interspersed with interviews of scientists and space-exploration experts. Documentary segments are about contemporary Earth-bound science issues that such an undertaking would need to confront.

Depictions of the activities of these fictionalized pioneers and, in particular, engineering challenges they face are presented with technologies only slightly advanced over today’s. Part of the appeal of the series is in its relatability to our present reality and the prospect of an endeavor so grand that we might see in our lifetimes.

xyHt has delved into “surveying on Mars” many times: our February 2017 cover story entitled “Surveying on Mars“, in our Pangaea newsletter, in Located entries, and in our inaugural cover feature. We noted, as is depicted in the series, that most of the engineered materials and equipment would be 3D printed on Mars, except for some specialized instruments. While off-the-shelf Earth surveying instruments would not be suited for the Martian conditions, the use of Mars-ready close-cousins to the instruments we use every day could be a common sight.

In the above scene from episode 1 of season 2, a water and power conduit is under construction to connect the science-centric first colony to that of a new mining site. Note in this frame what appear to be construction lasers on tripods like those on present-day sites.

In another scene from episode 1 of series 2, first colony commander Hana Seung meets the new mining colony chief and notes, “I see you are surveying.” The tripods are being set up, and the instrument adjacent to the commander looks a lot like an auto-level. 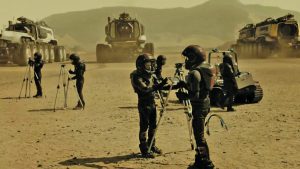 When we contacted NatGeo for these photos, they were impressed that surveyors and other professionals have been paying attention to such details. While we were unable to confirm (yet) what instrument was used as a prop (current consensus is that it is probably a Nikon), a real Mars-compliant instrument would likely need to be specially designed and manufactured. Oh, but no wooden tripods.