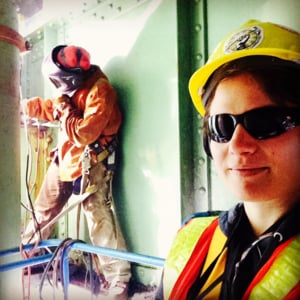 We met Lorien Barlow at Autodesk University, where she wowed us with a passion and desire not motivated by financial or personal gain—waiting tables or whatever it took to make her project come to fruition.

Her first feature-length documentary film, Hard Hatted Woman, is about women breaking gender barriers in blue-collar construction trades. Barlow interviewed tradeswomen from all over the country, visiting construction sites from coast to coast to film them working. She has also traveled to AEC national conferences and met industry and union leaders, labor activists, and organization leaders. The film is currently in post-production.

Barlow earned a master’s in education from Antioch University, New England, and has tutored secondary-school students and taught photography classes.

As a filmmaker, she serves as a brilliant example of promoting the important work of AEC as a career path for young people—possibly an unconventional, unexpected path for women­—yet the work is crucial to development and can be the perfect fit for many young women (and men) who haven’t yet considered it.