You don’t have to work for huge organizations, such as the U.S. Air Force or the U.S. Forest Service, to appreciate the benefits of customized geospatial exploitation services or capabilities. Even small companies and public agencies are increasingly challenged with extracting meaningful, accurate, and actionable in- formation from the flood of imagery generated by satellites, UAS, and terrestrial scanners. 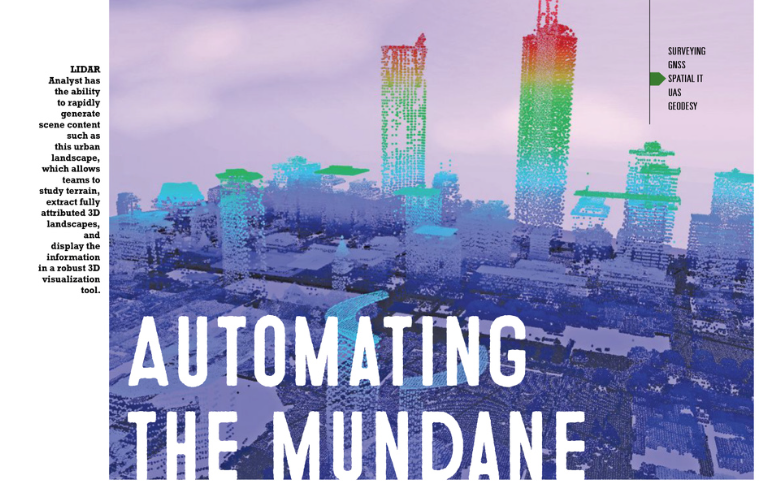 As the volume of this geospatial data grows exponentially, analysts need to focus on the most relevant data for them from potentially hundreds of images a week of the same geographic extent. Tools initially developed for large national agencies are increasingly automating their more mundane tasks so as to better enable the agencies to focus on making those decisions that computers are not yet capable of making.

For nearly a quarter century, Textron Systems’ Geospatial Solutions Business Unit has been providing the core imagery exploitation capability for the National Geospatial- Intelligence Agency (NGA), its primary customer, and its precursor organization, as well as building a variety of other geo- spatial exploitation capabilities. It differentiates itself from its many competitors in the geospatial industry by “pro- viding precise geospatial data and being able to handle large amounts of data,” according to Matt Morris, the company’s director of Integrated Solutions.

Morris, who has been with Textron for 15 years, started as a software engineer spe- cializing in automated feature extraction technologies and helped to build some of the core products that the company continues to support today. He then transitioned to overseeing its Integrated Solutions department, which focuses on military and commercial contracts to build customized ge- ospatial exploitation services or capabilities.

As a segment of the larger Textron entity, Textron Systems focuses on providing solutions for the defense, homeland security, and aerospace markets. “The breadth of our capabilities is pretty far-reaching, but our core areas are in the unmanned aircraft systems, our Shadow and Aerosonde platforms,” Morris points out. In addition to its Geospatial Solutions business unit, Textron has business units that build intelligence solutions for the Army, build testing and training systems for aircraft and UAS platforms, and provide performance- based logistics for a variety of military programs.

What is now Textron Systems’ Geospatial Solutions Business Unit used to be Overwatch Systems, based in Missoula, Montana, where it still has an office.

It also builds a variety of other geospatial exploitation capabilities, including Feature Analyst, LIDAR Analyst, and several add-on capabilities for RemoteView that deal with processing full-motion video data, 3D modeling, and simulation. One of Textron’s products allows interoperability to Esri’s ArcGIS product suite; another one, a data-management and data-indexing program called GeoCatalog, allows organizations to index and retrieve geospatial data through a variety of associated metadata.

“All of these technologies are focused on providing optimized work flows to deliver precise, actionable intelligence products,” says Morris.

Focusing Users on the Key Data

The volume of geospatial data is growing exponentially, as traditional U.S. government sources and aerial collection are supplemented by a growing variety of commercial platforms, such as small sats and UAVs. Therefore, a major challenge for analysts is to focus on the data that matters from potentially hundreds of images a week of the same geographic extent.

“We have to provide solutions that work very efficiently and also look to derive more data-analytical services to queue users into the subset of data that exhibits some type of relevant change,” Morris explains.

To this end, Textron focuses on how to create the right set of data analytics and digitalization tools out of the various capabilities that span its products. “Remote-View,” Morris says, “provides analysts with precise geo-coordinates from a variety of satellite or aerial platforms and then allows them to pro- cess large amounts of data rapidly.” 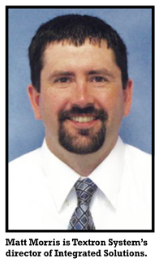 “We tie into that by being able to consume the imagery data feeds or full-motion video data feeds to produce highly accurate actionable intelligence reports,” says Morris. If the remote pilot of a UAS that is flying over hostile territory sees something of in- terest in the FMV feed from the platform’s high-resolution camera, Textron’s system can extract the location’s coor- dinates. They are not as precise as those that traditional imagery analysts are used to because the platform itself is being buffeted by the wind. However, Morris points out, his company’s software allows pilots to take snapshots of areas that require further analysis.

“They can bring it into our RemoteView and tie it in with what has a good geospatial referencing system—such as commercial or national data or background maps. They can fuse the real-time collection with the overhead images to get the precise geocoordinates, as well as notate ingress and egress routes, lines of com- munication, etc., to produce a very rich intel product that can be shared.” This broader view also provides better context because often UAS are focused on small areas.

“There is a misconception in the market space that the software problems have been solved, that automated feature extraction exists and works perfectly, but the fact is that it doesn’t.”

As Feature Analyst ingests images, it is able to recognize features, such as vehicles on an airstrip, based on training examples. An analyst might use this data analytics capability to automatically count the number of those features in an area. In another scenario, Lidar Analyst can be used to do near real-time mission planning by ingesting lidar data and automatically generating 3D models of the terrain, trees, and buildings. Many non-military government and commercial organizations also use Feature Analyst and Lidar Analyst. Among them, Morris cites the U.S. Forest Service and the U.S. Bureau of Land Management, who use the tools to recognize and map natural features, such as certain types of vegetated areas or water bodies. Commercial mapping companies also use those products to produce data.

“LIDAR Analyst is good at identifying basic 3D buildings, more of a 3D block, which often is really all you need for basic planimetric analysis,” Morris says. “We also have many users that use it for just planimetric identification. We have more than 14,000 active licenses of our products, spanning both the military and intel market space and the commercial market space, so, the uses are pretty broad.”

Change Detection, the Cloud, and 3D

RemoteView, Textron’s flagship product, provides the core imagery-analyst capability for the NGA and their mission partners throughout the world. It is also used by all branches of the U.S. armed forces.

“The core of RemoteView is to provide all your standard imagery exploitation tools, imagery enhancement, smooth panning and roaming throughout incredibly large datasets, without any visual tearing or stutter,” says Morris.

An extension called Virtual Mosaic stitches together multiple images to create mosaics. A “soft-copy search process” expedites change detection by enabling users to compare before-and-after images by means of a two-color (red and blue) view, blending and flickering the images, or swapping them.

“You have a full set of annotation and reporting tools,” Morris says. “So, as you mark up an image, you can create your own custom template to produce an intel product. You can publish that to PowerPoint, PDF, or Google Earth (via KML/KMZ).”

To take these exploitation capabilities to the cloud, Textron has developed a product called RVcloud that puts some of the core features of RemoteView into a web interface. “So, instead of using your traditional thick client RemoteView, users are now able to exploit imagery through Internet Explorer or Google Chrome,” Morris explains.

“Building on RemoteView, then, we get into the extensions, which are to provide add-on capabilities to either handle different scenarios or different types of data: RVSAR enables you to exploit SAR data and RVConnect provides a bridge between Remote- View, which is very much geared toward imagery analysis, and ArcGIS, which is very much geared toward GIS data production.”

To enable users to move traditional 2D image analysis into 3D, Textron developed 3D Pro. It lets you overlay an image on the underlying terrain and then do 3D analyses—such as line-of-sight, viewshed, and fly-throughs. It also facilitates mission planning and rehearsal and the creation of 3D intelligence products, such as 3D PDFs or OpenFlight models.

To help users tie all the data together, organize it, and make it searchable, Textron created GeoCatalog. “It will take in imagery, lidar, elevation, and GIS foundation data, and create a searchable index that users can look at through an interactive map to pull out what data they have in a specific area that meets certain requirements, in terms of cloud cover or ground sample distance, etc.,” says Morris. 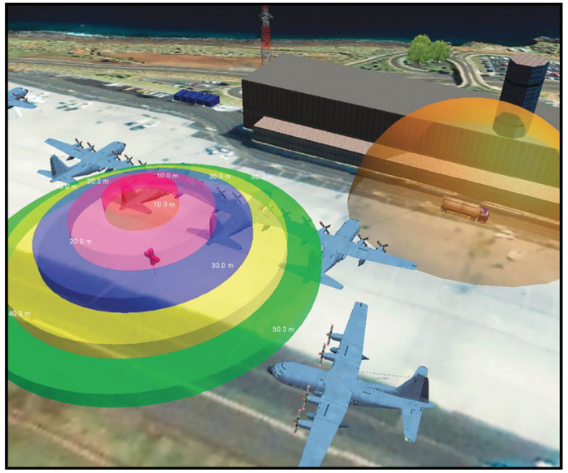 A constant challenge for geospatial software is keeping up with the growing capabilities of data-collection hardware. “If DigitalGlobe launches a new satellite, such as WorldView-3, we have to adapt our software to be able to handle that imagery format, so that users can maximize that data,” says Morris. “We also have to make sure that our software performs well. They are collecting larger areas and with more depth; they are creating huge single images. We have to make sure that our software processes them in an efficient way to allow users to review them.”

Geospatial software vendors also face rapidly escalating user expectations. “There is a misconception in the market space that the software problems have been solved, that automated feature extraction exists and works perfectly, but the fact is that it doesn’t,” says Morris.

“We’ve developed some great automated feature-extraction solutions, there are some other ones in the market space that certainly provide an assisted capability, but we are far from having a piece of software that can analyze and make intelligent decisions on the problems that our users face. We cannot automatically recognize everything that exists in an image and then do predictive analysis on it.”

What is possible, he concludes, is to extract some of the more readily identifiable features so as to reduce the monotony for analysts. “We have to find ways to automate the mundane so that they are focusing on making the decisions that computers are not capable of making today.”