The U.S. Army Corps of Engineers, under the direction of FEMA and in partnership with the California Governor’s Office of Emergency Services, removed more than one million tons of fire-related debris. Credit: Carol Vernon, Public Affairs, Pittsburgh District, USACE.

In October of 2017, numerous, fast-moving wildfires erupted and burned throughout Northern California, including Napa, Lake Mendocino, Sonoma, Solano, Yuba, and Butte counties. More than 245,000 acres of land were burned; there were 43 casualties; and more than 10,000 structures were destroyed or damaged.

All this created the largest debris cleanup in California’s history since the 1906 San Francisco 7.9 earthquake.

The Federal Emergency Management Agency (FEMA) called upon the Army Corps to execute the massive debris removal mission. The Army Corps worked under the direction of FEMA and in partnership with California’s Governor’s Office of Emergency Services, as well as other federal, state, and local agencies. 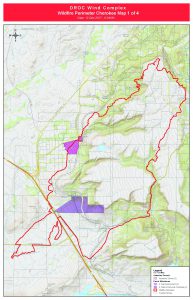 Regarding the makeshift tents that started rising on the charred landscape immediately after the fire, Marzena Ellis, a hydraulic engineer with the New York District, U.S. Army Corps of Engineers, said, “Residents didn’t want to leave their property.”

They were holding onto the lives they had before the wildfires, and Ellis was there to help them rebuild those lives.

The debris clean-up mission was performed in two phases. For phase one, the California Environmental Protection Agency and the California Department of Toxic Substance Control moved in to remove household hazardous waste. Next, the Army Corps and CalRecycle—California’s Department of Resources Recycling and Recovery—cleared the property lots of ash and fire-related debris.

To assist with the debris-removal process, Ellis created maps and performed critical analysis using GIS. She performed this work in collaboration with Arcadis U.S., Inc., a global design, engineering, and management consulting company. The information was used by decision-makers in every stage of the mission to perform environmental assessments, debris hauling, and the final cleanup.

During the debris-hauling process, the total quantity of debris and asbestos was determined; as of June, 2.2 million tons of debris have been removed from more than 4,500 properties. 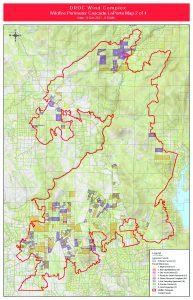 Ellis also created a wide variety of maps that aided in the cleanup of hundreds of private properties with owners signed up for the Consolidated Debris Removal Program. The maps were used for debris-hauling routes, safety awareness, and mission status.

Debris-hauling route maps provided the Army Corps and CalRecycle with the most efficient and safest routes around difficult terrain to navigate for dumpster trucks and excavators. Wildfire debris such as downed trees created narrow, unsafe roads and steep terrain.

Safety awareness maps highlighted properties that had special circumstances noted during the debris-removal process. These maps were used by the field and supervisory staff for decision-making.

To create these maps and perform analysis, Arcadis crews collected data from the field throughout the lifecycle of the mission. For example, property site-assessment data involved counting buildings on the site, noting any hazardous materials and situations on the site, and taking air-monitoring measurements.

In addition, Arcadis collected soil samples for testing to ensure the soil was safe for rebuilding. If the site was safe, then erosion control was installed on the property before releasing the land back to the owners.

Ryan Miller, a GIS analyst with Arcadis, said, “By combining our various GIS skillsets and working in collaboration, we were able to quickly formulate action plans and deliver the GIS results requested by crews in the field, including Arcadis field crews and CalRecycle.”

CalRecycle greatly appreciated their work. Todd Thalhamer, operations chief, said, “The GIS system used by the Army Corps was critical in planning the incident and determining resource allocation. Our team worked with the Army Corps to identify where the burned structures were located in each county, the proximity to environmental receptors, location of schools, and to develop an overall plan for the deployment of resources.”

He continued, “In a disaster of this size—over three counties—it was critical to have the most current intel on where the impacted structures were located.”

Miller added that because of the large number of entities working on this mission, sharing information and having the latest data was important. He said, “It was a common sight throughout the weeks to see supervisors from CalRecycle, FEMA, Arcadis, and private debris-hauling contractors all reviewing the maps we created during their discussions of planning and decision making.

“By providing these benefits to the project, we helped to move it forward and meet the rapid response timeline so that the residents and communities affected by the wildfire could begin rebuilding.”