sUAS provide data for response to an unstoppable disaster.

To most people living in Hawaii, it is not unusual to hear of an active lava event somewhere in the islands at any given time. Despite the nearly 70 earthquakes of magnitude 2.5 or stronger a week prior to the Kilauea lava event, it might have been just another casual week.

On May 3, 2018, Kilauea residents started reporting, “Lava! There’s lava coming out from my backyard!” Within a matter of weeks, hundreds of homes were destroyed. It was an event that is difficult to imagine for most living on the mainland.

What can we do when something so mighty like this happens? The answer might at first appear to be “nothing.” Lava may look like a liquid, but it is unstoppable. It cannot be channeled like how we manage surface water for flood control. Lava decides where it wants to go, and it devours everything in its path.

Dr. Ryan Perroy is an associate professor at the University of Hawaii at Hilo (UH Hilo). He is also the head of the Spatial Data Analysis and Visualization (SDAV) Research Laboratory at the university. His lab uses various remote sensing and photogrammetry techniques to record and map landscapes that change over time, from sea-level rise to invasive vegetation dynamics.

Lava flow mapping is the most energy-draining and hazardous activity for the SDAV team members. When USGS and Hawaii County Civil Defense are leading volcanic crisis management activities, the SDAV lab can provide critical lava mapping information for the agencies using sUAS.

Dr. Perroy realized this type of event is an all-hands-on-deck situation; he needed more sUAS pilots on the ground than just the current members at the SDAV labs. He reached out to Nathan Stephenson—a past SDAV labs member and an employee at the Denver office of Frontier Precision Inc.—to ask if Nathan and Frontier would be willing to assist. He also reached out to Victor Rasgado, senior surveyor at Stantec Consulting Services, who also provided equipment and critical surveying expertise.

Brennan O’Neill, the manager of the Hawaii office of Frontier Precision Inc., a provider of surveying and mapping equipment, support, and training, was quick to offer support as well. O’Neill, a geologist, is a veteran of numerous geophysical science research and disaster recovery efforts. He offered some Trimble R10 GNSS base/rover pairs and provided quick instruction so the SDAV team could set ground control and do sundry other mapping tasks. Within a few days, Stephenson traveled back to Hawaii with Frontier Precision Inc.’s blessing and survey equipment.

While the lava charges through hundreds of homes, the SDAV team is ready to capture near real-time data using sUAS at a safe distance. Working together with government agencies that provide helicopter and fixed-wing overflights, geologist ground teams, and other sUAS capabilities, the SDAV team helps provide constant monitoring and coverage of the lava flow.

Many factors change quickly, as the lava can move at 17 mph, which is faster than the average human running. The definition of the safe distance is dynamic, and each of the team members is in a state of high alert over the entire Kilauea lava event. 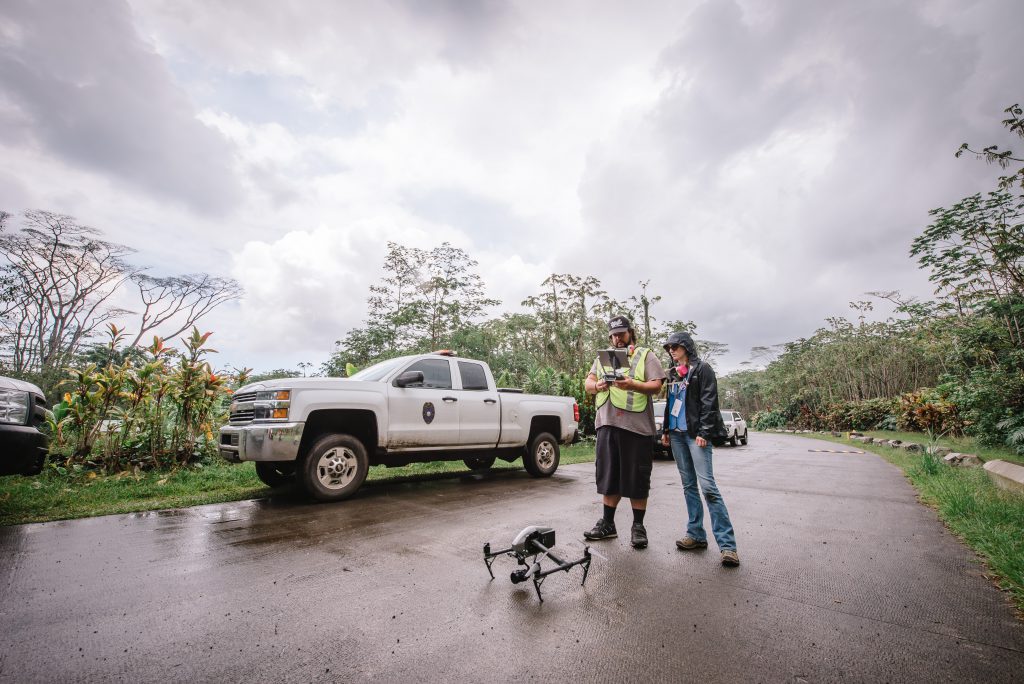 Thanks to recent UAS technology advancements, sUAS can now fly longer to cover larger areas on each flight, withstand higher wind speeds, and pack new infrared cameras (designed for sUAS) to cover the lava flows during the night. The data files captured by a thermal camera are smaller than those of a high-resolution visible camera, so processing time is shorter. Stephenson also noted that the thermal radiometric camera more accurately maps heat signatures, and at night.

All these advancements in UAS technology dramatically shorten the time for the 2018 Kilauea lava mapping data to be made available to decision-makers, shorter than for the Pahoa lava event in 2014, which was the first time SDAV mapped active lava flows using sUAS.

“We need to establish ground control points across the region before the sUAS teams arrive,” explained Dr. Perroy.

The Frontier Precision Inc. and Stantec offices in Honolulu loaned several GNSS base/rovers for setting the ground control points (GCP). The GCPs are used during the lava mapping period and post-event terrain survey; however, often they are destroyed by the relentless lava. This is one of the harsh realities Dr. Perroy and his team face, but the information on terrain deformation is critical for recovery planning and scientific research.

When the GCPs are established in an area, the mapping teams carefully navigate to the closest safe location and prepare to launch the sUAS. The journey to these locations is not easy. The teams are equipped with sulfur dioxide detectors so they can put on a gas mask when there is too much toxic gas in the area.

Sometimes when roads are destroyed, the navigator has to quickly find an alternate way to get to the designated location. The situation is even more dangerous when the safe location is no longer safe, and they must evacuate immediately—often with no easy way out. 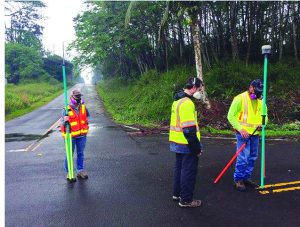 The UH Hilo SDAV red SUV is where photogrammetry magic happens out in the field. It carries multiple sUAS platforms and cameras, safety equipment, and a lot of batteries. In addition, it has a PC that’s powerful enough to process the 1GB of data captured during each 30-minute flight session. The processing time usually is about 15 to 20 minutes with Pix4D’s rapid processing mode (typical processing time is often triple).

Then the processed data is relayed back to the leading agencies on an hourly basis to produce movement vectors for the lava flows. Authorities use previously scanned terrain models (with lidar) in combination with the hourly lava front movement vectors to determine flow rates and direction.

Between each flight, the SDAV team checks the condition of the sUAS to ensure its best flying capability. Fortunately, the FAA granted SDAV and the USGS special permission to fly sUAS at 1000 ft instead of the typical 400 feet above ground limit. This enabled the sUAS to cover more ground and avoid being hit by particulate matter shooting out from “fissures.”

The SDAV sUAS fleet includes a variety of aircraft, including DJI M200 and M600 series aircraft provided by a grant from the National Science Foundation, along with multiple Inspire 1 and Inspire 2 platforms and a custom AeroTestra multicopter to carry a hyperspectral camera. The SDAV team uses a Dell Alienware laptop to run Pix4D in the field, then ArcGIS and ArcMap to overlay county and lava coordinates. Back on the UH Hilo campus they also have a series of high-powered processing computers for more in-depth analyses.

There are many deliverables after the processing, but the orthomosaic map is the primary output for emergency management purposes. Usually, the team would upload data via a mobile hotspot, but sometimes cell towers were destroyed. They would then have to drive to a location with signal and sometimes just text flow coordinates back to the emergency operations center.

As of today—four months later—even though the Kilauea lava event is in a pause, it does not necessarily mean the event is over. At the time this article was written, the USGS still had “WATCH” as its alert level—the second-highest level. The volcano was also still on level ORANGE for aviation. Dr. Perroy and his team from the SDAV labs are still monitoring the area closely, as well as the local authorities.

There are so many others dedicating their time and energy to public safety, and we hope through Dr. Perroy and Nathan’s stories we provided a glimpse into the difficult challenges faced by each person involved in the management of this disaster, especially those who need to be close to the lava.