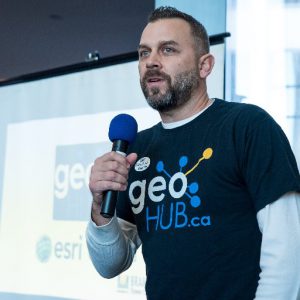 The City of Brampton in Ontario is on the leading edge of vibrant, geospatially charged communities; xyHt receives many nominations for 40 under 40 each year for folks in the connected geo-community there. Matt Pietryszyn received multiple nods, not only for his work with the city and the GeoHub.ca open data portal, but also as a GIS ambassador—promoting GIS and geospatial sciences in K-12 schools and organizing events and activities such as geo “hackathons.”

Pietryszyn has superior code skills but also important people and leadership skills, honed through a diverse career that began with studies in multimedia design at Humber College and a diploma in GIAS from Fleming College. He had a stint editing 3D data for analysis from the NASA/JPL Shuttle Radar Topography Mission and as owner/developer of an online campsite review service, all before joining the City of Brampton in 2003 as a GIS analyst, progressing since then to his current role. Pietryszyn has also been recognized by the Public Sector Journal as one of Canada’s Open City Champions.